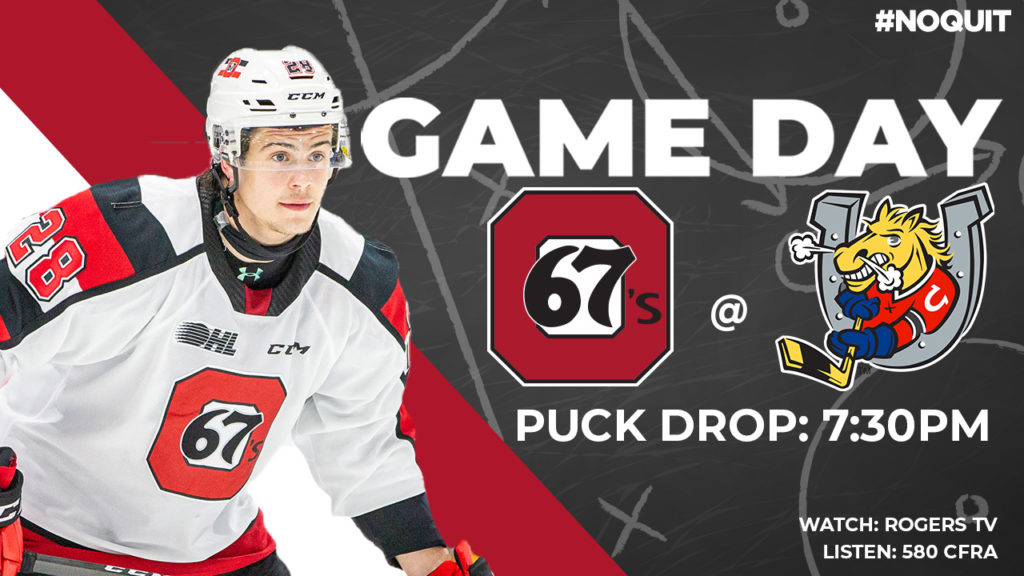 After a tough road trip in northern Ontario a couple weeks back, the 67’s seem to be back on track and back to their usual form following a perfect four-game week that has turned into their latest four-game winning streak.  Now looking to make it five straight as soon as Saturday night in Barrie, the Barber Poles will need to bring their A-game on this trip, as their next two opponents were opponents that gave them a big challenge when they faced off against them last time around.  A nationally broadcasted game on Sportsnet that took place las Saturday saw Ottawa defeat the Colts 4-3 in overtime thanks to Cameron Tolnai’s game winner, in a game that was heated until the very end.  On February 20th, the last time the 67’s visited the North Bay Memorial Gardens, Ottawa was handed what was probably one of their worst losses of the season when they were defeated by a score of 6-2 by the last place team in the OHL.  Both these games still very fresh in the 67’s memories, it’s safe to say that Ottawa will be giving it their all during these two games in order to come out of this weekend riding a six game winning streak.

To do so, Ottawa will need contributions from everyone, but luckily for them, they count on one of the deepest lineups in not only the OHL, but in the whole CHL.  Obviously, they count on the OHL’s top scorer in Marco Rossi, who’s put up 110 (36G, 74A) points in 53 games thus far this season.  Among other 67’s players who are in the OHL’s top 15 most points are Joe Garreffa (84 points), Jack Quinn (83 points), Austen Keating (82 points), on top of Noel Hoefenmayer is tied for league lead for most points among all defencemen (75 points).  In nets, both goalies have been very good for the Barber Poles as of late.  Cedrick Andree has won his last two starts, allowing only four goals doing so, including a stellar 37 save performance against Oshawa last Friday.  On his side of things, Will Cranley has been rock solid in front of the Barber Poles’ net this season, with an awesome 16-2-0-0 record this year.

Having clinched their playoff berth, the Barrie Colts are currently struggling a little bit, having won none of their last four games.  It wasn’t too long ago that Barrie and Ottawa faced off against one another, last Saturday, to be precise, in a game that the Barber Poles took by a final score of 4-3 in overtime.  Barrie may be a young team, but make no mistake, they count on some very good offensive weapons that are a threat to any team in the Ontario Hockey League.  The player to watch for on the Colts in 2020 NHL Draft prospect Tyson Foerster, who’s had an outstanding season with 32 goals and 42 assists for 74 points thus far.  Last weekend, Foerster had a goal against the 67’s in a very close contest.  Another player to watch from Barrie, for many obvious reasons, is Brandt Clarke, brother of 67’s forward Graeme Clarke.  Brandt was the third overall pick in the last OHL Priority Selection Draft and has been able to put up great numbers in his rookie year, combining 5 goals and 30 assists for 35 points this year, the first of a very promising OHL career.