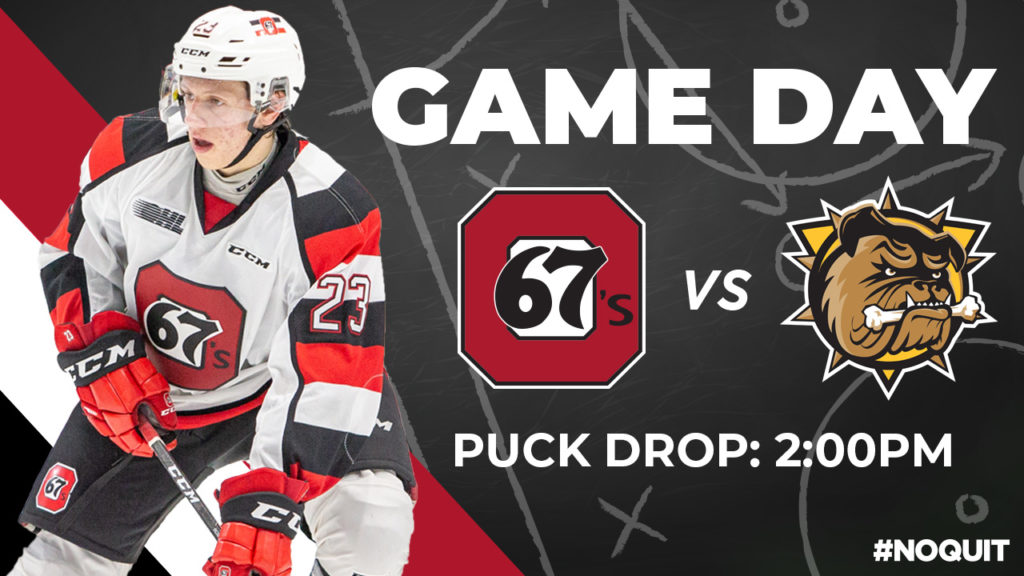 Sunday October 20th vs Hamilton Bulldogs @ 2 PM
It’ll be on an active two-game winning streak that the Ottawa 67’s will head into this week-end, which will see them play two home games against tough opponents in the Peterborough Petes on Friday night and the Hamilton Bulldogs on Sunday afternoon. Friday night’s game will have be a little extra special for fans of the hit TV-series Friends, as the game will be themed after the popular 90’s sitcom.
Off to a good start this season, the 67’s currently have a record of 6-3-0-0, with only one loss at home so far, occurring on the home opener against the Petes. The Barber Poles will look to avenge that loss, but also to keep their two-game winning streak going.
Offensively, Mitch Hoelscher has been breaking out, with the best start to a season of his career. In 9 games so far this season, the New Jersey Devils prospect has piled up 14 points, including 6 goals. Defenseman Noel Hoefenmayer has 10 points, while fellow OA Austen Keating has 12 points, both in 9 games as well. Not to mention Marco Rossi, who has been lights out with 9 points in only 4 games this year. The Barber Poles have the firepower upfront, but now with injuries to Graeme Clarke and Merrick Rippon, it’ll be interesting to see who steps up into their roles. Rookie defenseman Teddy Sawyer made a good impression during his first couple of games, while young guys such as Jack Beck, Thomas Johnston and Dylan Robinson will be looked at to step up and try to fill the void, along with the other veterans, that is left in the group of forwards by Graeme Clarke.

Hamilton Bulldogs (4-5-0-0)
Swept by the Barber Poles in the first round of the OHL Playoffs last season, Hamilton is coming into this year with an improved, yet still young squad. The biggest name on this team is without a doubt forward and Los Angeles Kings second round pick Arthur Kaliyev, who has put up a whopping 19 points in 9 game, good enough for second best in the OHL. Kaliyev leads the Bulldog’s attack, along with Jan Jenik, who has 14 points in 7 games and with 2020 NHL Draft eligible Logan Morrison, who has 7 points in 6 games. The situation in goal may not be the best it’s ever been right now for the Bulldogs, but 67’s fans will remember young goaltender Zachary Roy, who saw some action during the playoffs last year and looked really good. This team may not be at the level where they would like to be yet, but with as much talent and youth as they have, it would be a mistake for any OHL team to look past them.

NOTES
– Over the course of this week end, the 67’s will go up against three players that are among the OHL’s top three in points: Arthur Kaliyev (2nd in the OHL with 19 points) as well as Nick Robertson and Semyon Der-Arguchintsev (T-3rd in the OHL with 18 points).

– Ottawa’s Mitch Hoelscher has put up 2 game winning goals since the start of the season, while Peterborough’s Nick Robertson has 3.

– 67’s forward Marco Rossi has scored at least one point in all of the four games he’s played this season. Rossi had a three point game last time around against Kingston, with 2 goals and 1 assist.

– After being pulled early in the first period last game, fans can expect a big bounce-back type of week-end from Cedrick Andree. Andree currently has a record of 4-2-0-0 this season, with a GAA of 2.98 and a SV% of .909.