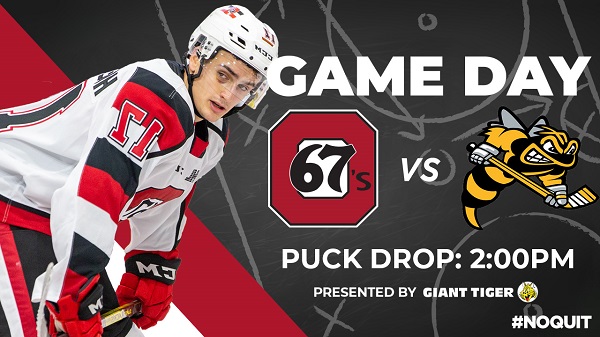 Following a win on Friday against the Rangers the Ottawa 67’s will look to keep the momentum going in their favour with another Sunday afternoon game against the Sarnia Sting. Ottawa native Sam Bitten and the Sarnia Sting will be in town.  Bitten was traded from the 67’s to Sarnia over the summer.

The addition of Garreffa proved to be a good addition right off the bat, as he had a goal and two assists in his very first game in Barber Poles.  On a line with Marco Rossi and Austen Keating, the three skilled forwards combined for a total of 10 points, including an impressive five assists from Rossi.  With a little bit more depth upfront, the 67’s now have more firepower to count on, which became a necessity after Graeme Clarke went down to injury.

Now at third in the East Division, the 67’s will look to build on the momentum they built and keep climbing the standings.

Ninth overall in the OHL, the Barber Poles have allowed 36 goals so far this season, which is tied for third-least amount of goals let in by a team.  With the offense picking things up now, Ottawa is definitely a team on the rise and will look to finish the month of October with a strong note this week end.

In the bottom tier of the OHL, Sarnia has had a rough start to the season with only three wins.  The Sting are currently turning things around, however, as they are on a three game winning streak, in which they have outscored the opposition 21-10 in their past three games.  Before coming in Ottawa for Sunday’s game, the Sting will however travel to Peterborough to take on the Petes on Thursday, before heading to Kingston to face off against the Frontenacs on Friday.  Up front, Sean Josling has been Sarnia’s leader with 20 points in 10 games.  Acquired from the Soo Greyhounds early in the season, Ryan Roth has also been good with 10 points in 5 games for the Sting.  Other players to watch for Sarnia would be 2020 NHL Draft Eligible Jacob Perreault, as well as ex-67’s forward Sam Bitten, who has put up 8 points in 10 games with his new team so far this year.