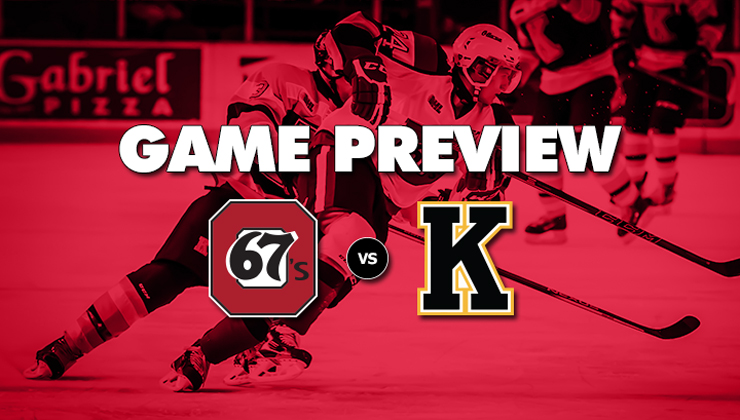 The 67s are back from their holiday break tonight against the Kingston Frontenacs. Opening puck drop at 7 p.m. from the Rogers K-Rock Centre.

These East Division rivals hook up in the second game of a home-and-home series with a 10-day layoff between the contests. This will be their fifth meeting of the season and fourth in just over a month.

Ottawa took the first two match-ups, outscoring the Fronts 8-3 through 120 minutes of divisional play. Though the last two games have told a different tale, the 67’s fell to Kingston twice in December and evened their season series at 2-2.

Tonight’s meeting marks the halfway point of the 2015/16 Ontario Hockey League season and with the Frontenacs holding a 10-point division –and conference– lead, the Barber Poles will hope to execute a statement game against Kingston.

Both teams will have to compete without some of their top-end talent, as Travis Konecny and a trio of Frontenacs are playing in the 2016 IIHF World Junior Championship.

Defenceman Roland McKeown and LW Lawson Crouse are alongside 67’s captain Konecny with Team Canada. They just defeated Switzerland 3-2 in a shootout and move to 1-1 in the tournament.

Crouse racked up two assists against the Swiss and scored a goal against Denmark yesterday. Konecny recorded his first WJC point on that marker, earning the primary assist.

Fronts forward Juho Lammikko is also at the WJC, suiting up for host nation Finland.

With their captain away, Ottawa will have to rely on a team effort in the offensive zone. Dante Salituro, the the 67’s second leading scorer, is only three points away from Konecny’s 45 and leads the team with 21 goals.

Making the most of the extra ice time, for both teams, are rookies Austen Keating and Jason Robertson. Keating, Ottawa’s first round pick this year, has eight points in the past seven contests and has found a home in the 67’s top six forwards.

Robertson, the last 16 year-old to make the Fronts out of training camp, has been even hotter of late. The left winger tallied nine goals and four assists in eight games this month. He looks to be a legitimate offensive threat for the Fronts, who seemingly have a great amount of depth up front.