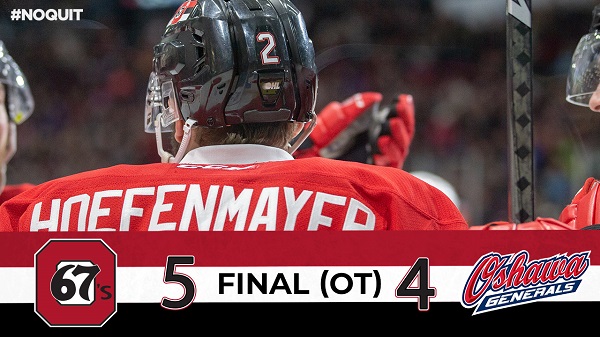 It took 25 games for 67’s rookie Jack Beck to finally score his first goal(s) in the Ontario Hockey League, but when he scored two goals against the Oshawa Generals on Friday night, he made sure he made them count. Just before he and his teammates head home for the holidays, the first year player tied the game in the back half of the third period, before giving the 67’s the win in overtime. The other goals scorers for Ottawa in this winning effort were Jack Quinn and Noel Hoefenmayer.

Quinn scored the opening period’s only goal 4:44 minutes in, as the Barber Poles took advantage of a power play to gain a 1-0 lead after 20 minutes, thanks to Quinn’s 19th of the season.

After a rather calm first period, the two teams went back to what they had accustomed fans to for when they face off: an exciting game of hockey. A total of five goals were split by the two sides in the second, as Allan McShane tied things up at one halfway through, before Noel Hoefenmayer went on to score two goals in under two minutes, giving Ottawa a two goal edge. Jacob Winterton and Dawson McKinney scored goals of their own before the buzzer sounded, sending teams to the locker rooms with a tied score of 3-3.

Oshawa’s Brett Neumann gave the Generals their first lead of the hockey game at the 7:33 mark of the third and final period. The hosts protected their lead well, for a total of just about five minutes, as 67’s rookie Jack Beck snapped home his first OHL goal, coming in his 25th game, tying things up with 7:35 remaining in the game. Both teams would look to score the game winner before time expired, but overtime would be necessary. After the two sides traded scoring chances, the rookie Beck would jam home Adam Varga’s rebound for his second of the game, a goal that sends he and his teammates with a smile on their face for the holidays.

The 67’s will look to extend their winning streak to 12 games when they come back from a short Christmas break, when they visit the Kingston Frontenacs on Saturday, December 28th. The 67’s will then host the Peterborough Petes the very next day inside The Arena at TD Place at 2:00 PM.

GAME NOTES
Lots of shots were thrown on net by both sides, as Ottawa outshot the Gens 36-31.
Cedrick Andree made 27 saves for his 16th win of the season.
Special teams were a factor in this one, as both teams went two for four on the power play.
Hoefenmayer’s 14th goal this season now puts him only two behind his 16-goal total from last season, which was the best of his OHL career.
Joseph Garreffa had a great night for Ottawa, finishing the game with three assists.