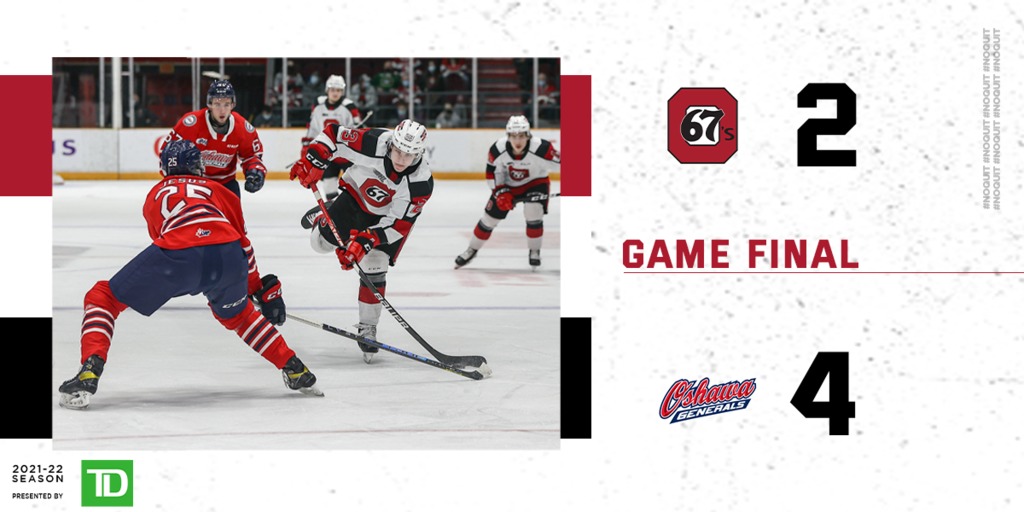 Despite a valiant effort, the Ottawa 67’s came up just short against the Oshawa Generals, Friday night.

Alec Belanger opened the scoring just 29 seconds in, and Thomas Johnston found his seventh of the season in the second period, but a Ty Tullio hat trick, and a late empty-netter would give the Generals enough steam for a 4-2 victory. Max Donoso made 25 saves in his third career OHL start.

Ottawa came flying out of the gate, taking the attack to Oshawa off of the opening face-off. After some strong cycling down low, Johnston got the puck to Cam Tolnai, who found Belanger at the point and the 19 year-old rifled a bullet of a shot over the shoulder of Zachary Paputsakis for a 1-0 lead.

Tullio scored his first of three, at the 7:43 mark, though, and added another on the powerplay just shy of five minutes later. He continued to pour it on in the second — a period where the 67’s saw more than a few glorious chances of their own — completing the hat trick with 3:41 remaining on the clock.

The Barber Poles finally broke through soon after. Tolnai made a pass across the blue line to Ranvir Gill-Shane, who let go a quick wrist shot. Paputsakis made the initial save, but Johnston was parked on the doorstep to bang home the rebound, and make it a 3-2 game.

With time winding down, Ottawa was awarded a five-minute powerplay, and pulled Donoso for the extra attacker, but a David Jesus empty-netter all the way from the Oshawa goal line iced this one with a minute remaining.

Up Next: Ottawa heads into the Christmas break after an afternoon matchup at home, tomorrow, with the Barrie Colts. Puck drop is set for 2:00pm EST.