Get to know your Ottawa 67’s Prospects 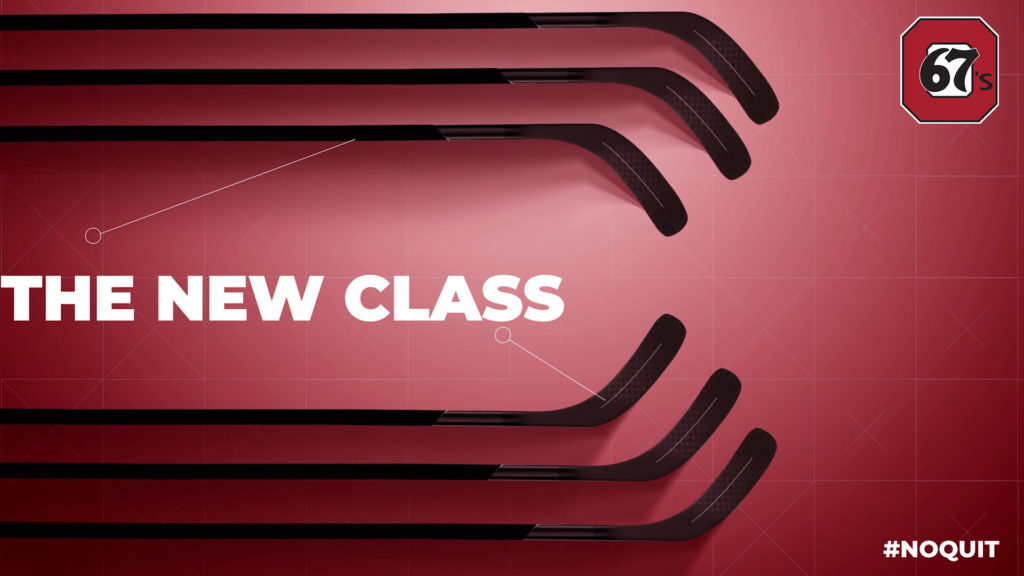 Each week we will be introducing one of the new Ottawa 67’s Draft Picks from the 2020 OHL and U18 OHL Draft!

Moldenhauer is a 5-foot-9, 154 pound right-winger who played a pivotal role with the Toronto Titans Minor Midget AAA this past season, putting up over a point a game with 23 goals, 16 assists for 39 points in 33 games.

With their second pick in the draft, the 67’s selected Brady Stonehouse, a left-hand shot winger who put up no less than 54 points (22G, 32A) in 32 games this year with the Elgin-Middlesex Chiefs.  Stonehouse also had a great postseason with 15 goals and 14 assists (29 pts) in 16 games in the playoffs with his team.

Celebrity to have lunch with? Dwayne Johnson

Favourite Quote: “My best skill was that I was coachable. I was a sponge and aggressive to learn.” – Michael Jordan

Sirman is a 5-foot-10, 173 pound left-shot defenceman who will fit in well with the 67’s young defensive core.  Sirman collected a goal and 14 assists in 32 games this past season with the Toronto Jr Canadiens, before notching down 2 goals and 7 assists for 9 points in 11 playoff games.

Player you model your game after: Morgan Rielly

Do you have any pre-game rituals? Tape my stick, chew bubble gum.

With their fourth round selection, the 67’s drafted six-foot, 150 pound left handed defenceman Matthew Mayich from the Hamilton Huskies, who collected 7 goals and 19 assists (26 pts) in 33 games in the regular season, before putting up one goal and 7 assists for 8 points in 15 playoff games.

Player you model your game after: Thomas Chabot

Favourite Movie to Watch on the Road: Miracle on Ice

Thing You Know About Ottawa: Great city, the organization is very well respected, Adam Varga and Kevin Bahl (friends of mine)both have amazing things to say about Ottawa.

Henry was a standout this past season for the Rochester Selects with 51 points (20G, 31A) in 55 games.  The 5-foot-11, 181 pound Auburn NY native is a defenceman who could eventually become a great addition to the 67’s blueline.

Tell us how you found out about being drafted by the Ottawa 67’s in the OHL Draft? I got a call from Mr.James Boyd!

Hobbies outside of hockey: Going to the lake, boating, backyard games (Spikeball), hanging with friends and family, lacrosse.

Favourite Quote or Saying: “Champions aren’t made in the gyms. Champions are made from something they have deep inside them-a desire, a dream, a vision”–Muhammad Ali

During the regular season with the Waterloo Wolves, Collin maintained a goals against average of 1.67 plus two shutouts in 18 season games, before posting a 1.36 GAA in 14 playoff games and an impressive 5 shutouts in the postseason.

Tell us how you found out about being drafted by the Ottawa 67’s in the OHL Draft? I was watching the draft on my TV while on FaceTime with my goalie coach.

Favourite Quote or Saying: “You don’t have to be crazy to be a goalie, but it helps!” – Bernie Parent

The 67’s went local with their 9th round pick, selecting HEO Ottawa Senators MAAA forward Will Gerrior. The small, feisty forward posted 44 points (29G, 15A) in 45 games this past season.

Do you have any pre-game superstitions? The only superstition I have is to tie my right skate before my left skate.

In the 10th round, Ottawa selected out of the prestigious Detroit Little Ceasar’s program goaltender Cameron Korpi.  Standing at 6-foot-1, Korpi had a GAA of 1.52 in 7 games this past season.

Favourite ‘playing’ hockey memory: Winning back to back OMHA championships.

Another local pick for Ottawa in Arnprior native Ryland Landon.  The six-foot-one blueliner had 14 points (4G, 10A) in 44 games this past season with the Pembroke Lumber Kings.

What age did you start playing hockey? 5

Do you have any pre-game superstitions? Eat 4 hours before the game, and rolling for 15minutes when I get to the rink.

The second defenceman from the Rochester Selects to be picked by Ottawa in this draft, Powell had a good year with 48 points (17G, 31A) in 63 games this past season.