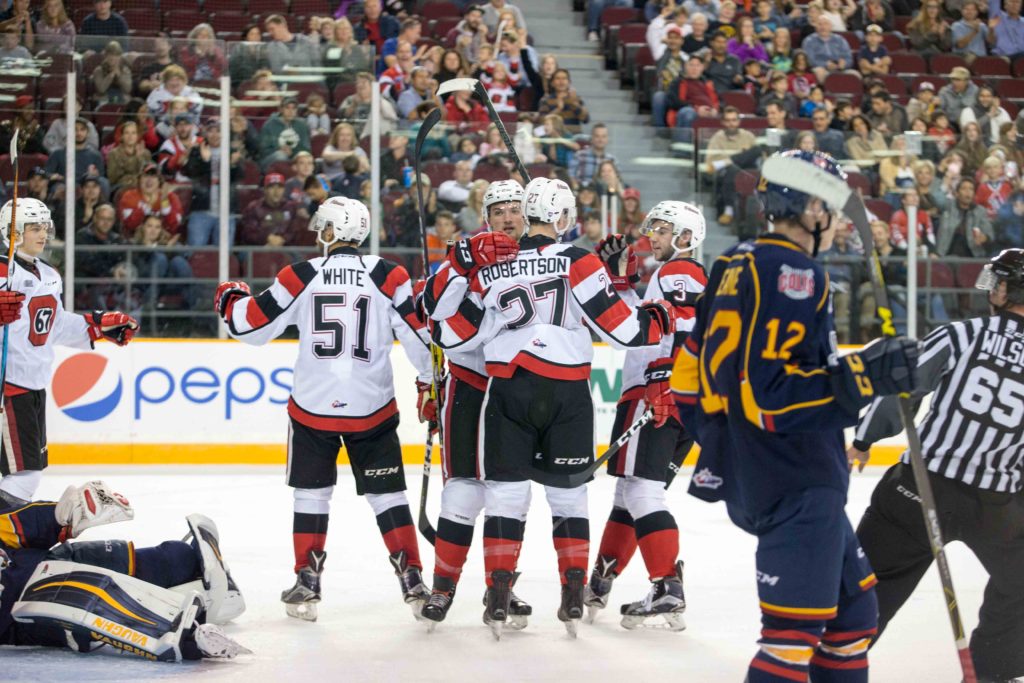 OTTAWA – Chase Campbell had two goals and Drake Rymsha notched a late goal to pull the 67’s within one, but the comeback fell short for Ottawa falling 7-5 to the Barrie Colts in a high-scoring affair in the home opener at the Arena at TD Place.

The loss was Ottawa’s first of the season, and drops their overall record to 1-1.

“The boys thought they were a little better than they are, and it showed in today’s game,” head coach and GM Jeff Brown said.

Brown mentioned the youth on the 67’s, specifically on the back end. “It’s tough sometimes. Even our older guys struggled today.”

After Ottawa took an early lead on the shot clock, the Colts would be the first ones to strike on the scoreboard. Kyle Heitzner deposited a quick wrist shot behind Leo Lazarev after a tic-tac-toe passing play.

Kody Clark would have an answer for the 67’s five minutes later. He scored his second goal of the season at 7:41 of the first on a deflection in front of the net to even the score at one.

Both teams came flying out in the second period, trading goals in the first five minutes to make the score 2-2. Barrie would open up a lead, however, with Matt Brassard and Kirill Nizhnikov notching two goals in three minutes.

Despite the 4-2 Colts lead, Ottawa didn’t let up. Local product Ben Fanjoy cut the lead to one, crashing the net and sliding one past David Ovsjannikov to make the score 4-3.

Barrie came out flying in the third, this time scoring within the first minute. 28 seconds in, Cordell James tipped in a wrist shot from the line for the Colts’ fifth goal.

They would add another goal, before Ottawa began a comeback. Campbell and Drake Rymsha added two unassisted goals.

The 67’s then pulled their goalie, but Anthony Stefano beat Noel Hoefenmeyer in a foot race, and backhanded it into the empty net. That sealed a 7-5 win for the Colts.

Campbell led the way offensively for the 67’s. He said he was happy to get a few goals, but ultimately was disappointed with the result.

“Two goals are always nice to get, especially at the home opener,” Campbell said after the game. “It’s just too bad we lost at home in front of our fans today.”

Next up for Ottawa, a gruelling road trip beginning Friday night in Sarnia with stops in Saginaw (Saturday) and Flint (Sunday).

The 67’s return home to The Arena at TD Place on Thursday, October 6 to face the Kingston Frontenacs at 7 p.m. followed by a Saturday afternoon contest on October 8 against Saginaw at 2 p.m.