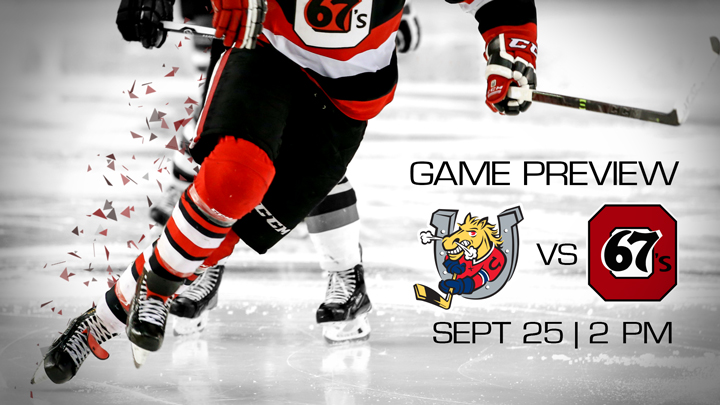 After opening their season Thursday night in Peterborough with an impressive 5-3 win, the Ottawa 67’s quickly shift their focus to Sunday afternoon’s much anticipated home opener against the Barrie Colts at The Arena at TD Place.

On the ice, 67’s will be looking to carry the momentum and confidence built in the 5-3 road win highlighted by solid goaltending from Leo Lazarev and contributions from players both young and old.

Head coach and GM Jeff Brown hopes that his team will feed off of the home crowd’s energy and the atmosphere at TD Place to display another strong performance.

“A home opener is always exciting for the guys,” said Brown. “It’s great to be back home and always nice to play in front of our home town fans. I know the guys are looking forward to it and are eager to open up the season at home.”

“That game has been circled on my schedule since the end of the season last year,” said Keating.” I’m really excited and so are the rest of the guys, especially that some of them will be playing in their first home opener so we’re really looking forward to it.”

Last year the 67’s and the Barrie Colts split their four-game season series with two wins apiece and both teams picking up a home and a road win. Just like every game last year against the Colts, Brown expects another tough challenge on Sunday.

“Barrie has one of the best coaches in the league in Dale Hawerchuk,” said Brown. “Their team is always skilled and play hard. So we will have to withstand the speed and our guys need to understand that they have a back-side pressure and make sure we take care of our own end against a team like that.”

“We should get our opportunities offensively as long as we take care of our defensive zone,” added Brown.

After Sunday’s home opener the 67’s will leave Ottawa for a grueling road trip which will see them play three games in three nights, starting Friday September 30 in Sarnia against the Sting.

Tickets are available by clicking here, calling 613.232.6767 X1, or in person at The Box Office at TD Place. All minor hockey players part of the 67’s Prospect Program presented by Enercare get in for FREE.