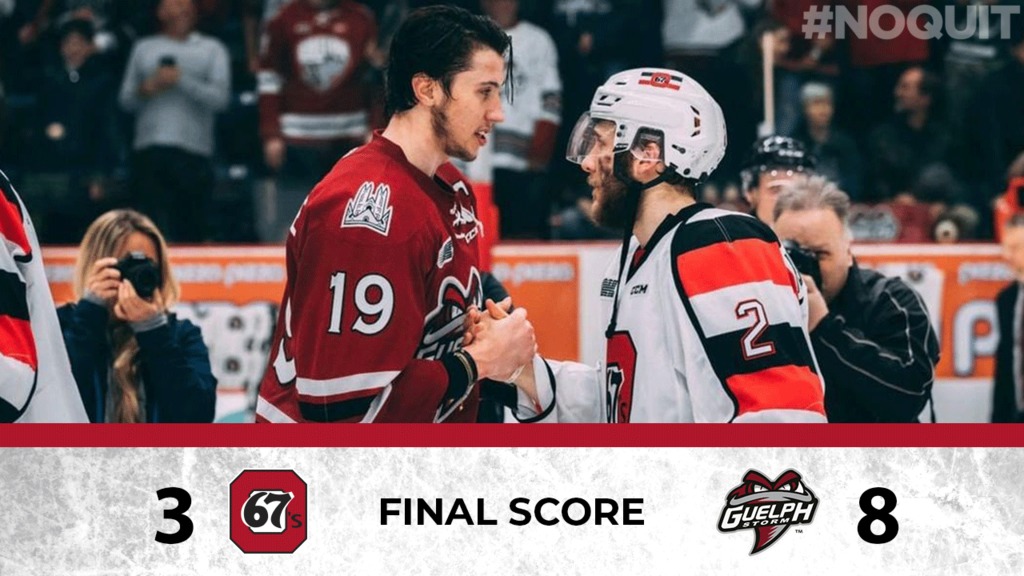 The magic that pushed the Ottawa 67’s to an Eastern Conference title and franchise record 50 regular season wins ran out Sunday afternoon in an 8-3 loss to the Guelph Storm.

The Game 6 loss on the road gives Guelph the 4-2 series victory and eliminates the 67’s, who finished the post-season with a record of 14-4.

The 67’s opened the scoring early in the game on a long shot from Noel Hoefenmayer in the neutral zone that eluded Popovich just before the three-minute mark. Kody Clark scored a little more than five minutes later with time about to expire on an Ottawa powerplay he fired home the rebound off a Kevin Bahl shot.

The Storm cut the lead in the first minute of the second period while on a powerplay that carried over from the opening frame as Dmitri Samorukov fired home a point shot. Captain Isaac Ratcliffe tied the game at the 7:46 mark of the second.

The Storm would add quick goals from Ratcliffe, with his second, as well as Cedric Ralph and Nick Suzuki to take a 5-2 lead. Sasha Chemlevski cut into that lead with a powerplay goal with the 67’s enjoying a two-man advantage to send the game to the third period with Guelph up 5-3.

The Storm added goals in the third from Samorukov, Domenico Commisso and Keegan Stevenson.

Cedrick Andree had a strong outing with 31 safes, while Anthony Popovitch made 23 saves for the win.

Information on the 67’s post-season media availability will be announced soon.

What they’re saying
Andre Tourigny, Head Coach
“I’m really proud of our effort. Our effort was there, our structure was there. Two really good teams and the margin between both teams was really tight, three games by one goal. It was tighter than the score indicates. One thing I know is we had a really special group of people. We’ll lose a lot of good guys and they will be missed and they will never be forgotten in Ottawa.”