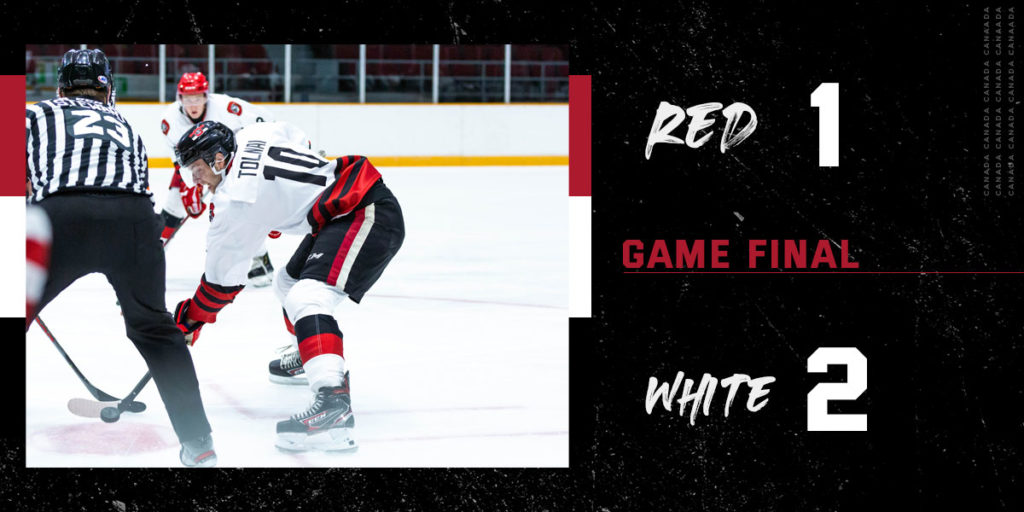 With the score tied late in a tightly-contested Ottawa 67’s intrasquad finale, a late goal by Bradley Horner proved to be the difference.

There was just over a minute and a half left on the clock when 67’s White forward Brenden Sirizzotti received a pass from Cam Tolnai, and fired a quick cross-ice feed to the defenceman Horner, streaking in from the blue line. Horner rifled a shot high glove side, and put his team up 2-1 over 67’s Red in the dying moments, with the marker that proved to be the gamewinner.

Goaltender Max Donoso wrapped up an excellent weekend with another lights-out performance, including a huge save in the final seconds to preserve the win. His 67’s Red counterparts, Collin MacKenzie and Will Cranley, were equally stout, ensuring that the game was tightly-contested for every moment.

It was 67’s Red who got on the board first, when Luca Pinelli crossed the blue line, and made a gorgeous no-look feed to defenceman Anthony Cosantini, who danced around the defender, and flicked a quick wrister up high to open the scoring. It was the type of dazzling play we’ve come to expect from this training camp, and befitting of such a competitive weekend.

In response, Donoso made a series of saves with 67’s Red looming on the lip of the crease. His compatriots upped the physicality, with Aidan Puley throwing a huge body check in the attacking zone.

Not to be outdone, MacKenzie preserved his team’s narrow lead with some critical saves of his own, and when 67’s White did break through, the goaltender could not be faulted whatsoever. It was a tic-tac-toe passing play from Tolnai, to Puley, to Jack Matier crashing the goal that beat MacKenzie for the first time in these scrimmages, and tied the game at one apiece, heading into the midway break.

Cranley entered the 67’s Red crease to begin the final frame, for the sake of rotation. He hardly looked like a goalie coming in cold, being called upon early, and answering the bell with remarkable save after remarkable save.

The goaltending battle wore on, though, with Donoso refusing to give an inch at the other end of the ice. When a puck did squeak through, defenceman Gavin Ewles made a sensational play, pulling it off the goal line at the last second. Cranley again responded in kind, holding the post on a mad scramble to keep it a 1-1 game.

As the final minutes wore down, it was Sirizzotti finding Horner for the stunning go-ahead goal. 67’s Red would pull Cranley for the extra attacker, but a final stop by Donoso at the horn sealed the win for his team.

Tonight’s thrilling affair marks the end of the 67’s intrasquad training camp games, as the team now looks to the preseason, beginning on Monday, September 6. The Barber Poles are in Peterborough to take on the Petes for a 2pm EDT Labour Day puckdrop.