Keating and Chmelevski on target again in preseason action 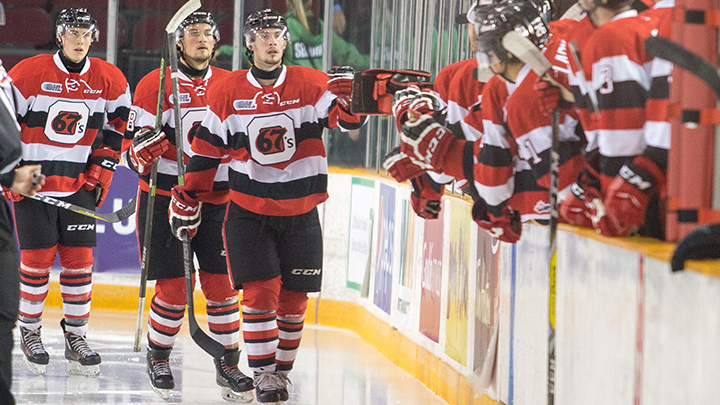 OTTAWA, ON – Ottawa 67’s forwards Austen Keating and Sasha Chmelevski both found the back of the net Sunday afternoon in preseason action at The Arena at TD Place. Ottawa and Kingston met for the second time in three days with the Fronts coming away with the 4-3 decision, despite the 67’s outshooting the visitors 26-13 in the final two periods.

Goaltender Leo Lazarev was on his game in his first star of the preseason turning aside 14 of 15 first period shots as the 67’s trailed 1-0 after the opening frame.

Austen Keating scored his fourth of the preseason after netting a hat-trick Friday night in Kingston to pull the game even at 1-1. The Fronts regained the lead just over a minute later, but Sasha Chmelevski pulled Ottawa back level with his second in as many games. Kingston would score late to carry a 3-2 lead into the third period.

Drake Rymsha scored just over two minutes into the final period, but Kingston again answered regaining the lead less than two minutes later. Mario Peccia managed to turn aside the rest of the 67’s chances throughout the period including a late scramble in front of goal in the final second.

Next up for the 67’s is a home-and-home series with the Gatineau Olympiques starting Friday night in Gatineau. The cross-river rivals will meet again on Sunday (September 11) at The Arena at TD Place at 2:00 p.m.

Tickets for Ottawa’s preseason games are priced perfectly for families, with adult tickets at $10 and kids tickets for only $5. Score your seats for Sunday’s game by clicking here, calling 613-232-6767 x1, or in person at the box office at TD Place.