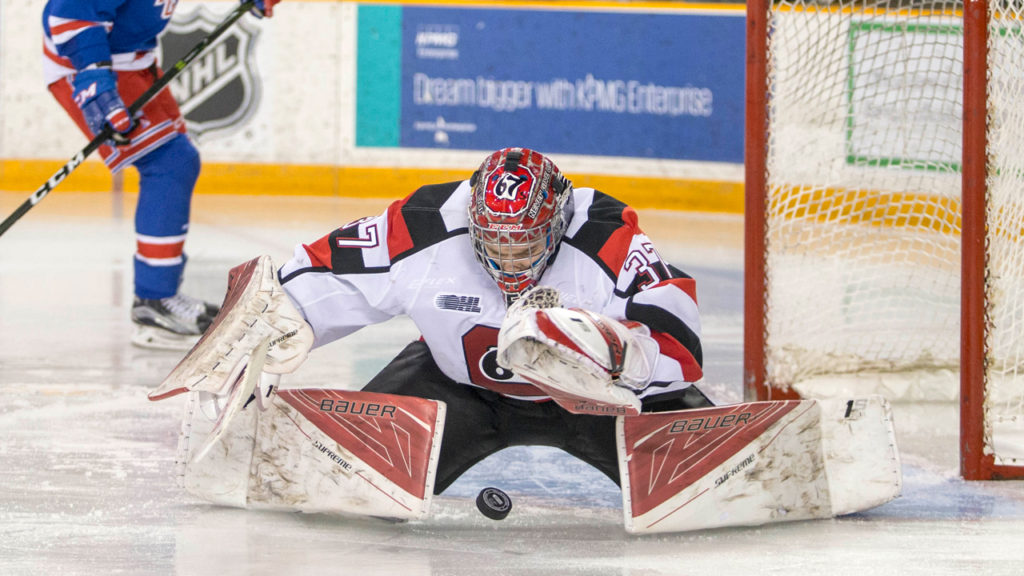 For the second straight game, the 67’s picked up one point in a tight overtime game. The barberpoles dropped a hard-fought affair, 5-4 to the Kitchener Rangers on an Adam Mascherin winner Saturday afternoon.
The game saw a special group visit The Arena at TD Place; the CFL champion Ottawa REDBLACKS stopped by with the Grey Cup. The thrilling performance of the REDBLACKS wore off on the 67’s, who outshot the Rangers 28-24 in the losing effort.

Despite the loss, associate coach Mike Eastwood was impressed with his team’s resolve.

“I thought we were pretty good for 50 of the 60 minutes,” Eastwood said. “Unfortunately that wasn’t good enough today. But we did a lot of good things. We’re building.”

Eastwood liked the look of Ottawa’s power play, which went two-for-four on the afternoon. He called it “very effective” and was happy to see improvement in that department.

Ottawa opened the game with two quick goals. A shifty deke to the backhand from Patrick White fooled Kitchener starter Luke Opilka just a minute into the game.

Then Ottawa found the back of the net on the power play, after the Rangers were caught with too many players on the ice. Artur Tyanulin launched a wrist shot through a screen from the point. His 11th of the year made it 2-0.

However, Kitchener would battle back and take control of the play late in the period. Connor Bunnaman took a feed from Jeremy Bracco to cut the lead in half at 2-1, then Mascherin tied the game on an own goal by the 67’s. Kitchener would take the lead before the end of the frame.

Ottawa came out with a new attitude in the second. Drake Rymsha led his team back to an advantage, scoring two goals in the period. He began by forcing a turnover in the attacking zone, and firing a low wrister past Opilka.

Then, he went hard to the net moments later and cleaned up the garbage on Jared Steege’s shot. That gave Ottawa their second lead of the game at 4-3.

Sixty minutes wouldn’t be enough to decide this game, as the teams went back and forth in a speedy third but couldn’t light the lamp.

In overtime, it was the Rangers that sealed the deal. Mascherin banked in the game-winning goal off a skate in front of the net, ending the game.

Ottawa returns to action Sunday afternoon, taking the ice against the Mississauga Steelheads at The Arena at TD Place, with a 2 p.m. puck drop.