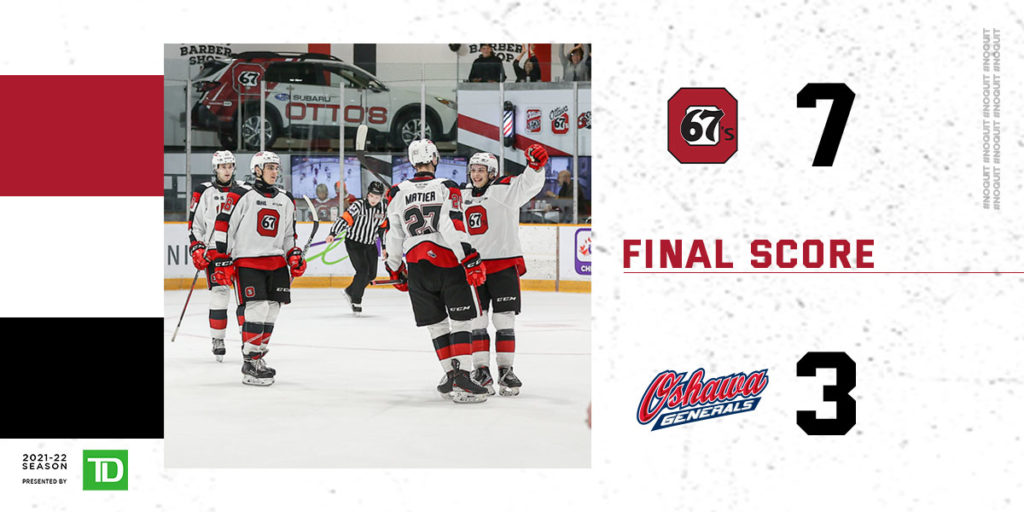 It’s likely that no one in Ottawa had a better Thanksgiving Monday than 67’s defenceman Jack Matier.\

With the news breaking mid-game that the 18 year-old had signed his entry-level contract with the NHL’s Nashville Predators, and his family in attendance, Matier put on a show inside The Arena at TD Place. He scored two goals — including the first of his OHL career — and added three assists, as the 67’s rolled to a 7-3 win over the Oshawa Generals.

“Obviously it’s a dream come true. Every kid wants to play in the NHL, and this is a stepping stone towards that,” said Matier, “But also, I was able to [contribute to today’s win], so I’m thankful for that.”

The Barber Poles were boosted by two more goals from Jack Beck, as well as first OHL goals for Vinzenz Rohrer, and Anthony Costantini. Vsevolod Gaidamak chipped in an insurance marker in the third period.

It was also the first career OHL start for 16 year-old Collin MacKenzie, who was stellar in the Ottawa crease. MacKenzie made 26 saves on 29 Generals chances, including a series of spectacular stops early in the game.

“I thought [Matier], every time he was on the ice, he settled it down, and our goalie was real good,” head coach Dave Cameron added, “Especially in that first period, we only gave up like six shots, but they were Grade-A chances, and he allowed us to get our legs underneath us a bit.”

For the second day in a row, it was a quick start for the 67’s. Just before the midway point of the frame, with the Barber Poles on the powerplay, a Matier point shot created a rebound for Beck, who made no mistake to open the scoring.

Despite a strong first period for Ottawa, it would be the Generals that skated into the second with the lead, on the back of two late goals. Callum Ritchie’s third of the year on a powerplay of their own tied it with less than two minutes to go in the frame, and Luke Torrance scored his first OHL goal with a minute remaining, giving Oshawa a 2-1 lead after 20 mins.

The late faltering, however, was not indicative of how the rest of the game would go for the 67’s.

8:10 into the second, and just minutes after the Predators announced the signing of his entry-level deal, Matier took a backhand feed from Thomas Johnston, and rifled his first OHL goal past Zachary Paputsakis to tie the game.

The 67’s continued to pour it on, as just under four minutes later, Will Gerrior forced a turnover in the Oshawa zone with a thunderous check, and the puck found Rohrer at the top of the circle. The 2021 Austrian import let go a wrist shot that went top shelf, giving Rohrer his own first OHL goal, and the Barber Poles a 3-2 lead.

Matier continued his banner evening a couple minutes later, throwing the puck to the front of the Oshawa net, where it bounced off the skate of Beck for his second of the game, and extended the Ottawa lead to 4-2.

The Ottawa onslaught continued late into the period, with another first OHL goal on the powerplay. This time, it was Costantini walking to the middle of the blue line, and uncorking a shot that found its way past Paputsakis, sending the 67’s to the third with a 5-2 lead.

Gaidamak heard his name called 7:13 into the third, when Adam Varga sprung him on a breakaway, and the Russian import blasted a backhand shot to the back of the net for his second of the year.

Fittingly, it was Matier that capped off Ottawa’s scoring day with his second goal, and fifth point. Beck slid the hulking defender a cross-ice feed, and Matier’s rocket of a one-timer gave the 67’s their seventh goal of the day.

The Generals got a late tally from Ryan Stepien, but it was small comfort, with the Barber Poles cruising to a 7-3 victory.

Up Next: The 67’s continue their four-game home stand on Friday, at 7:00pm EDT, with another matchup against the Generals.