OHL ‘On the Run’ Player of the Week: Sasha Chmelevski 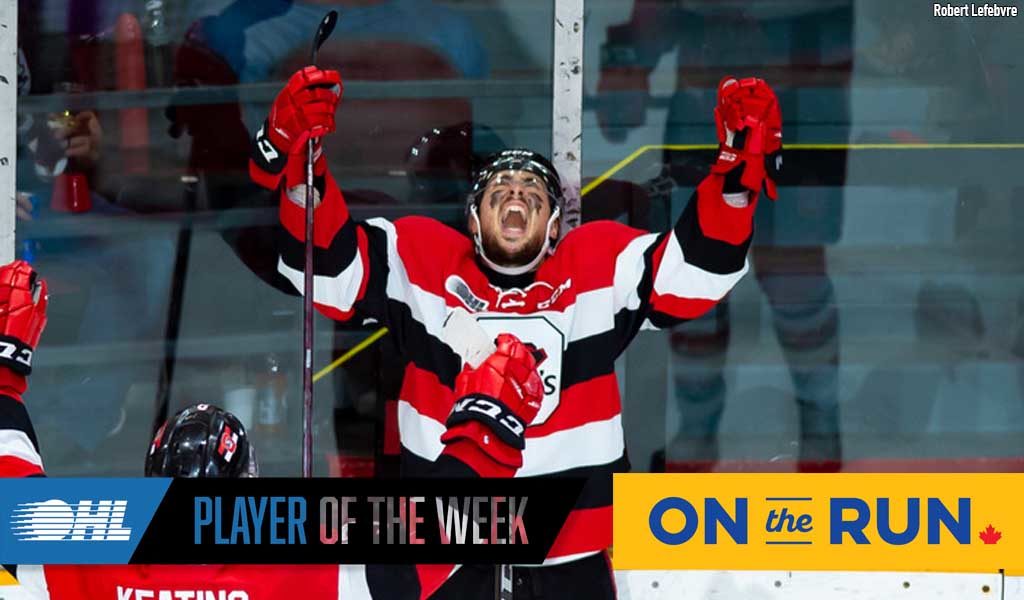 The Ontario Hockey League today announced that San Jose Sharks prospect Sasha Chmelevski of the Ottawa 67’s is the OHL ‘On the Run’ Player of the Week for the playoff week ending May 5 with six points in two games including three goals and three assists and a plus-minus rating of plus-3.

Chmelevski produced a pair of multi-point performances for the 67’s who opened the Rogers OHL Championship Series with two victories over the Guelph Storm on home ice to extend their perfect post-season to a record 14 straight wins.  He earned first star honours in Game 1 on Thursday night with two goals and two assists as part of the 7-2 win, then scored the game-winner and tallied an assist in Game 2 on Saturday as the 67’s held on for the 4-3 triumph.  The 14 straight wins beats the previous playoff record of 13 consecutive won by the 2016 London Knights that capped their Robertson Cup run, and the 1988 Windsor Spitfires who were a perfect 12-0 during their championship campaign.  The 67’s will look to continue their historic streak in Game 3 set for Monday night in Guelph.

8️⃣? of #OHLPlayoffs for #️⃣8️⃣

A 19-year-old from Northville, Michigan, Chmelevski is currently second in OHL playoff scoring with 27 points in just 14 games netting nine goals with 18 assists.  He’s spent almost his entire OHL tenure with the 67’s joining the club during his rookie season after being chosen by the Sarnia Sting in the first round of the 2015 OHL Priority Selection.  Over his 216 game career, Chmelevski has scored 102 goals and 111 assists for 213 points while being recognized for his achievements off the ice as the 2017 OHL and CHL Scholastic Player of the Year.  He would later be chosen by the Sharks in the sixth round of the 2017 NHL Draft and represent Team USA with silver at the 2019 IIHF World Junior Championship.

Watch video highlights of Chmelevski and the 67’s against the Storm in Game 1 and Game 2.

Also considered for the award this week was Lucas Chiodo who extended his own perfect playoff streak for the 67’s with points now in 14-straight games including a goal and three assists in the first two games of the Rogers OHL Championship Series.  On the Guelph Storm side, St. Louis Blues prospect Alexey Toropchenko has scored three goals in his last three games.  In goal, Cedrick Andree made his playoff debut in unexpected circumstances but posted the victory for the 67’s making 26 saves in relief of the injured Michael DiPietro finishing with a goals-against-average of 1.33 and save percentage of .963 in his 45 minutes of work.  He becomes the first goaltender to win a relief appearance during an OHL final while facing more than 20 shots in the last 20 years.