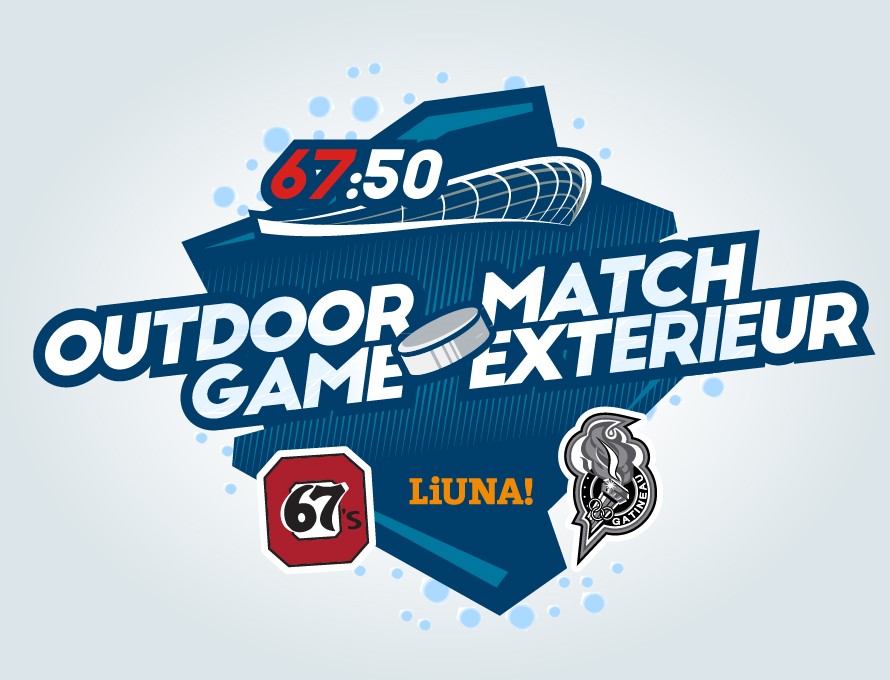 The Ottawa 67’s and the Canadian Hockey League today announced the 67’s will host an outdoor regular season game against the Gatineau Olympiques in The Stadium at TD Place on  December 17th at 3 p.m. Canadian Hockey League Vice President Gilles Courteau made the announcement in the stadium accompanied by representatives from the 67’s, the Olympiques and the City of Ottawa.

“This is a great day for hockey fans and families in the Ottawa/Gatineau region,” said Courteau, who also serves as Commissioner of the Quebec Major Junior Hockey League. “To experience an outdoor game in a major stadium at junior hockey prices is a once-in-a-lifetime opportunity and we are extremely grateful to the National Hockey League and the City of Ottawa for working with us to make it possible.” The stadium ice surface, rink boards and ancillary equipment required to stage a world-class outdoor game will be provided to the 67’s by the NHL, which is staging the Scotiabank NHL100 Classic outdoor game between the Montreal Canadiens and Ottawa Senators the day before the 67’s/Olympiques game.

ʺI’m proud that we have managed to attract to Lansdowne and support such great events to mark Canada’s 150th anniversary,” said Ottawa Mayor Jim Watson. “This family-friendly, affordable game between the Ottawa 67’s and les Olympiques de Gatineau is a wonderful addition to the NHL100 Classic Weekend and another feather in our Ottawa 2017 cap.ʺ

Tickets for the 67’s versus Olympiques outdoor game will be priced at $15 for general admission and $20 for reserved seating. Those prices include all taxes, surcharges and free transportation to the game on OC Transpo in Ottawa and STO in Gatineau.

“Free public transportation to and from the game and affordable ticket prices make it easy for families to attend,” said John Mathers, Vice President of Ticket Sales and Marketing for the 67’s parent company, OSEG. “That’s very important for both our franchises as we showcase the high-caliber of play that major junior hockey delivers in a major event atmosphere that’ll be remembered for a lifetime.”

Tickets for the Ottawa/Gatineau Outdoor Game will be available by clicking here on in person at the Box Office at TD Place and the Robert Guertin Arena Box Office.  67’s season ticket holders will be contacted over the next 24-hours to confirm their seats.

The outdoor game on December 17th will be the first of its kind played in Ontario. Two other outdoor games involving OHL teams were played in Detroit, Michigan in 2013 involving the Windsor Spitfires vs. Saginaw Spirit and the London Knights vs. the Plymouth Whalers, the second of which set a CHL attendance record of 26,384.