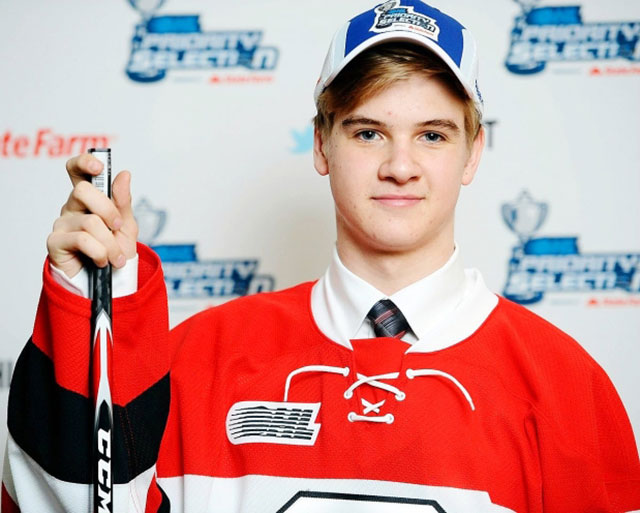 Travis Barron drew a bead on the Barberpole early last season but knew he’d have to work to make it a reality.

The rugged left wing whom the Ottawa 67’s ultimately added with their No. 3 overall choice in the OHL priority selection immediately felt comfortable with playing in the nation’s capital. Barron honed his game for the past three seasons with the Toronto Jr. Canadiens program, where 67’s grad Tyler Toffoli played minor hockey. The current Los Angeles Kings wing’s father, Rob Toffoli, scouted Barron all season, so there was an understanding. It just became a matter of Barron establishing himself as a top-5 pick.

“From Day 1, I said I want to be an Ottawa 67,” says Barron, a native of Caledon, Ont. “As the year went on, it looked like it was going to be tougher to be there because of where they were in the standings, which would make it tougher to be drafted there. But I worked hard and really, really wanted to be there and used that as motivation.

“My game kept improving as the year went on and I started thinking, ‘I can do this.’ I got really lucky but at the same time I feel like I deserved to go that high because of the hard work I put in.”

There is anticipation that Barron will have an immediate impact for the 67’s, who are headed into a pivotal season. The club was out of the playoffs for the past two seasons but boasts reigning OHL rookie of the year Travis Konecny and has a new coach and GM tandem with Jeff Brown and Pat Higgins as it moves back to the friendly confines of TD Place arena (AKA Ottawa Civic Centre).

“It’s a huge opportunity to me to play the best I can in order to make an impact in my first year,” Barron says. “That’s really what I want to focus on, to have an impact on the league and prove, on some level, that I can play with older guys. I don’t want to have too much expectations because I know it’s a tough league. That can bite me in the butt. I just have to do the best I can to prove myself.”

Time will tell where the 6-foot-1, 175-pound Barron fits into the grand scheme. Since hitting his growth spurt, he’s come to relish using his size to being hard to play against in tight spaces.

“I’m a big kid so I like being physical. I like playing hard and I like scoring goals. Putting in the tough play and scoring goals is what I take pride in. I love working down low, taking the puck to the net. Just be hard-nosed, keep your mouth shut and play the game.”

Barron got an early initiation into the step up from AAA midget to junior by joining the Aurora Tigers for the Ontario Junior Hockey League post-season. He was able to hang in, which he hopes bodes well for his move to major unior.

“The style of hockey, it’s all professional up there,” he says. “There’s no joking around. Everyone wants to be the best, compared to minor hockey when people are just playing the game because their parents are driving them to the rink. Everyone wants to go somewhere and make an impact every night.

“The experience, just playing with the bigger guys and the faster game, I think that’s going to pay off in the end. I think it’s an advantage to have those games under my belt compared to other guys who don’t know what it’s like to face that older competition.”

Barron also cannot wait to team up with his talented namesake, Konecny, who captained Canada’s gold-medal-winning team at last week’s Memorial of Ivan Hlinka under-18 tournament. The two Travises were each at Hockey Canada’s U17 and U18 camps in Calgary a few weeks ago, but their paths didn’t cross.

“Apparently he was looking for me,” Travis Barron says. “We haven’t met formally but he called me on draft day in April. It was just pure class. It really meant a lot to me for him to take time out of his day to talk to me.”

1. What is one aspect of your game that you need to show improvement in as this season unfolds?

“Probably my speed. The first three strides need to be a lot quicker and faster. I want to be an elite skater by probably the end of this year. I’m going to be working on that every chance I have. And I want to start shooting the puck more. It’s going to be harder to score so I might as well take my chances, but still be making the right play.”

“I kind of look up to the Milan Lucic type of player. Lucic can dominate a game, he intimidates players. He scores big goals. Aside from Lucic, I love the way [Chicago Blackhawks captain] Jonathan Toews plays. Great leader. I love being a leader. I look up to him every way. He keeps his mouth shut and works hard and that’s what I love about him.”

3. Apart from your parents (Brian and Kim), who is one person that you really credit for your success?

“Johnny Winstanley. He’s been my coach for eight years [three with Brampton Battalion and five with the Jr. Canadiens]. I’ve only had a handful of coaches and he’s been with me the whole way. He’s meant the world to me. I can’t thank him enough for what he’s done. He put up with me for eight years.

4. Who is one player you cannot wait to face in the OHL?

“Probably Taylor Raddysh [the Erie Otters’ first-rounder]. We’re best friends. We’ve grown up together and we’re always talking about it, the first time we play.

“Besides Taylor, probably his teammate Connor McDavid. Just to see how elite he is with my own eyes. See where I am in the hockey world. I’m just looking forward to seeing how he plays, what he does and taking some tips and tricks that I might try to put into my game.”

5. What is your favourite movie

“That’s a tough one. I’ll go with Step Brothers with Will Ferrell. It’s the best.”