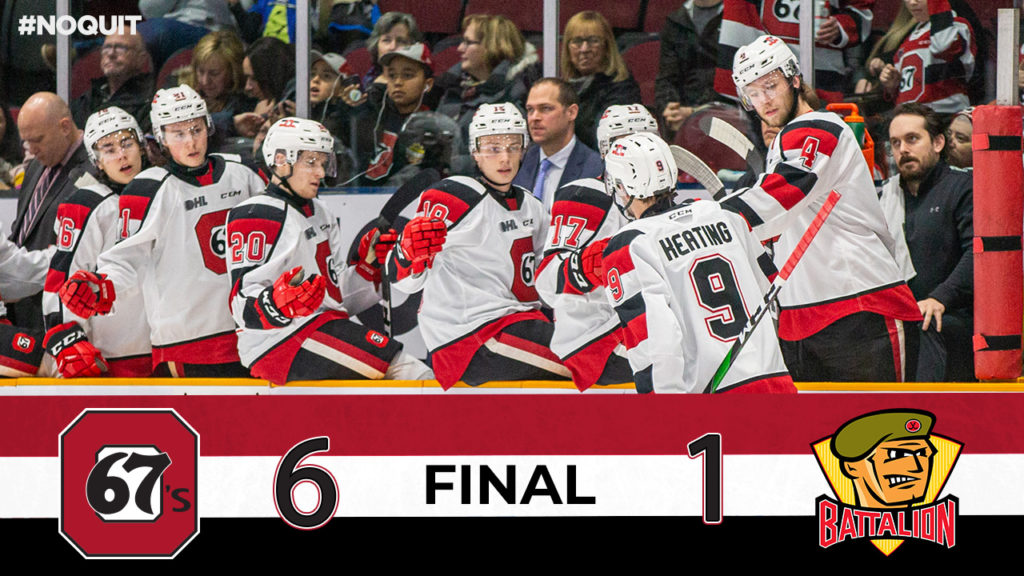 The Ottawa 67’s made it seven in a row on Sunday afternoon, with a big 6-1 win over the North Bay Battalion. The Barber Poles finished their weekend with a perfect record, thanks to Ottawa’s first line who combined for 9 points.

It was none other than Rossi who opened the score after 1:18 played in the first period. It all started from a good effort from Austen Keating who found Rossi’s tape in front of the net. Keating was again involved in the second goal when he scored his 14th goal of the season after redirecting Kevin Bahl’s shot. After 20 minutes of play, the Barber Poles headed to the locker room with a two-goal lead.

Ottawa started the second period in full force, putting a lot of pressure on North Bay. Rossi scored his second of the game early in the period when he found himself alone in front of Vrbetic. The Battalion came back in the game, thanks to Mitchell Russell who scored at the 12th minute of play in the second period, reducing Ottawa’s lead to two goals. Ottawa’s goalie, William Cranley, was able to keep his team in the lead with 17 saves in the first 40 minutes.

The 67’s came out flying in the third period and never looked back. Yanic Crete, Joseph Garreffa and Alec Belanger, all joined the festivities by finding the back of the net in the third period for the home team. The Barber Poles recorder 30 shots on target this afternoon, while William Cranley faced 22 shots in his seventh win of the season.

The Barber Poles will look to make it eight straight when they take on the Gatineau Olympiques in the first game of the Battle of the Ottawa River on Friday, December 6th, at the Robert Guertin Centre at 7:00pm.

“This was was a bit of a trap game, in the sense that after playing Oshawa, it was an emotional game for us.  I think today, we played well enough to win.  We have talented players that made plays.  These are tough games to play.  You can say whatever you want, to play with the energy and urgency you need to, you can’t fake that, so I’m happy with the way we played today.”

On his production and development this year… “I never thought about points ahead of this season, I only thought about improving and getting better every day.  I want to improve everywhere in all situations, neutral zone and defensive zone.”

“We feel really good in our locker room, we have a lot of confidence.  When it comes to with my line mates, I think we have really good chemistry, we all have good hockey IQ and playmaking ability.”

With two goals and two assists, this made it Marco Rossi’s 13th multi-point game of the season, and his sixth in a row.

The Barber Poles outshot the visitors significantly in this one, with 30 shots against 22.