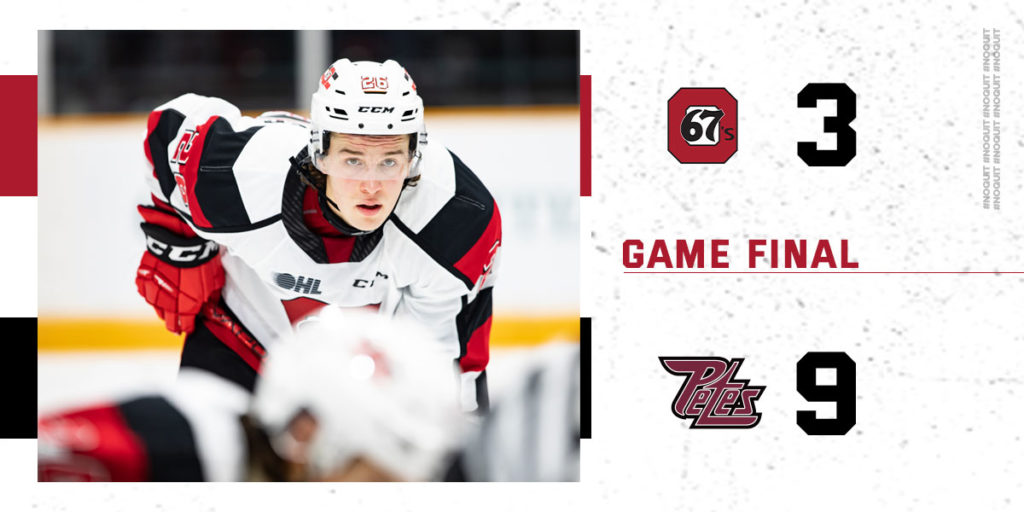 The Ottawa 67’s weren’t able to cap off their weekend with a win, falling by a final score of 9-3 to the Peterborough Petes on home ice.

Peterborough struck early, with two goals in the first 3:17 from Emmett Sproule and Samuel Mayer, but Brady Stonehouse answered for the 67’s with a beautiful end-to-end rush for his third of the season.

Tucker Robertson tallied another for the Petes before the end of the first, and Keegan McMullen was credited for one off of an Ottawa defender’s skate early in the second, making it 4-1.

Brenden Sirizzotti scored his sixth of the year by deflecting a Thomas Sirman shot, cutting the deficit to 4-2, but the Petes would score four unanswered up to the midway point of the third, from Joe Carroll, Justin DeZoete, Nick Lardis, and J.R. Avon.

Jack Matier got one back for the Barber Poles on the powerplay, bringing the score to 8-3, but Lardis second of the day would be the final entry on this night.