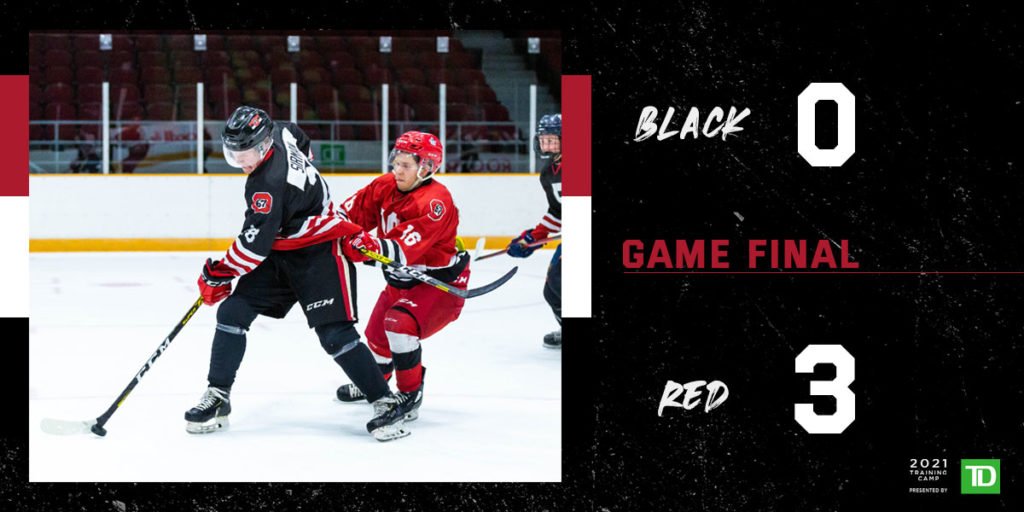 In the first 50-minute intrasquad game of the 2021 Ottawa 67’s training camp, it was Team Red earning a hard-fought win over Team Black.

Goaltender Collin MacKenzie stopped every shot he faced, while Calgary Flames draft pick Jack Beck, Giovanni Morneau, and Brenden Sirizzotti tallied goals to lift their squad to a 3-0 victory. Barber Poles 2021 first-round pick Luca Pinelli stood out with two assists, and Morneau added one of his own for a two-point day.

“I think we played together really well,” said MacKenzie, “The ‘D’ worked really well in front of me, and the forwards got us shots on net, so it was overall a good game for everybody.”

The 3-0 score belies how competitive the game truly was. It was a back-and-forth affair from the start, with both teams looking to generate chances against skilled defenders. Nashville Predators prospect Jack Matier, and Derek Smyth locked things down for Team Red, while Bradley Horner also contributed with a few crushing checks. For Team Black, it was veterans in Alec Belanger and Teddy Sawyer, as well as newcomers Liam McDonald, and Ryan Cartwright making life difficult for their opponents.

Both netminders also stood tall, what with MacKenzie’s shutout performance, and Team Black goaltender Mathis Mainville coming up with some huge saves.

“It’s been fun. I’m getting to know all the guys, especially the players that are already signed on the team. They’ve been treating me really well here and it’s been exciting,” MacKenzie said “It’s a pretty fast game, and it’s been awhile since I played that pace of game, but I think after the first period I settled in quite a bit, and it was fun to be out there.”

The Red team finally opened the scoring near the midway point of the first frame. Pinelli entered the Team Black zone, and slid a beautiful cross-crease pass to Beck, whose laser of a shot from the top of the circle broke the deadlock.

It was a similar play just as time expired in the first half, but this time, Pinelli rushed up the ice and fed Morneau, who found the twine with a slot shot of his own to make it a 2-0 game.

The final frame saw more competitive hockey from both sides. Team Black were relentless on the forecheck, generating scoring chances on hard-work plays from Brady Stonehouse, 2021 first-rounder Chris Barlas, and Connor MacPherson, who stood out on account of his physicality.

Early into the second half, it was Morneau finding Sirizzotti, who opened his account with a slick shot, and extended the Team Red lead to 3-0, where it would ultimately stay for the remainder of the contest.

“I thought we started a little slow at first, and then once we started to pick it up, we really started to get moving,” added Team Red forward Ryan Smith, “Getting pucks in deep, chasing after pucks, and then you start connecting with your linemates a little more, talking on the bench and stuff. So after that started to happen, then we started to put some goals in.”

A skilled two-way forward, Smith made some big plays defensively for his team, backchecking hard to break up scoring chances.

“I can play both ends. I can control the puck in the offensive zone, and still get back and play defensively, and continue to contribute for my teammates.”

Team Black will have a quick turnaround, as they take on Team White at 3pm EDT, while Team Red will be back in action against Team White tomorrow morning at 10am EDT, before the final Ottawa 67’s intrasquad game tomorrow at 5pm EDT. 67’s fans can watch all the action via the team Twitch channel.