Polish and perseverance: Cameron Tolnai suits up in 200th game with 67’s 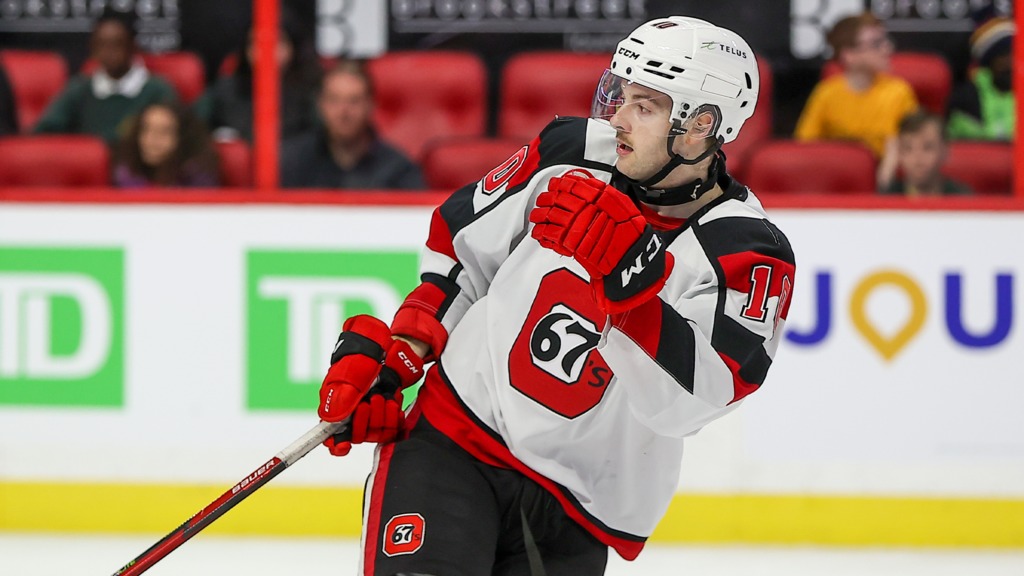 Cameron Tolnai knows that he should have played plenty more games in an Ottawa 67’s uniform.

With the 2019-20 season cut short, and the 2020-21 campaign lost entirely due to the COVID-19 pandemic, the 20-year-old Oakville, Ontario native is cognizant of the fact that he should have nearly 85 more games with the Barber Poles under his belt.

That doesn’t mean, however, that milestones accrued in his overage season mean any less.

When the 67’s take to the ice at the WFCU Centre on Thursday, in the season’s first tilt with the Windsor Spitfires, Tolnai will appear in his 200th Ontario Hockey League game, all of which have come with the 67’s. It’s a moment thats significance is not lost, on him.

Though the journey may seem as if it’s gone by quickly, Tolnai will have spent five years with the 67’s upon this season’s conclusion, and they certainly haven’t come without their up’s and down’s. Drafted sixth overall by Ottawa in 2018, Tolnai debuted that season, and had to carve out a role on a team that was already well-established. He appeared in 56 games, scoring three goals and 10 assists, for 13 points.

Tolnai also made four appearances during that year’s playoff run, in which the 67’s fell to the Guelph Storm in the OHL Final.

Though the lessons learned from his first season had him feeling more comfortable going into Year 2, Tolnai’s sophomore campaign wasn’t the one he had hoped for. An admittedly slow start, coupled with an injury, and then finally, the onset of the pandemic took a promising season, and playoff run away from Tolnai, and a stacked 67’s team that had ambitions of a Memorial Cup victory.

When OHL play was finally set to resume ahead of the 2021-22 season, plenty had changed around The Arena at TD Place. Gone were the likes of Marco Rossi, Jack Quinn, Noel Hoefenmayer, and so many others who had been the core of a high-powered Ottawa team. Faced with a much younger roster, Tolnai suddenly found himself looked upon as a leader, being one of the longest-tenured members of the team.

It’s a good thing, then, that he had learned from the best.

“For my first year, I would say Sasha Chmelevski [was a great leader]. He’s a guy who played in the World Juniors, was drafted to the NHL, and had kind of seen it all,” said Tolnai. “He’s someone who I’ve looked up to; not so much as a ‘rah rah guy’, but who led by example.”

Tolnai also pointed to Hoefenmayer as someone who displayed the work ethic that has become integral to the 67’s identity; being the first guy on the ice, or in the gym, and the last one to leave.

It wasn’t only new teammates that faced Tolnai in his third season, but a new head coach as well. With André Tourigny joining the NHL’s Arizona Coyotes, in stepped Dave Cameron, who needed no introduction as one of the most decorated coaches in the history of Canadian junior hockey.

In Tolnai, the 67’s new bench boss found someone who could be trusted, almost immediately.

While Cameron freely says that Tolnai is currently in the midst of his best year, with 30 points in 25 games, it is his effect on his teammates, that stands out the most.

“He’s a multiplier. He makes the guys he plays with much better. We’re lucky to have him.”

Age, and experience are certainly a factor in Tolnai’s success, but he also points to Cameron’s trust in him, and system that emphasizes sound defence, but encourages offensive creativity, for the increased production he’s enjoyed, this year.

The fact that this will be his final OHL season lingers in Tolnai’s mind, but more importantly, he knows the same could be true for numerous teammates, making this the potential “last ride” for a tight-knit group. To that end, Tolnai acknowledges that the idea of a deep playoff run is tantalizing, but that the team is staying focused on the task at hand.

“It’s just a lot of fun, at the end of the day. We’re all doing what we’re doing for the love of the game,” he said. “I think if you look too far ahead, you can skip some steps, and I think we’ve been great so far at just looking forward to the next game.”

He may not hit 270 regular season games, but there are still many yet for Tolnai to play, in Ottawa.