Preview: Back To Guelph For Season Opener 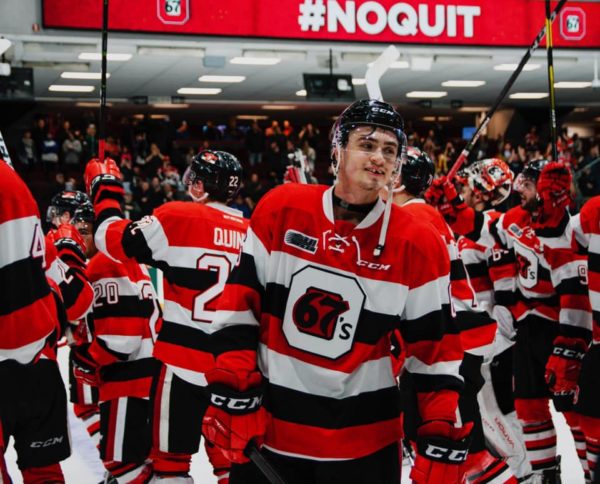 Once more unto the breach, dear friends, once more. The 2019/20 Ottawa 67’s #NoQuit campaign starts tonight.

Remember the Guelph Storm? We sure do. The OHL Championship Finals were an exiting 6 games, but that was sooooo last year. We live in the NOW. We live in the present. The Storm have a some returning players, which should make for an exciting tilt – as both teams would like to kick off the season in style.

Player To Watch For Guelph:

On Guelph keep your eye on Cam Hillis. This summer, he was named the 29th captain in Storm history. The C on his chest, plus his experience will be leaned on to get this team going. He’s a Canadian draft pick (66th overall in 2018) and has scored 81 points in 93 career games with the Guelph Storm.

Player To Watch For the Ottawa 67’s:

Marco Rossi finished his rookie season with 65 points in 53 games during the 67’s regular season and added another 22 points throughout the playoffs. Marco is heading into his sophomore season as a highly ranked NHL prospect and will play a vital role in Ottawa, not only returning to the post-season, but also making a deep run for the OHL Championship.

We’re hearing that Guelph will be raising the OHL Championship banner ahead of puck drop on Friday evening. We’re also hearing that the J.Ross Robertson Trophy will be making an appearance.

Meanwhile, back in Ottawa:

The Season Opener Viewing Party is at the Crust & Crate at Lansdowne on Friday night as the 67’s take on the Storm live from Guelph. Hangout and cheer with other fans as the team hits the road to open the new season! The game will be on the TVs, we’ll have trivia, prizes and other fun activities. Puck drop is at 7:30pm so make sure you’re a bit early so you can get a seat. MORE INFO

Then, it’s off to Owen Sound to face the Attack on Saturday Night!

#NoQuit is back in a big way.