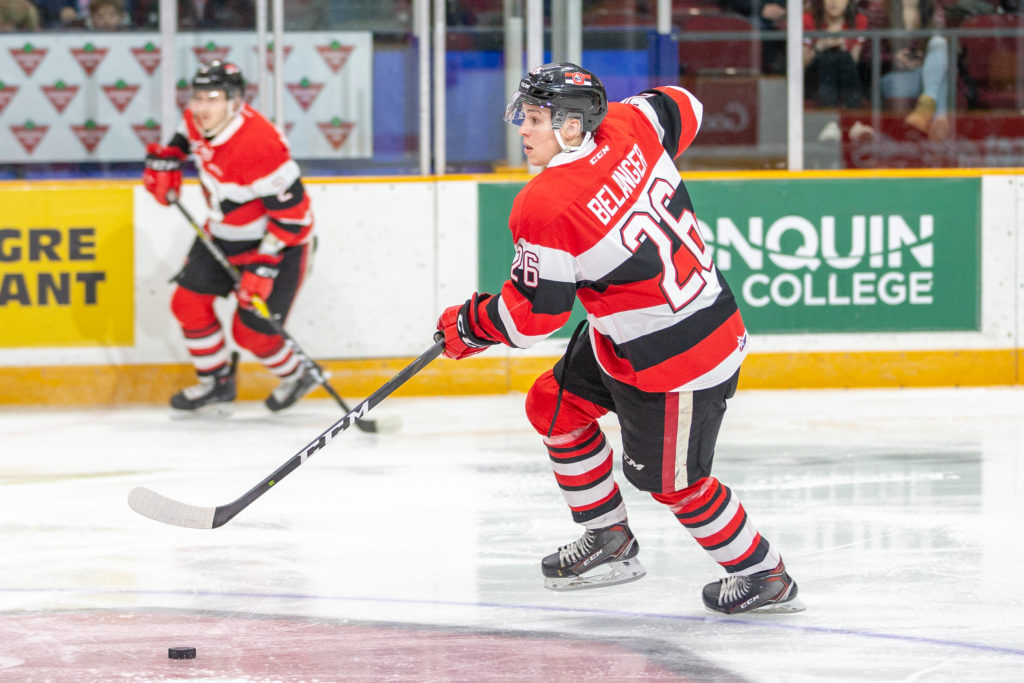 Heading into his second OHL season and his NHL Draft year, Alec Bélanger will be looking to be a key piece to the Ottawa 67’s defense corps in 2019-2020.  Bélanger progressed more and more as the season went on, earning the trust of the coaching staff and even appearing in a few games in the OHL Finals.

A smooth-skating defenceman, Belanger put up eight points in 27 games, playing as part of a stacked defensive corps.  After playing 14 games with the Ottawa Jr. Senators, putting up six points in the process, Belanger was permanently called up to the team full-time around January, and hasn’t looked back since.  Now heading into his sophomore season with the Barber Poles, fans can expect to see # 26 flying down the ice in The Arena at TD Place, snapping tape to tape passes to his teammates for a few years to come.

Q: Tell me what your summer has been like. I’m sure you took some time off after the season ended, what did you do during that time off?

A: I took about two or three weeks off, spent a lot of time with my family, you realize how much you miss them when you’re away for the whole season. I had a great billet family in Ottawa, but you miss home, so I’ve been spending a lot of time with them and with my buddies a little bit.  I took a little bit of time off, did a lot of swimming, been playing some golf and now I’m back to training, so life is good right now.

Q: What are some of the things you’ve done over the summer to get away from the game a little bit?

A: I can never really get away from being active and playing sports, so biggest thing is playing a lot of sports with my friends, I’ve been playing some basketball, some spikeball, a lot of golf.  It’s not only about being active but also spending time with good people, so it’s been a fun summer so far for me.

Q: Did you go on vacation anywhere?

A: I’ll be going to Quebec City, where I grew up, to see my family for about ten days at the end of July and make the most of the great summer weather we’ve been having at the cottage and see my grandparents for a bit.  I’ll be doing all of that fun cottage stuff, swimming, fishing, going to the beach.

Q: Talk to me about your rookie season in the OHL, how was that experience and what are some of the moments that stood out for you?

A: There were definitely some ups and down, but I wouldn’t have had it any other way.  Playing a little bit of Junior A with the Ottawa Jr. Senators was great for me and can’t thank enough my teammates and the staff over there, especially the captain Darcy Walsh, who showed me the ropes on how to be a junior player and how to conduct myself on and off the ice.  There were a lot of positives, scoring my first goal back in January was really cool after being called up full time, it was great to see the coaching staff show some confidence in me.  I think I was able to show what I can do and had more and more minutes the more the year went on.  Obviously, things didn’t end the way we wanted them to, but the way I see it, we learned a lot and it’ll make us better and we’ll for sure be a team to watch this season.

Q: Assisting on your first OHL goal was graduating forward Lucas Chiodo, who you saw play for a couple of years when you lived in Barrie, I’m sure that was special for you.

A: It was obviously special for that to be assisted by Chico (Chiodo), I knew a lot about him because of when I lived and Barrie and saw him a lot then, we’re good buddies now and we’ve been training together this summer, so that’s pretty cool, to see him have the opportunity he has to now go play in the Alps Hockey League, that’s pretty cool.  So to see him as a kid in Barrie, to getting an assist from him on my first goal and now he’s my buddy and training partner, I appreciate him a lot.

Q: You got to play a couple of games in the OHL Finals as a rookie, how was that experience for you?

A: Obviously, you never want to see a guy like Bahler (Kevin Bahl) go down to injury, especially on that stage. He’s a great player, but those things happen in sports and you’re going to want to step up whenever someone goes down.  I didn’t want to be Kevin Bahl, I wanted to be my own player but that was great experience for me and I grew from it, obviously it was a tough ending for us, but I know it made me a more confident player, and we’ll be back and hungrier next year, it was only the beginning for us.

A: I think it starts with our locker room and coaching staff, everybody had bought in, the guys were selfless and we were all brothers in there, we all understood our role and I think that’s what gave us our success.  We all battled for each other during games and against one another in practice.  When you practice as hard as you play, the game is easier.  I think the way we practiced played such a huge part in our success.  The way I look at it, it feels like everything was just meant to be.  From winning all of those consecutive games in the playoffs, to having a full house to play in front of, it was so awesome. It’s too bad we didn’t win but that was only the beginning and I think we showed that the 67’s organization is back to the winning culture it had a few years ago and we’re really excited about that.

Q: We saw Nikita and Graeme both get drafted last month by the New Jersey Devils, you are yourself heading into your own draft year, seeing those guys’ hard work pay off, how motivating is that to you?

A: Niki and Graeme are both great players and great people, which helps a lot, because teams not only look for good players, but for quality human beings like them.  Obviously it is motivating, but I’m not going in there thinking about my draft year at all. I’m going to go into this season focused on the Ottawa 67’s and having success with them and if I get my named called on draft day, that’s great.  I went into my OHL draft year with the same mentality, so it paid off and I’m going to live in the moment and keep focusing on the Ottawa 67’s.

A: I’m looking forward to this season big time!  When you look ahead, how can you not be with the group of guys we have? From what I can see, our management did a great job in the draft to bring us some young talent but if we look at the guys returning that we have, we’ll have one of the better defense group in the league, everyone is excited to see what Marco can do, and a lot of others, so I’m really looking forward to that and we’ll be going for another deep playoff run this year.

Q: How much are you looking forward to having a bigger role on this team and how are you embracing that?

A: I’m excited, I wouldn’t have wanted my first year to be any different, it was important for me to kind of ease into the league and now I’m ready, I feel ready mentally and physically to have a bigger role.  Coach showed more trust in me last year the more the year progressed and that made me more and more confident, so I’m definitely excited for that and looking forward to next season.

Q: Training-wise, what have you been up to this summer and what are some of the things you’ve been working on to improve?

A: One of the biggest things has been my speed and footwork.  It’s a game of speed right now so if you can’t keep up and have that extra step, you’re in trouble.  I think all around, it’s a little bit of everything, getting bigger, stronger and faster, as well as working on all of the little details that make you a better player.

Q: What are some of your personal goals for this upcoming 67’s season, what would you like to accomplish?

Q: There’s some food you can’t eat during the season that I’m sure you’ve been treating yourself to over the summer, what would be the cheat meal type of food you’ve had a lot of this summer? (Don’t worry, we won’t tell Younger)

A: Honestly, it’s probably my favorite food, ice cream.  I’ve probably been for ice cream every night since I’ve gotten back to Barrie, I’ve been to all the spots around town with my buddies, so that’s definitely been my go-to.