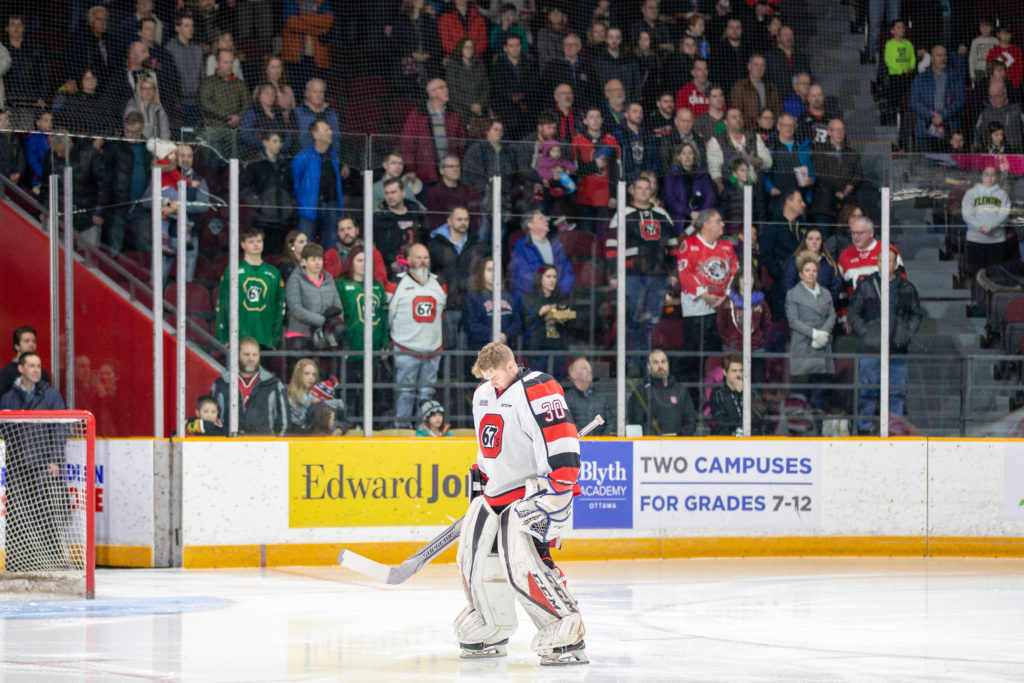 We got the chance to chat with Ottawa 67’s goaltender Cedrick Andree, who is coming off a tremendous 34-win season, including two shutouts and a 2.48 GAA.  The fan favourite goalie is fresh off participating in Carolina Hurricanes rookie camp and will be back with the Hurricanes for the rookie tournament. Andree will be sharing his net with Will Cranley this coming season, in what will be his second full year with the Barber Poles.  Known to stop pucks in the Arena at TD Place and all around the OHL, Andree’s personality and relationship with the fans has set him apart so far in his Major Junior career.

Q: Tell me what your summer has been like? I’m sure you took some time off after the season ended, what did you do during that time off?

A: During my time off I went to Mont Tremblant with Nikita (Okhotyuk) for a weekend after the season ended, went down there, relaxed a little bit and took some time off to myself and enjoyed the great weather we’ve been getting. I’m really pale and people keep telling me, so I’ve been trying to get a little bit of a tan. Still working on it, though.

Q: What are some of the other things you’ve done over the summer to get away from hockey a little bit?

A: I’ve also been playing a bit of beach volleyball…soccer used to be my sport during the offseason, but this summer I stayed away and moved into a more relaxing, fun sport you can play with your friends. It’s essentially turned into my new favorite summer sport.  I’ve also been to the beach a lot, which does make sense since I’ve been playing a lot of beach volleyball.

Q: You’re a local player, so what are some of your favorite things to do in Ottawa over the summer?

A: I like to go to Mooney’s Bay, it’s one of my favorite spots to go swimming, I also love just going to Lansdowne, It’s a nice spot to hang out and have a good time.  Another thing I love is to play spike ball, so whenever I get the opportunity I do that in whatever nice spots the city can offer.  I like to hang around the ByWard Market, Parliament Hill and all the other usual spots.  I’m a big animal guy, so I went to Parc Omega as well, it was a great time.

Q: Has the way last season ended for the team made you even hungrier to get back out there in 2019-2020?

A: I definitely think it did.  Not the result we wanted, you always want to win the championship.  I can’t really dwell on that too much right now, but looking at our roster, I believe we’re going to have an awesome team once again and we’re excited to go on another deep playoff run.  Our guys gained a lot of experience with that playoff run, including myself, and I think we’re a really hungry and motivated bunch coming into this season.

A: Obviously, you never realize how good of a season you’re having until it’s actually over, but after we lost, it was so disappointing because everyone wanted to win and it’s too bad things didn’t work out like we wanted to, but I think that it gave us great experience and it definitely made us hungry to go on and have another awesome season like last year. I think we proved that the Ottawa 67’s organization from top to bottom has a winning culture here and we want to keep that going with the group of guys we have.

Q: You went out to Carolina Hurricanes Dev Camp, what was that experience like for you?

A: It’s always been a dream of mine to go to an NHL camp, I think it’s every kid’s dream.  I learned a lot about the next level and what I need to do in order to get there.  Obviously my goal is to help the Ottawa 67’s win the most games possible this year, and I think that going to Hurricanes camp will help me do that.  Hockey’s a lot more fun when you win.  It also made me appreciate what we have here in Ottawa because if we compare the things we have access to here, to what some NHL teams have, it definitely makes you feel lucky and thankful towards our organization because we’re given an NHL-type environment to work in.

Q: Noel Hoefenmayer went to camp with you, how was it living that experience with him?

Q: You were mentioned on the Spittin Chiclets podcast by Darren Pang in an anecdote where Steve Yzerman called him to talk about a smallish goalie in Ottawa, did you hear about that?

A: Yeah, some people mentioned it and texted and called me when it came out, it was pretty cool. I listen to that podcast a lot so to hear my name on there was the coolest thing ever.  Especially hearing those good words from Darren Pang, who was one of the most famous goalies to come out of the 67’s organization, it’s not every day that you get those kind of compliments on that kind of platform so I’ll definitely take it!

A: I’ve been training with Sean Young a lot off the ice, it’s one of the things I’ve really focused on this summer.  I feel like I have too much of a toothpick body right now so we’ve been working on building some muscles.  I’ve also been working on the ice to get faster and more explosive and also been working on my angles and making myself bigger.

Q: Take me through a typical workout day or week in your summer, for the people wondering how much work you guys put in the summer.

A: My typical week starts out with a workout every morning with Sean Young at 9 o’clock in the morning, from Monday to Friday, and then 2 to 3 times a week I have a goalie session in the afternoon that lasts about an hour and twenty minutes.  I also skate every Sunday for some scrimmage type games.

Q: Have you binge watching anything or see any good movies over the summer?

A: Funny you ask me, I recently went to see Crawl at the movies, and it wasn’t very good, but one thing I’m super excited for is the new Lion King, which is coming out soon.  I also binge watched Suits, which is very good as well.

A: I feel like you can’t really cheat during the summer, but during that two week period I took off, I definitely had some poutine when I went to Mont Tremblant, and I also had a lot of ice cream.  Those are my go-to cheat meals.