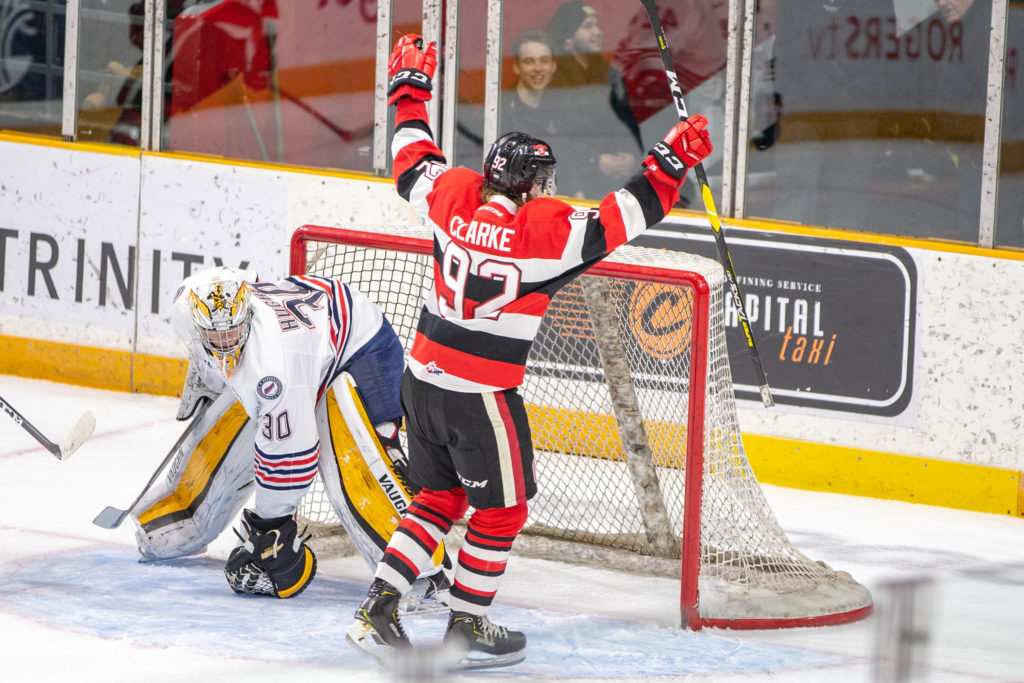 This week we catch up with 67’s forward and Ottawa native Graeme Clarke, who just returned home following the New Jersey Devils Development Camp this past week.  Clarke was drafted by the Devils in the third round, 80th overall back in June, joining two of his 67’s teammates – Mitch Hoelscher and Nikita Okhotyuk – in the Devils organization.  Coming off a 23-goal and 34-point campaign, Clarke will be looking to take on a bigger role with the Barber Poles this coming season.

Q: Tell me what your summer has been like? I’m sure you took some time off after the season ended…what did you do during that time off?

A: Well it was the longest season of my career, it was amazing but really draining on the body, so I took about two, two and a half weeks off and took some time off to myself, but then I had to train ahead of the NHL Combine, so I did that, and then a couple of weeks after that I had the NHL Draft in Vancouver, so it was all a pretty busy time. But I don’t like to take much time off anyways.  After the draft, I had my high school prom and then went right back to training ahead of Devils Development Camp, went there and had a great time.  After that, I headed back home in Ottawa to continue my summer training.

A: I like to golf, I like to do some boating, play some basketball in the yard with my brother, just playing other sports you usually don’t get to play much. Tennis, also. It’s good to play other sports in the summer because I like to stay active and it can help you build some other muscle groups you don’t usually work on.

Q: An amazing 2018-19 season didn’t quite end the way you wanted to… has that made you even hungrier ahead of next season?

A: I don’t think it really sunk in until maybe 2-3 weeks after the season had finished, it was a tough ending for us, obviously we would’ve liked to go all the way to the Memorial Cup, but there’s a lot of positives to take back from this season. Moving forward to this year, we have a great group of young players and veterans coming back that gained a lot of experience and that’ll help us this upcoming season, especially knowing what we’re getting ourselves into, so I think that another long playoff run is in the cards for us this upcoming year, for sure.

A: It was definitely an amazing season, everything was different from my rookie year.  We were going into every game expecting to win and we had a lot of confidence and trust in every guy.  It makes you appreciate a lot the graduating players, how good they were as players and people and how much they taught us.  We’ve seen the 67’s program trending upwards the past couple of years, and everyone from top to bottom starting from the staff and the players have played a huge role in that, and I think the 67’s have a great program that keeps growing and growing.

Q: You were just drafted by the New Jersey Devils last month, joining Nikita and Mitch over there. What has this whole draft experience been like?

A: It’s funny, everyone talks about how awesome the draft is because it’s the best feeling ever but I think it’s terrible when you’re sitting in that chair. Obviously in my situation I had no clue where I was going, I had a good idea of the range of where I might go, but for the time you’re in that chair it’s so nerve-wracking.  You’re just waiting to hear your name called, but once you get drafted, it’s the best feeling in the world, and to be on the same team as Nikita and Mitch makes it even more special, I also know a lot of guys that are drafted by them, so it’s pretty cool.  I feel pretty fortunate that I was drafted by such a great organization, I had the chance to go over there for Development Camp and everything was great, the staff, the rink, everything.  It was all really professional and I could tell early on that they’re a first class organization, and I’m fortunate to be a Devil.

Q: Being drafted by NJ also reunites you with your linemate back in minor midget, Jack Hughes, who just so happens to be the 1st overall pick. Talk about relationship with him and how cool it is to have your paths cross again on that stage.

A: It was really cool, first off I was really happy to see he went 1st overall to NJ, he’s a great player and a great guy, he really deserves it and I couldn’t be happier for him. To then be drafted by the same team as him and to see him again once I got to camp, hopping on the ice with him again was really cool. He’s an awesome guy to be around and he deserves all the hype that’s around him, but to see him at the rink it was just like minor hockey all over again, so that definitely pretty cool.

A: I’m really excited, I feel like we’re going to prove some people wrong, I feel like some teams are seen as more of favorites than we are, but I think we’re better than people think and we’ve got a great core of returning veterans mixed in with some young guys, so we’re looking forward to having another great season like last year.  Some guys are going to surprise a lot of people once they’re given a bigger role on the team.  I mean, let’s be honest, I don’t think a lot of people expected Felly (Tye Felhaber) to score 60 goals last year and I think that we have some guys that could break out like that.  I honestly believe some guys are going to surprise people that way once the season starts and our team will be a very competitive one this year too.

Q: With some of the teams’ leaders like Tye Felhaber, Sasha Chmelevski and others graduating to pro hockey, how much are you looking forward to having a bigger role on this team and how are you embracing that?

A: It’s exciting, going into a season where personally there’s going to be a little bit more weight on my shoulders, with some veterans leaving, I feel like now going into my third year I can be more of a leader and take on more responsibility.  I see there’s some younger guys that I can mentor, especially since I’m from Ottawa and I can show them around the city, and some things like that.  On a full team scale, and not just myself, everyone is going to have to take a step forward and try to fill in the important leadership roles that these guys have, and it’ll be important that we all push in the same direction as a team, but I think that we have the right guys in the locker room that can make it happen.

Q: Training wise, what have you been up to this summer and for the people who are wondering at home, what does a week’s workout schedule look like for you during the offseason?

A: I skate 4-5 times a week with skills coaches and skating coaches, I also have my own summer league team as well and we play once a week, so that’s pretty fun and it allows me to get on the ice a lot during the summer.  I’m also in the gym about 4-5 times a week as well, it’s good to get a good balance of both.  Obviously, it’s really important to be in the gym during the summer work on your body and have it be ready for a long season.

Q: There’s some food you can’t eat during the season that I’m sure you’ve been treating yourself to over the summer, what would be the cheat meal type of food you’ve had a lot of this summer?

A: People who know me well will tell you that I’m a big pizza guy, can’t do that too much in the season so I’ve definitely been having that a little and chocolate milkshakes, too, can’t go wrong with that.  I don’t do it too often, but it’s good to treat yourself a little bit like that in the summer.