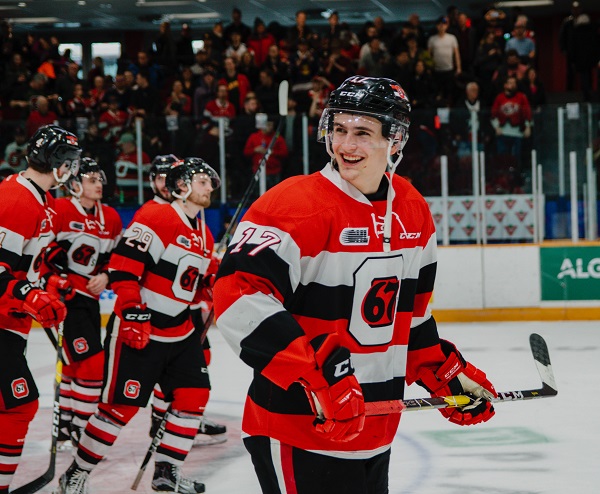 Next in our Ottawa 67’s Q&A series, we catch up with forward Mitch Hoelscher, who talks about his off-season, plans for next year and how it feels to be joined by two of his 67’s buddies in the New Jersey Devils organization.

Q: Tell me what your summer has been like… I’m sure you took some time off after the season ended, what did you do during that time off?

A: It’s been good, we had a long season so it was really important for me to take some time off and let the body rest as well as the mind rest and just be a 19-year-old kid again.  During that time I spent some time with my friends and golfed a little bit, so that was a good time and allowed me to recharge the batteries a little bit.

Q: What are some of the other things you’ve done over the summer to get away from the game a little bit?

A: There’s been a lot of things.  Last weekend I was at a fundraising baseball tournament back home, where it was lot of fun to rewind and see a lot of my old friends I hadn’t seen in a while and play some ball with them.  It was a good time and it was great catching up with them.  Other than that, I’ve been spending some time practicing some other sports and having fun, a lot of golfing too, so that was good for me and allowed me to kind of not think about hockey for a little bit.

Q: Did you go on vacation somewhere? If yes, where?

A: No, I didn’t really go anywhere special.  I did go to the Arkells concert, which was pretty cool.  One of my favorite moments of the summer was when we went to Austen Keating’s place, a lot of the boys from last year and other years prior met up there and we had some laughs.  We got to see some guys that we hadn’t really seen in a while and it was a good time to meet up with everyone during the offseason, it kind of felt like we’d never really left each other.

Q: After the amazing season that the team had – did not end the way you would’ve wanted it to, obviously, but has that made you even hungrier ahead of next season?

A: I think it’s exciting, we have playoff experience now, and we’ve been through it.  All these championship teams that you see, had to go through it and experience it to see what it takes to win. Last year we brought in Kyle Maksimovich and he helped so much with the championship experience that he had, and it had an obvious effect on the team. Now we’ve experienced it, we don’t need any more motivation than that. We saw what it takes and we’re motivated to go for a championship once again.

Q: Now that you’ve had time to let the dust settle and to appreciate how special of a season it was for the club, what can you tell us about this past year, the group of guys we had and the things you accomplished

A: Like you said, obviously it didn’t end the way we would’ve wanted it to, but when you sit back and think about it, we accomplished a lot of great things, 50 wins, playoff record, but the thing that sticks out for me was the bond that we had and that’s something that we’ll cherish forever.  When we went to Keat’s (Austen Keating) house it was cool to see everybody and it’s like we’d never left Ottawa for the summer.  We were really a big family in that locker room and I’ll remember that the most.

A: It’s exciting, I was really happy for him and Graeme both, I remember all year joking with Nikki (Nikita Okhotyuk) that he was going to be drafted by the Devils.  I was talking with our billet mom on draft day and she would say he was going to be drafted by Ottawa so that he’d be close to her, while I said that he’d go to New Jersey and when he got drafted by them I was like “oh my god, he’s a Devil”, so it was a really cool moment.

Q: Shortly after Nikita was drafted by the Devils, same thing happened to Graeme.  At that point you’ve got to be thinking it’s pretty unreal that two of your teammates are joining you?

A: Yeah, Graeme is another close friend of mine. I came in at 17 he came in at 16, so we’ve been buddies for a little bit now.  Obviously, he got drafted shortly after Nikita, so I was still kind of celebrating that, and then he got his named called by New Jersey as well, so I was really happy and excited for him, he’s a great hockey player and an even better guy.

Q: Talk to me about your second Development Camp, how cool of an experience it was and how different it was from your first, especially because you were with your friends this time around.

A: I felt a lot more comfortable, like I said Graeme and Nikita kind of made it that way just with their presence.  There were so many great players at that camp and it was not only a lot of fun, but also a great experience as a hockey player.  You go there and you learn so much, especially since you’re in a professional environment and are around so many good players.  You get better as a player over there and it’s a lot of fun.  With Graeme and Nikita, it made it that much better and it was cool for me to be kind of a leader and show them around town, the facilities and things like that.

A: I think it’s a really exciting year, everyone is really motivated to come back strong because we came up that short.  We have a lot of great core guys coming back so it’s going to be another good year for us and we’re all looking forward to get back out there.

Q: How much are you looking forward to having a bigger role on this team and how are you embracing that?

A: I think at the start of last year I was more defensive minded, I didn’t really have the offensive start to the season that I would’ve wanted to have, until we went out and got Kyle Maksimovich and Lucas Chiodo in trades near the deadline.  I started playing on a line with those guys and things just clicked offensively, so if I can bring that offense to the star of next season, I think I can earn some more ice time and it’s an exciting thought for me.

A: Obviously I need to get stronger and bigger, that’s the most important thing for me and I’ve dedicated most of my summer to that.  I’ve also been working really hard on my skating and getting more speed.  You see the way that the game has been trending these past few years and all those top end players have that elite skating, that’s something I want to add to my game as well.

A: It’s funny because it’s kind of the other way around for me, since I need to put on some weight, so it’s really been about what I haven’t been eating this summer (laughs)… Honestly, I’m not that big on junk food, but let’s just say there’s been a lot of protein in my diet, lot of steak, lot of chicken, since the start of the summer.