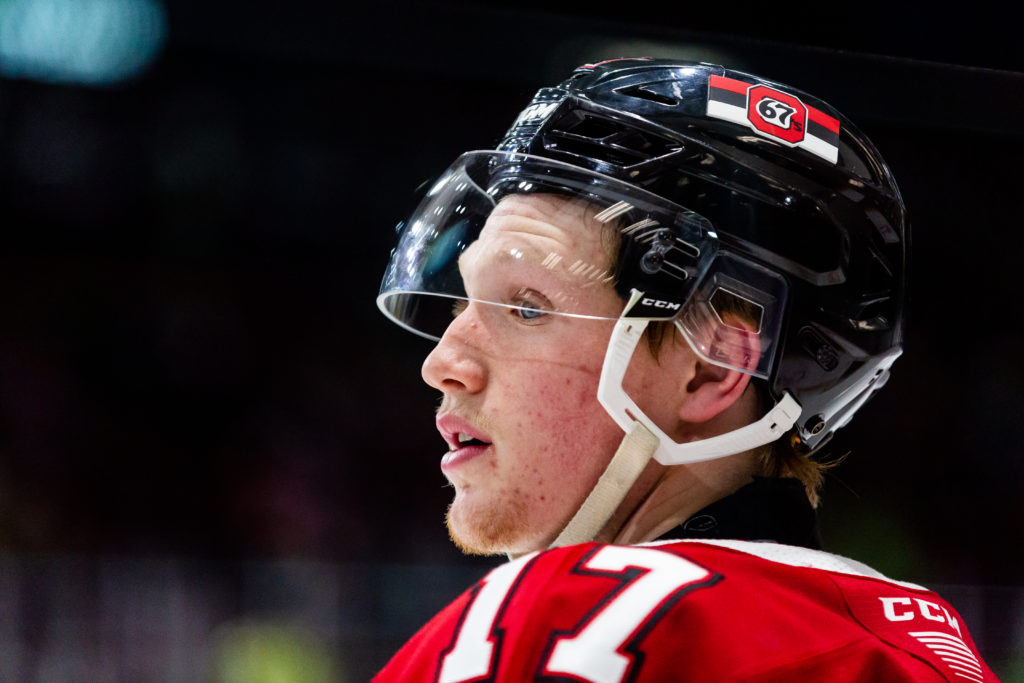 Though Brady Stonehouse has earned a reputation as one of the Ontario Hockey League’s biggest “talkers”, the Ottawa 67’s forward displays something of a different personality, off the ice.

The 17 year-old Stonehouse carries something of a quiet confidence, when he’s not working his way into the heads of his opponents. Be it in the gym, or just in casual conversation, his level-headed focus on being the best player he can be always shines through, no matter the situation.
In fact, it may even leave him in the best possible position to look back upon his rookie OHL season with the Barber Poles.

“I thought it was pretty good, personally speaking,” said Stonehouse. “I found my groove after the first couple of weeks, and established what kind of player I’m going to be in the OHL.”

Focused as ever, Stonehouse is fully aware of his reputation throughout the league.

“I’ve got lots of friends out there, as you can tell,” he said with a chuckle.

Word of Stonehouse’s effectiveness in both tangible, and intangible terms has extended well beyond OHL circles. Finding himself ranked as the 152nd North American skater by Central Scouting, he is expected to go somewhere between the fourth and sixth rounds in the 2022 NHL Entry Draft, taking place from July 7-8 in Montreal.

It’s not just his propensity for agitating the opposition that has drawn attention. Though it may — by his own admission — have taken some time for Stonehouse to acclimate to the OHL setting, he ended the season as the only member of the 67’s to appear in all 68 regular season games. He finished fifth on the team in scoring, and second among rookies, with 18 goals and 17 assists for 35 points.

Oh, and he also kept the Barber Poles consistently on the powerplay, drawing nearly a penalty per game, with 53 in total.

“I didn’t really have any expectations, I kind of just wanted to feel it,” Stonehouse said. “I’ve always said I wanted 20 goals as a rookie, and I came up two short, but I think that’s a pretty big feat for a rookie in the OHL, scoring 18 goals the first year.”

But with that first season in his rearview mirror, Stonehouse is approaching draft week with all the excitement that it deserves. It’s a dream that lives in the hearts of most young Canadians, growing up, and Stonehouse isn’t losing sight of the fact that he’s one of the lucky few who are likely to hear their name called on draft day.

“I’ve just been getting more eager now. I just can’t wait for the day. I’ve worked for this my whole life.”

While those who know Stonehouse would point to his stoicism, off the ice, he acknowledges the abundance of nervous energy that comes with the draft process. Perhaps even more so now, with the day-to-day grind of the OHL season behind him for at least another couple of months. It’s why he’s approaching the draft with one word in his mind: calm.

Stonehouse has no shortage of resources to get him through this period. Even aside from his agent, and his dad (a former hockey player himself), many a teammate has been through this process, and can offer something in the way of advice. Jack Matier, Jack Beck, and Tyler Boucher are NHL draft picks, and have emphasized the refrain of “stay calm, you’ll get your shot”.

Self-assuredness goes a long way, too. The fact is that Stonehouse knows exactly what kind of player he is, and what he brings to any team that calls his name during the draft. His fiery, two-way, thorn-in-your-side play style has drawn comparisons to the likes of Brad Marchand, and Brendan Gallagher.

“I feel like I’m a good two-way power forward, even though I’m not that big,” said Stonehouse. “I think I use my physicality pretty well, I go to the dirty areas, and I want to make things happen. I don’t want to wait for the play to come to me.”

Though eager to bring his game to an NHL roster, Stonehouse still finds himself excited by the prospect of rejoining the 67’s for the 2022-23 season. One of the youngest groups in the league, last season, the team defied expectations all year, and with a roster that appears set to return most of its players, Stonehouse is looking forward to seeing what a more veteran group can do.

“I feel like we’ll be a contending team next year,” he said. “That’s the attitude we have. This is our year, we’re going for the Cup.”