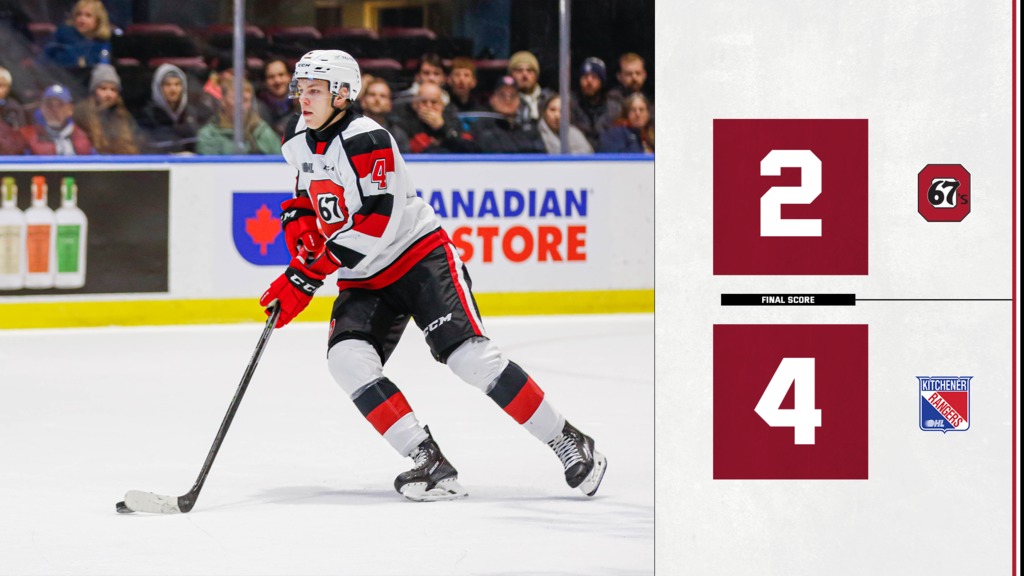 After two gutsy wins, the depleted state of the Ottawa 67’s may have caught up to them a bit, Friday night.

Visiting the Kitchener Rangers, and seeing plenty of offensive chances, the 67’s were outscored 4-2 by the home side, as they were unable to extend their winning streak to three games, despite 34 shots on goal. With Logan Morrison, Vinzenz Rohrer, and Tyler Boucher still out of the lineup, it was Cameron Tolnai, and Caden Kelly scoring to give the Barber Poles a chance late, while Collin MacKenzie made 25 saves in net.

The 67’s had a glorious chance to open the scoring in the game’s early moments, but a Pavel Mintyukov pass just missed the stick of Will Gerrior, who had a wide open net. Kitchener made no such mistake on their first scoring chance, 1:43 in, when Winnipeg Jets prospect Danny Zhilkin cut into the Ottawa zone, and fired a quick shot past MacKenzie for a 1-0 lead.

A Rangers powerplay didn’t yield results later in the frame, but right after Ottawa had killed off the penalty, the puck arrived on the stick of Francesco Arcuri near the faceoff dot to MacKenzie’s left, and the Dallas Stars pick had all day to convert, and make it 2-0.

The 67’s snapped back with a furious response in the second, having been outshot 16-6 in the opening frame. The Barber Poles had numerous powerplay chances in the middle period, but Marco Costantini held firm in the Kitchener net. The breaks continued to go the way of the Rangers late in the second, when a Mintyukov shot hit the post, and Los Angeles Kings prospect Francesco Pinelli stole the puck just seconds later, making good on a breakaway chance for a 3-0 lead, heading into the third.

Tolnai scored shorthanded with a little over eight minutes to go in the third, thanks to some great forechecking by Gerrior, and the 67’s poured on the attack as time wound down, but Zhilkin hit on an empty-netter to put the game out of reach. Kelly answered back just 10 seconds later, on a bullet shot from the slot, but that would be as close as Ottawa would get to extending their win streak to three.

The 67’s will have a chance to end this current road swing on the right note, Sunday afternoon, with a 2pm visit to the Owen Sound Attack. 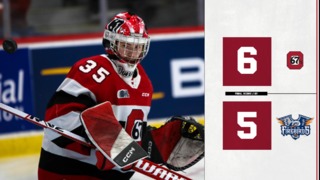