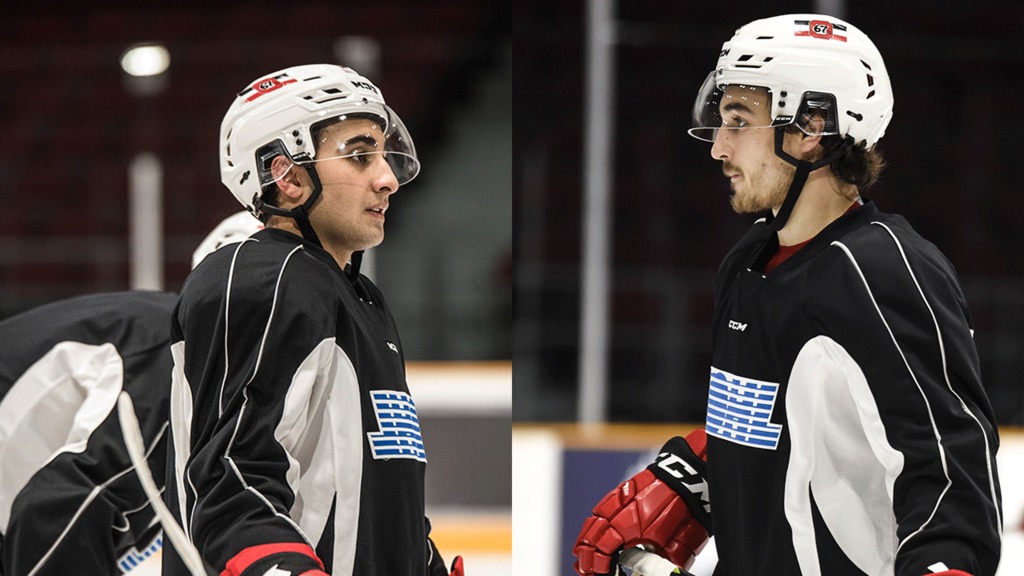 The Ottawa 67’s fortified an already strong lineup prior to this year’s trade deadline. A lot has happened this week so in case you didn’t catch all of it, here’s everything you need to know.

James Boyd and crew kicked off their week of transactions with a minor exchange with the Oshsawa Generals that saw the Barber Poles receive Hamilton’s second-rounder in 2020 and Oshawa’s fourth-round pick in 2021 and sent back London’s second-round selection in in this year’s OHL Priority Selection (2019).

The following afternoon the 67’s made their first of two big deadline acquisition. 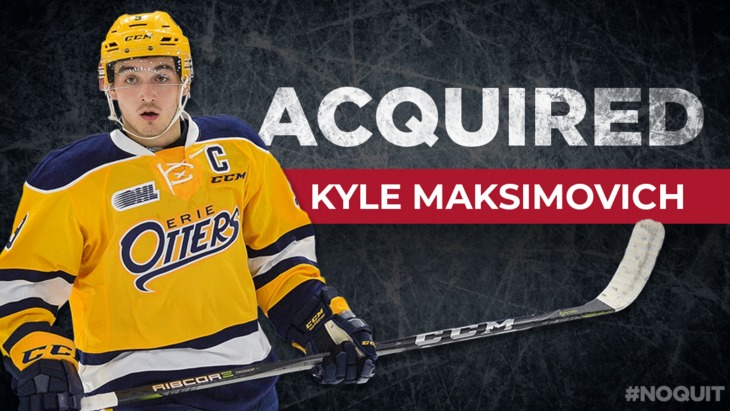 In a phone interview with TSN 1200 67’s GM James Boyd said that Kyle is “the best guy to fit into Coach Tourigny’s system” and was excited at the experience the overager brings into the dressing room having won an OHL title and been to a Memorial Cup with the Otters in 2017.

Maksimovich joins the Barber Poles with the third most points on the team with 23 goals and 33 assists for 56 points in 39 games this season.

Not longer having out he’d been traded to Ottawa, Kyle raced to his billets to pack up his things, jump in the car and head from Erie to Toronto to catch a flight to the Nation’s Capital. Kyle was greeted by the entire coaching staff and members of the team as soon as he got off the plane. 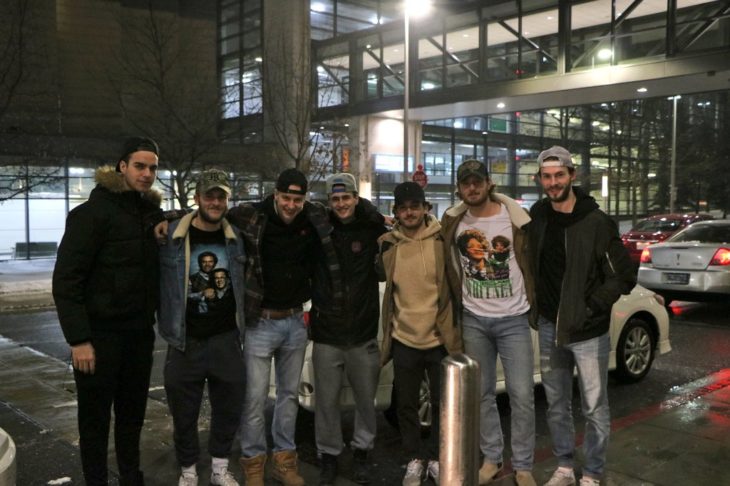 8:30am – Maksimovich practices with 67’s for the first time

It was a quick turn around for Maksimovich. 10 hours after arriving in Ottawa he stepped onto the ice at TD Place for the first time as a member of the home team. 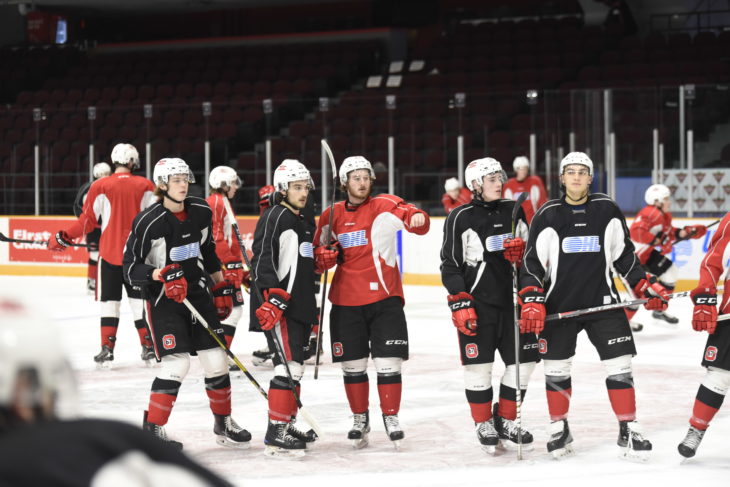 Following practice Kyle quickly got changed and came out to meet the local Ottawa media to chat about joining the Barber Poles.

After meeting the media Kyle then ran outside with the social media team to grab a photo with the welcome sign letting everyone on bank know about 613’s newest resident. Kyle would then head out to off ice training with the boys at Canadian Strength Institute. 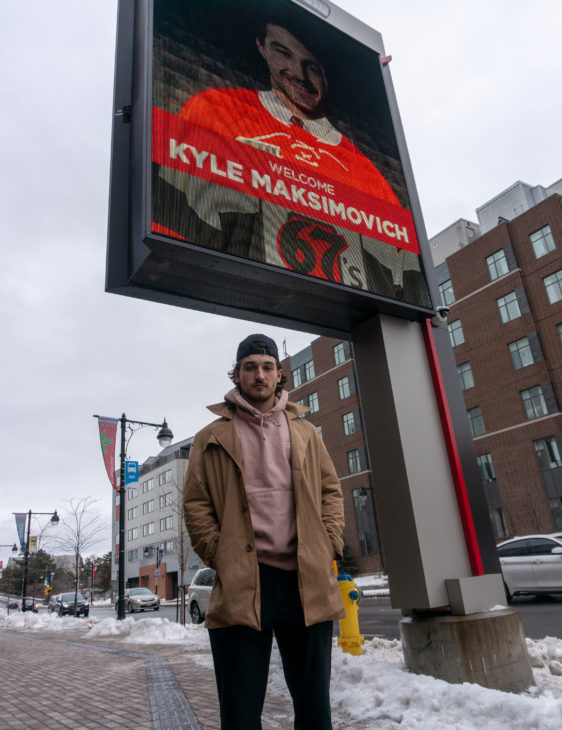 While everyone was focused on the acquisition of Kyle Maksimovich, James Boyd, Andre Tourigny and the rest of the 67’s staff we’re still inside a board room taking calls and exactly 24 hours after announcing the trade for Maksimovich it was announced the 67’s had acquired Lucas Chiodo from the Barrie Colts, making four of the Top 15 scorers in the league members of the 67’s. 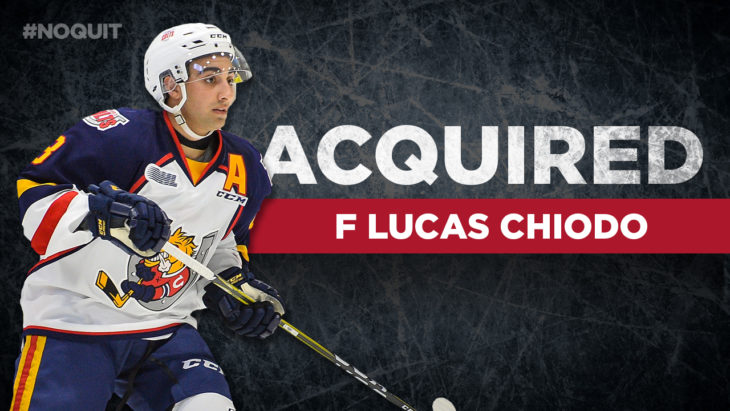 The 67’s sent back Sault Ste. Marie’s third-round pick in 2021, Kingston’s second-rounder in 2024 and the rights to overage forward Shaw Boomhower.

67’s head coach Andre Tourigny said he liked “a lot of things about Lucas; he’s a hardworking and relentless player who has playoff experience and that has been successful in the playoffs”.

Prior to joining the 67’s Chiodo had 19 goals and 31 assists in 39 games played for the Barrie Colts.

Following the trade members of the 67’s video and communications team caught up with 67’s GM James Boyd for comments on the two trades he’d made in the last 24 hours.

Less than three hours after finding out he’d been sent to Ottawa Lucas begins the journey by car from Barrie to Ottawa.

Lucas gets to The Arena at TD Place for the first time as a member of the 67’s.

Lucas would participate in his first practice with his new team prior to leaving for the weekend’s road trip. 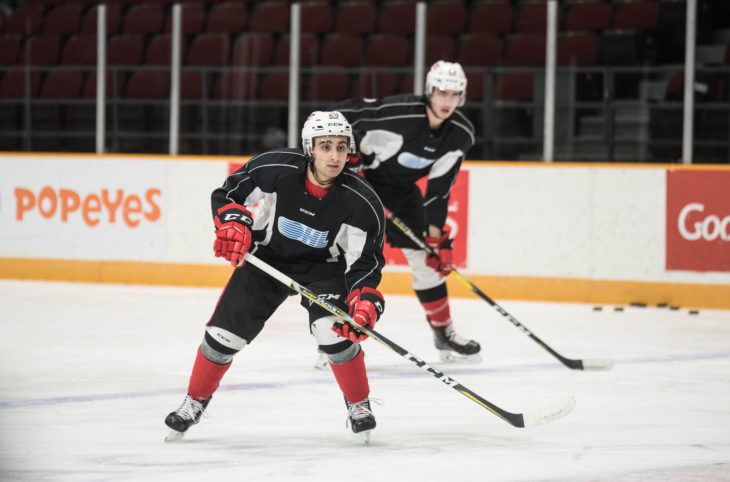 Lucas would chat with members of the 67’s video and communications team about joining the OHL’s top team.

Lucas joins the social media team outside to get a photo with his welcome sign. 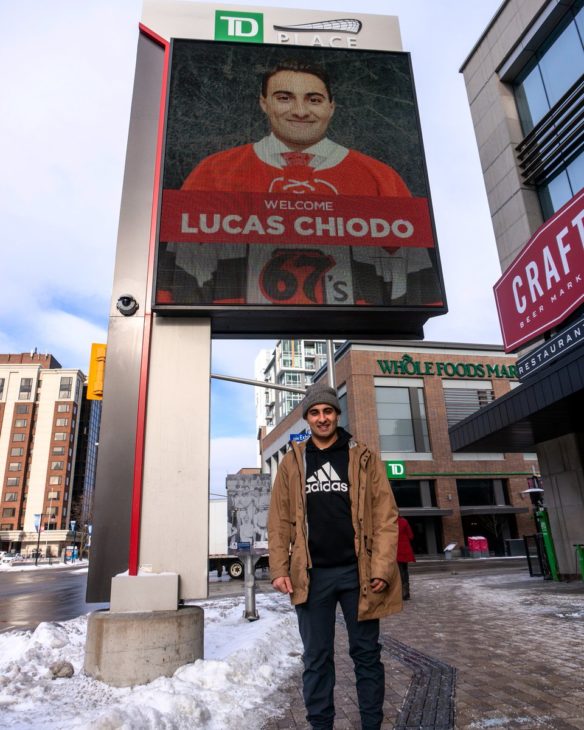 The Ottawa 67’s make no further rules and their final roster for the remainder of the season is set.

The new look 67’s hit the road for a 3 in 3 weekend that will see the club face a couple tough tests in the West leading London Knights on national TV on Saturday and then a match up against Guelph on Sunday who were also busy at the deadline.

Lucas and Kyle will make their home debuts next Friday night when the 67’s host the Peterborough Petes for Dunder Mifflin Night at 7:00pm. You can get tickets here. 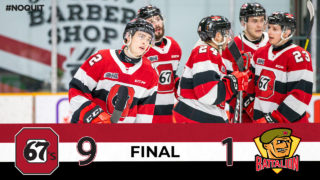