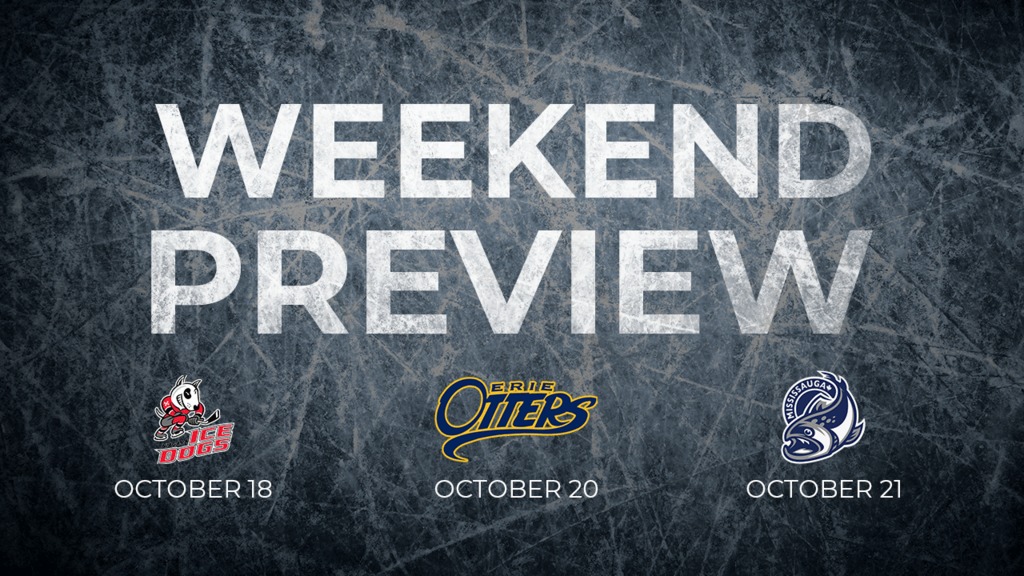 After sweeping a five-game home stand, the Ottawa 67’s will be on the road this week, playing three games between Thursday and Sunday.  During the five-game span, the Barber Poles outscored their opponents 23-10.  Forward Austen Keating leads the OHL in scoring with 3 goals and 16 assists, followed closely by his linemate Tye Felhaber, who has put up 18 points.  As if that wasn’t enough, the third member of this line, Austrian center Marco Rossi, leads the rookie scoring race with 12 points in 11 games, including 7 goals in his last 5 games.  Ottawa has collected 16 points in the standings so far with an 8-3-0 record, which ties them for most points in the OHL with division rivals Peterborough Petes.  This three-game road trip will be a challenge for the Barber Poles, as they will kick it off by facing one of the better teams in the OHL, the Niagara Ice Dogs.  They will then travel to Erie to face the Otters once again, before rounding out their trip in Mississauga on Sunday, October 21st.

One of the favorites heading into this season, Niagara has had a decent start to their year.  The IceDogs’ last game resulted in a 5-1 win over the Sudbury Wolves on Sunday.  The Dogs have scored five or more goals in five games out of nine this season, meaning that they are icing a very strong team offensively.  Led by LA Kings 2nd round pick Akil Thomas and Edmonton Oilers 5th round pick Kirill Maksimov, Niagara has a ton of fire power upfront, but also count on a very experienced back end.  Sitting in second place of the Central Division, behind the Mississauga Steelheads, Niagara will be looking to follow the same pace that the 67’s have set for themselves and for the rest of the league, especially teams that were seen as the ones that would be leading the pack before the year even started.  The IceDogs, being one of those teams, will have a lot to prove on home ice against the hottest team in the OHL right now.

After being the visitors at TD Place this past Sunday, the Erie Otters will be hosts to the Barber Poles on Saturday.  The Otters won their opening game of the season in a big way, with a 12-1 win over Flint, but haven’t been victorious ever since.  Currently on a 7-game losing streak, Erie is looking to dig themselves out of the whole they’ve put themselves into.  The team only has 28 goals for so far this season, with captain Kyle Maksimovich scoring 7 of those goals.  20-year old Maksimovich is obviously their key player, he who scored twice at TD Place when the Otters were in town.  Rookie defenseman Jamie Drysdale is a player fans will want to keep an eye on as well, being the youngest player of a very young team.  67’s fans remember what happened on Sunday, when the Barber Poles defeated the Otters 5-3 in a heated contest that saw the young Erie team give Ottawa a run for its money, so we can be sure André Tourigny’s team will not be taking the Otters lightly.

Off to a surprising start, the Steelheads lead the Central Division with 13 points in the standings.  So far this season in the OHL, only five teams have allowed less than 30 goals this season, Mississauga being one of them.  The Steelheads last played on Sunday, October 14th in a 6-2 winning effort in Sarnia, where forward Cole Carter had a hat trick.  The Steelheads will have a whole new look compared to the last time they played the 67’s.  The key players that were away at NHL camps for the first game of the season are now back.  They will now be counting on star forwards Ryan McLeod and Owen Tippett, who both have been ripping it up since coming back in the OHL.  McLeod has put up a goal and 10 assists in seven games for 11 points, while Tippett has 7 points in 3 games.  Both players will be ones to watch for the 67’s, who will be playing their third game in four days when they face off against Mississauga.

Tye Felhaber, right wing – “This weekend’s a huge test for us. You can’t take any of those games for granted”