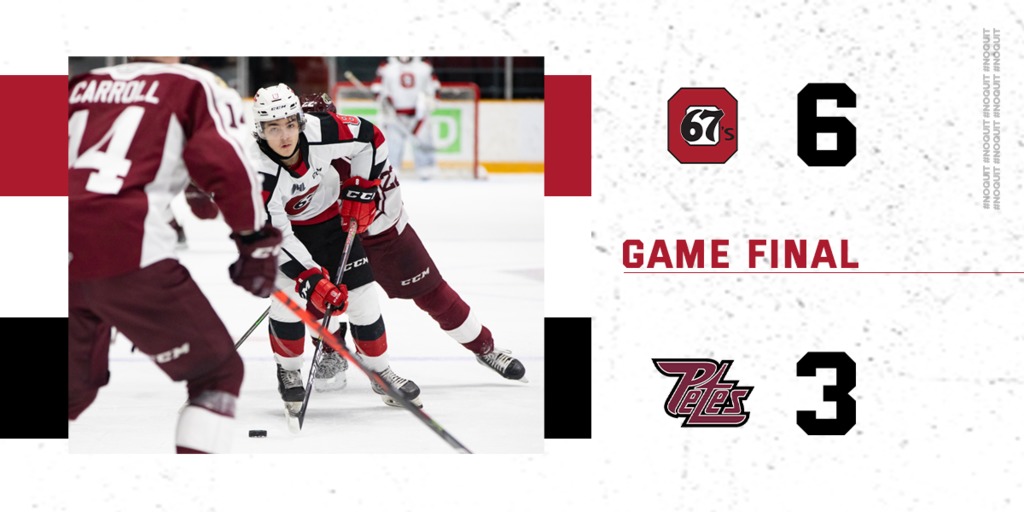 Trailing the Peterborough Petes 3-2 late in the game, the Ottawa 67’s roared back with four unanswered goals — three of which came on a five-minute powerplay — and the Barber Poles skated off with yet another come-from-behind win, by a final score of 6-3.

Jack Beck and Brenden Sirizzotti had two goals apiece, combining for six points, and Vsevolod Gaidamak and Jack Matier also found the back of the net, while netminder Collin MacKenzie earned his fourth straight win to start his OHL career, with a 24-save performance.

To open the game, the 67’s skated out with their new leadership group for the 2021-2022 season, with Beck, Matier, and Adam Varga, serving as alternate captains at home.

The Petes got on the board early, with Samuel Mayer potting one just 1:29 in, but it didn’t take the Barber Poles long to respond. On their second powerplay of the night, Cam Tolnai made a terrific dash to the net, and Beck corralled the rebound to tie it at 1-1, less than seven minutes later.

Sirizzotti lit the lamp with a wicked shot at the 13:32 mark, and the 67’s carried a 2-1 lead into the second period.

It took nearly the entirety of the second frame, but the Petes would answer back when Tucker Robertson’s quick shot off a face-off made it 2-2 with less than 90 seconds to go until the intermission.

Joe Carroll’s goal early in third had things appearing to go south for the 67’s, but just before the midway point of the frame, Sirizzotti put his second of the night past Liam Sztuska, and J.R. Avon was assessed a match penalty for slewfoot of Ranvir Gill-Shane, giving the lethalBarber Poles powerplay a five-minute opportunity.

In the span of 4:34, Gaidamak, Matier, and Beck all tallied powerplay goals, firing the 67’s out to a 6-3 lead that they would hold for the remainder of the night. 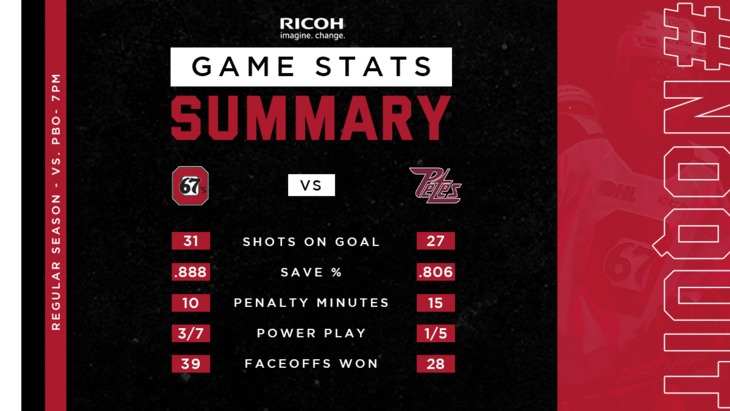