Red, White and Black: Three players to watch this season 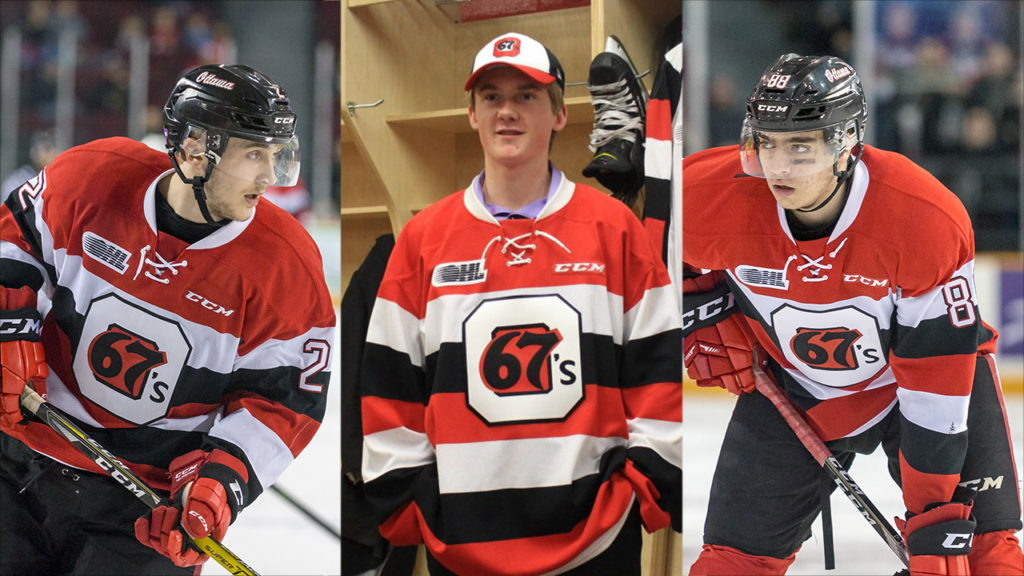 With the 50th Anniversary season of Ottawa 67’s hockey opening Thursday night in Barrie, here are three players in red, white and black worth keeping a close eye on this season.

Noel Hoefenmayer, D
The progression of the 18-year-old Hoefenmayer has been nothing short of remarkable since he kicked off his 67’s career in 2015. After a rookie campaign in 2015-16 that saw him record five points in 45 games, the North York native took several big steps forward last year as the anchor to a youthful blue line.

In 62 games, Hoefenmayer recorded 14 goals and 26 assists, production that would ultimately see him drafted in the fourth round, 108th overall, by the Arizona Coyotes. Fresh off a stint at his first-ever NHL training camp, Hoefenmayer is ready for another big year with the 67’s.

Kevin Bahl, D
Another young defenceman who turned heads last year is Kevin Bahl. The native of New Westminster, BC, stepped into the 67’s lineup as a 16-year-old rookie last season and proved to be the big body the club needed on the back end.

That steady, wise-beyond-his-years presence earned Bahl a spot on Team Canada at the 2017 Ivan Hlinka Memorial Cup, where he and the rest of the U18 squad captured a gold medal. Now 17, the 6-foot-6 Bahl is entering his draft year and looking to make big strides in his sophomore campaign.

Graeme Clarke
The Ottawa 67’s stayed close to home when it came time to make their first pick in the 2017 OHL Priority Selection Draft, selecting forward and Ottawa native Graeme Clarke. Now four months and change since he heard his named called, Clarke will make his regular season debut for his hometown Major Junior team on Thursday night.

It’s not difficult to see why the 67’s targeted the 5-11, 160-pound Clarke in the draft; the 16-year-old scored 36 goals and had 51 points in 33 games for the Toronto Marlboros Minor Midget AAA last year, which followed a 56-goal campaign in just 27 games in 2014-15 for his Ottawa Senators Minor Bantam squad.