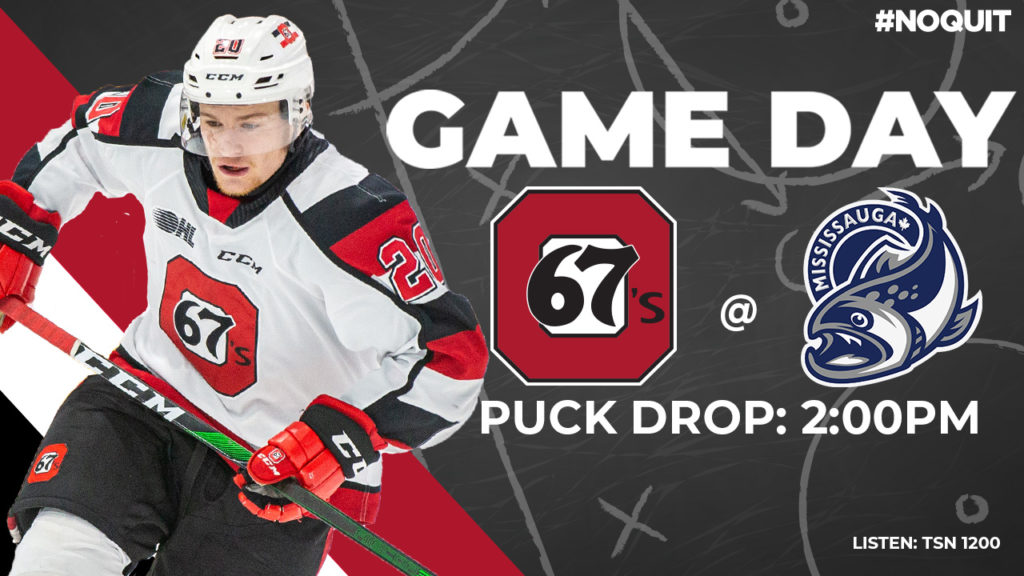 After seeing their latest ten-game winning streak come to an end last Saturday in Peterborough, the Ottawa 67’s bounced back in a big way the very following day when they hosted the North Bay Battalion, defeating them by a whopping final score of 9-1.  Now looking to start another win streak, which has been a habit for them this year, they’ll have to up their game this weekend as they have one of their more difficult sequences coming up, as they’ll be facing two very good teams in the Ontario Hockey League in the Mississauga Steelheads on the road Friday evening, the Windsor Spitfires at home on Sunday afternoon and the London Knights on Monday afternoon for their Family Day Game, featuring the 67’s well-known annual Wiener Dog Race.

In order to come out winners for those three games over the course of their weekend, the 67’s will need to be at their best, which is pretty darn good when you look at the number.  When you speak of “best” or “leading”, the 67’s come up a lot if you look at the OHL’s leader boards.  Marco Rossi leads the Ontario Hockey League in points with an impressive 94 points in 43 games, which also gives him the league’s best point per game average at 2.20.  Not only that, but Rossi does also lead the league in assists with 64.  For defencemen, Noel Hoefenmayer is the OHL’s best this season.  The overage forward is one of the drivers for this dynamic Ottawa offense with an OHL and CHL leading 71 points in 49 games, which could eventually lead him to become the first defenceman to hit 100 points in the OHL since Ryan Ellis had 101 points in 58 games with Windsor during the 2010-2011 season.  Speaking of leaders, the 67’s also count on the OHL’s leader in goals scored in Jack Quinn.  The Cobden native has been on fire as of late and has 44 goals this season to show for, which has explained his meteoric rise up the NHL draft rankings.  As a unit, the 67’s also count on the OHL’s top power play, who comes in at 31.0%, coincidentally followed by the London Knights at two (26.2%) and the Windsor Spitfires at three (24.3%).  Discipline will be a key factor for all teams looking to win these games over the course of the weekend, and as mentioned, to come out winners in these three matchups, the Barber Poles will need to be at their best

Currently standing at fifth in the OHL’s Eastern Conference, the Mississauga Steelheads have been doing well as of late, winning seven of their last ten games.  Having played twice thus far against the 67’s this season, two losses at TD Place, the Steelheads do count on some solid firepower that make them a threat to beat any team on any given night in the OHL.  2018 OHL eighth overall pick James Hardie has had quite the coming out party so far this season, exploding for 31 goals, which is more than twice what he had in his rookie campaign.  Along with Florida Panthers third rounder in 2019 Cole Schwindt, who has 61 points in 48 games this season, Hardie and Schwindt form one of the Eastern Conference’s most dynamic offensive duos.  Another key piece for the Steelheads is defenceman and Dallas Stars first round pick Thomas Harley, who has put up 51 points in 50 games so far this year, which has him in the top five leading point-getters for defencemen in Ontario.

The last time the Ottawa 67’s faced the Windsor Spitfires feels like forever ago.  However, the two sides faced off back on October 3rd, in what was Ottawa’s fifth game of the regular season, a thrilling matchup that saw the 67’s take it in overtime by a final score of 5-4.  The two sides, however, were completely different then.  Fully knowing what Ottawa brings to the table, Windsor is a very good team in their own right.  Fifth in the Western Conference, the Spitfires are currently battling for home ice advantage in the first round of the playoffs, and nothing could put the wind in their sails like a win against the OHL’s top team.  19 year old forward Tyler Angle leads the team in points with 55 (24G, 31A) in 49 games thus far this year, while another offensive catalyst for Windsor has a name that may ring a bell to 67’s fans; Egor Afansyev.   Afansyev, who used to be a 67’s prospect, was acquired by Windsor in the Mikey DiPietro trade that sent the goalie to Ottawa last season.  Afansyev was picked in the second round by the Nashville Predators last summer and went on to commit to the Spitfires.  He has 51 points in 49 games so far this season.  Another familiar name to Barber Poles fans coming back to TD Place for the very first time will be Matt Maggio, who was sent to the Spitfires over the summer in another deal.  Still young, Maggio has put up 2 goals and 8 assists for 10 points in 34 games.

It’s always a fun matchup when the Ottawa 67’s face off against the London Knights.  Fans will remember last year’s result when the Knights came to town, when Austen Keating beat the buzzer in overtime to give the 67’s the win.  Players, however, have very fresh in their minds the last game between the two sides.  Not only did the Knights defeat the 67’s 3-0 back on October 4th, but the way the game ended set up an intense rematch that was scheduled to take place four months later, as people will remember that the game ended with sparks flying between the two teams.  About 45 games later for both sides, the 67’s find themselves atop of their conference, while London is competing for the top spot in the West, three points behind the leading Kitchener Rangers with two games in hand.  On top of that, as of Friday, the Knights have won nine of their last ten contests.  As usual, London is filled with talent on their roster; World Junior standout Connor McMichael (85 points), San Jose Sharks first rounder Ryan Merkley (63 points) and another World Junior standout in Liam Foudy (44 points in 33 games).  The quality of these two team’s rosters, on top of the added spark from the last time they faced one-another, promises for a heated battle on Monday’s Family Day Game.

0:18
In The Community Ottawa 67`s
The team had someone special to read the starting lineups Sunday
20 hours ago