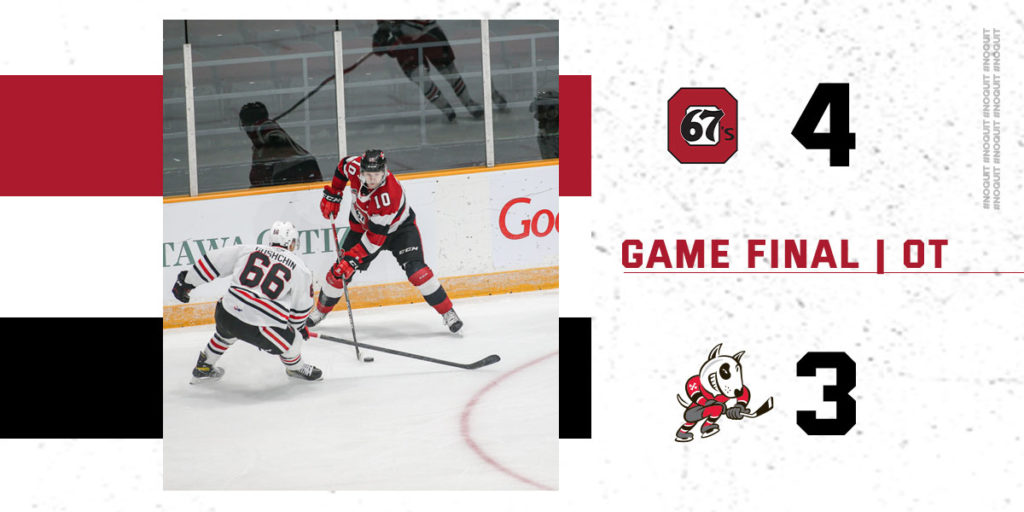 Vinzenz Rohrer was looking for redemption, after an unfortunate bounce saw him score an own goal that gave the Niagara IceDogs a 3-2 lead, in the second period.

“I think it just gives you an extra boost,” said Rohrer. “I think if you want to win a hockey game, you’ve got to put that behind you, and just do everything you can to get it back for the team.”

The Hockey Gods were kind enough to repay him. With the game in overtime, locked up at 3-3, Rohrer dashed into the Niagara zone, and fired his first career overtime winner past Josh Rosenzweig to give the Barber Poles a 4-3 win. The other Ottawa markers came by way of Will Gerrior, Brad Gardiner, and Alex Johnston, while Max Donoso stopped 26 shots for his second straight win.

“We’re doing a lot of good things, and what our young club is learning is that it’s a 60-minute game,” head coach Dave Cameron added. “You have to stick with it, and you know that there’s going to be ebbs, and flows, and momentum switches in these games. You have to recognize that, and play accordingly.”

It was a quick start for the 67’s, scoring just 4:20 in. Rohrer found Anthony Costantini at the point, and his shot was deflected home by Gerrior, whose second goal in three games made it 1-0 in favour of the home team.

Before the first period was done, however, Daniil Gushchin knifed in on a breakaway chance, and found the back of the net to tie it up for the IceDogs.

The second period began similar to the first, for the Barber Poles. Johnston chipped the puck to Derek Smyth at the Niagara blue line, and the defender made a gorgeous cross-ice feed to Gardiner. Gardiner’s one-timer beat Rosenzweig through the five-hole, and his second of the year restored the Ottawa lead.

Niagara found a lead of their own, not long after. Liam Van Loon tied the game at 8:12, and a little over five minutes later, Rohrer’s clearing attempt from the corner banked into the Ottawa goal. The marker was credited to Brenden Sirizzotti, his first with the IceDogs since being traded by the 67’s just a few weeks ago.

Undeterred, the Barber Poles brought the score back to even in the dying moments of the second period. Johnston’s hard forecheck forced a turnover, and he made no mistake in tight, tying the game at 3-3 with 1:12 to go in the second period.

The third frame solved nothing, despite both teams generating chances. In overtime, the Barber Poles weathered an early storm, before Brady Stonehouse fed Thomas Sirman, whose stretch feed hit Rohrer in stride, and the Austrian import iced the game with a beautiful individual effort.

“I had a situation that was a little unlucky for me, so I just thought to make the best out of it,” Rohrer said. “I just wanted, maybe not even a goal to bring us back, but just to make good plays. Just be the best player that you can, and forget what happened.”

Up Next: The Barber Poles host the Hamilton Bulldogs, tomorrow, at 2:00pm ET.