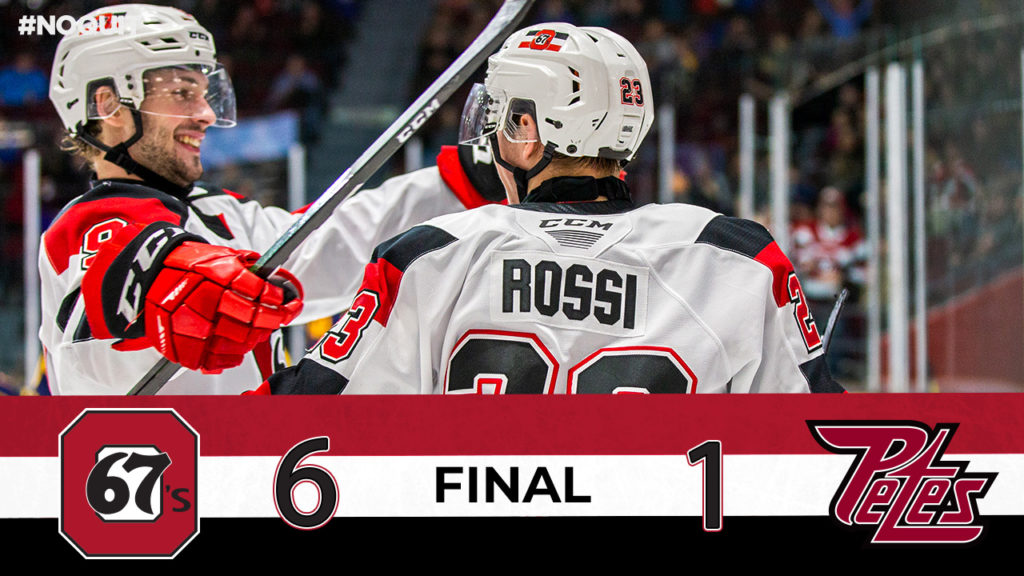 The Ottawa 67’s made it thirteen wins in a row on Sunday afternoon inside The Arena at TD Place, in a clash that involved the top two teams among the OHL’s standing, with the first place at stake.  Following this 6-1 wins for Ottawa, in which Marco Rossi had a hat trick and the other goals were added by Jack Quinn, Austen Keating and Noel Hoefenmayer, the Barber Poles now find themselves in first place of the Ontario Hockey League’s standings.

This game promised for a heated battle from the get-go, and the first period of action delivered exactly that.  Halfway through the opening frame, Peterborough’s Michael Little found a loose puck in the crease and was able to slip it by Cedrick Andree.  It only took two minutes and twenty seconds for the 67’s to answer, with a tic-tac-toe play from the first line, as Joe Garreffa sent it to Austen Keating, who then found Marco Rossi who threaded the needle.  Despite Ottawa out-shooting the visitors 20-9 in the period, both teams would head to the locker rooms all tied at one.

Kind of like in their previous game, the Barber Poles blew up in the second period, with three unanswered goals, coming from the sticks of Jack Quinn on an outstanding breakaway effort, Austen Keating, who punched in a rebound, and you guessed it, Marco Rossi once again.  The biggest moment in this period, however, was when the game was all tied at one halfway through the frame and the 67’s found themselves on a 5-on-3 penalty kill.  Ottawa’s PK stood strong and was able to set up Jack Quinn for a breakaway as soon as he stepped out of the box.  The rest was history.

Rossi finished off his hat-trick (his second this season) at 11:09 of the third and final period, before Noel Hoefenmayer blasted a puck behind Hunter Jones to make it 6-1 Ottawa, which would stand as the final score, making it thirteen wins in a row for the Barber Poles.

The 67’s will be back in action on Wednesday, January 1st, as they visit the Generals in Oshawa for a 2:05 PM start, before they host the Kingston Frontenacs the very next day inside The Arena at TD Place at 2:00 PM.

POST GAME COMMENTS
Associate Coach Mario Duhamel
“We knew we had to play a solid 60 minutes against them.  They’re a tough team to play against, they’re heavy and I thought we played well in the first, but they had some momentum.  The 5-on-3 that we killed during a 1-1 game in the second was huge, it then leader to Quinner’s (Jack Quinn) goal, and it ended up being a key moment in the game.”
“We stay humble and even keel, for us, it’s all about today and yes, we played well today, we’re happy with our performance and that’s why we’re smiling right now, because we knew we’d have to battle hard for 60 minutes, which we did, all lines and defense pairing contributed on top of our goalie, so it was a total team effort today.”

Forward Marco Rossi
“We feel really good in the room, we were very confident in the room before, and it’s not because we beat them by a big score that things should change.  Nothing changes, we’re happy about the win, but now we only have to focus about our next game against Oshawa.”