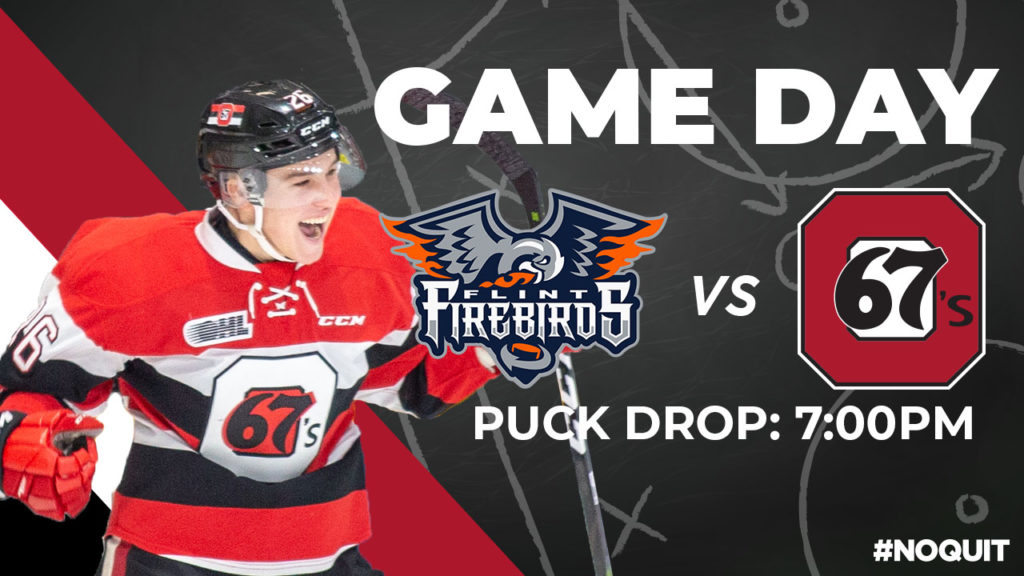 It’s well documented, the Flint Firebirds have had a difficult past couple of years, but this season, things have taken a turn for the better of the Firebirds.  Flint is currently atop of the West Division standings, in a three-way tie for the lead between themselves, Saginaw and Windsor and count on a very large amount of talented players on their team.  First year European forward Evgeniy Oksentyuk has been leading the charge offensively, along with Dallas Stars prospect and OHL veteran Tye Dellandrea, as they are tied for team lead in points with 19 apiece.  On the blue line, Florida Panthers second round pick in 2019 Vladislav Kolyachonok has been very solid in this start to the season with 12 points in 17 games.  Another offensive weapon to watch for Flint in this one would be the second overall pick in the last OHL Priority Selection Draft

After a very tough start to the season, Sarnia has turned things around.  After dropping their first seven games of the season, the Sting are now currently on a four-game winning streak and have won nine out of their last ten games. The catalyst on offense for this team has been Sean Josling, who is third in OHL scoring with 36 points (18G, 18A) in 17 games this year, but Sarnia also counts on great other offensive weapons such as Carolina Hurricanes prospect Jamieson Rees, who’s put up 26 points (10G, 16A) in only 11 games.  Sarnia also counts on former Ottawa 67’s forward Sam Bitten, who’s had a decent start to this season with 14 points (6G, 8A) in 17 games.  In goal, Sarnia counts on the experience of veteran goaltender Jordan Kooy, who came from London during the start of the season, as well as on talented rookie Benjamin Gaudreau who has been impressive thus far.

–          The 67’s have played once against one of these teams thus far this season.  The Barber Poles defeated the Sarnia Sting at home on October 27th by a score of 7-2.  Noel Hoefenmayer had four assists while Marco Rossi added three of his own.

–          67’s forward Marco Rossi is eight points away from 100 OHL career points.  He could very well reach that milestone over this road trip.

–          After competing in the CHL Canada/Russia series, Kevin Bahl will join his teammates for the road trip.  Bahl played in his 200th career OHL game against Oshawa on November 8th.

–          Mitchell Hoelscher is tied for the OHL lead in game winning goals with four.