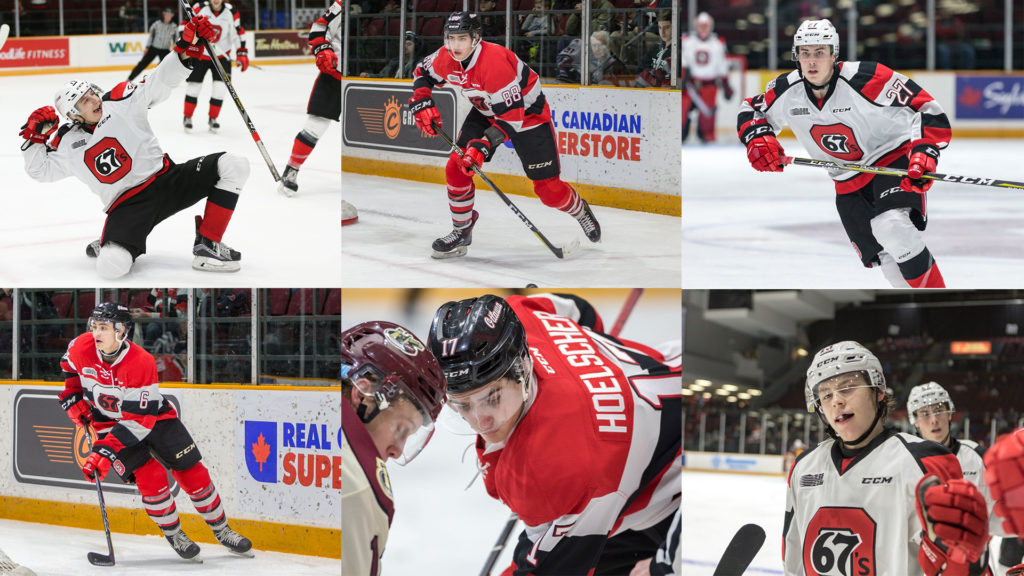 The Canadian Hockey League today announced that 140 CHL players appear in NHL Central Scouting’s Midterm Rankings for the 2018 NHL Draft which takes place June 22-23 in Dallas, TX. The 67’s lead all teams with six players included in the rankings. The domestic rankings list a total of 217 North American skaters including 126 from the CHL, also listing an additional 31 North American goaltenders including 14 that currently compete in the CHL.

All six members of the Ottawa 67’s find themselves in the Top 100 with right winger Kody Clark leading the charge at #28. Clark, who is having a break out sophomore campaign, has already tripled his offensive output from last season and isn’t far off a point-per-game pace. His father, Wendel, was a first overall draft selection of the Toronto Maple Leafs in the 1985 NHL Entry Draft. Both Clark and Bahl are among the 40 CHL players competing in the 2018 Sherwin-Williams CHL/NHL Top Prospects Game on Thursday, January 25 in Guelph.

At #30 is hulking defenceman Kevin Bahl. The six-foot-six, 231-pound rear guard has made the most of the experience he gained as a 16-year-old rookie last season and has stepped his game up in his second year with the Barber Poles. Even since Zdeno Chara became an elite defenceman with the Ottawa Senators and then winning a Cup with the Boston Bruins, NHL GM’s cannot deny the extra glances this give defenceman like Bahl.

Carter Robertson (61) is looking strong as a regular in the 67’s d-corp this season after missing 24 games last season due to injury. The recently acquired Ottawa native Merrick Rippon (63) has only improved his draft stock since returning home with five points in eight games. Mitchell Hoelscher (82) is making the most of his first full OHL season and has featured in 44 of the 67’s 45 games this year. Another Ottawa native on the list is Sam Bitten (94) who has six points in his last eight games and will look to follow in the footsteps of his older brother Will who was a third round pick of the Montreal Canadians in the 2016 NHL Entry Draft.

The 67’s have a crucial weekend ahead of them with a great opportunity to climb the Eastern Conference standings with games against each of the three teams above them – North Bay (Friday), Kingston (Saturday) and Oshawa (Sunday). The 67’s 50th Anniversary Season celebrations continue on Saturday when alumni from the 1997-2007 era are honoured including several members of the 1999 Memorial Cup winning team.