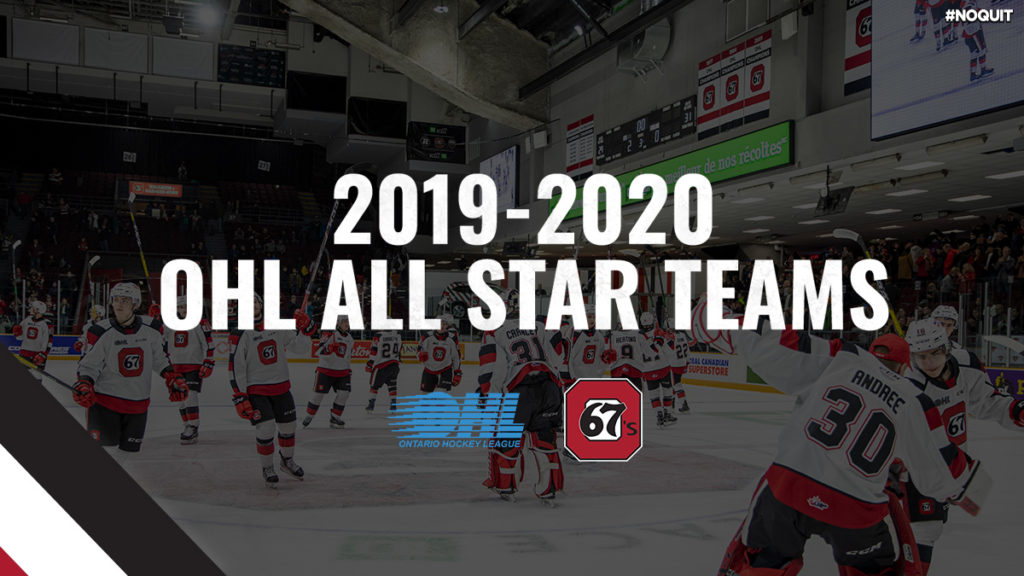 The Ontario Hockey League released on Wednesday their three year-end All-Star teams, which included a total of six members of the Ottawa 67’s: three in the First All-Star Team, two in the Second All-Star Team and one in the Third All-Star Team.

Selected to the Third All Star Team is goaltender Cedrick Andree.

Rossi dominated the OHL with 39 goals and 81 assists for 120 total points in only 56 games, leading the whole CHL in scoring.  Overage defenceman Hoefenmayer, on his side of things, was also dominant, putting up 26 goals, 56 assists for 82 points in 58 games.  Head Coach Tourigny led the team to a second straight fifty win season, with a record of 50-11-0-1.

On the Second All-Star Team, overage forward Joe Garreffa, who was in his first season with the 67’s, was also outstanding, with 36 goals and 54 assists for a total of 90 points in 52 games.  Joining him on this selection is fourth year 67’s defenceman Kevin Bahl, who had 6 goals and 25 assists for 31 points in 54 games, on top of being a defensive force night in and night out.

Finally, selected as goaltender for the Third All-Star Team, Cedrick Andree had another great season for Ottawa, clinching a second straight 30+ win season.  Andree had a record of 32-9-0-1, a GAA of 2.42 and a save percentage of .916%.

This is yet another honour for 67’s players, as five personal awards were won by members of the 67’s organization since the start of the offseason, prior to the unveiling of these All-Star Teams.