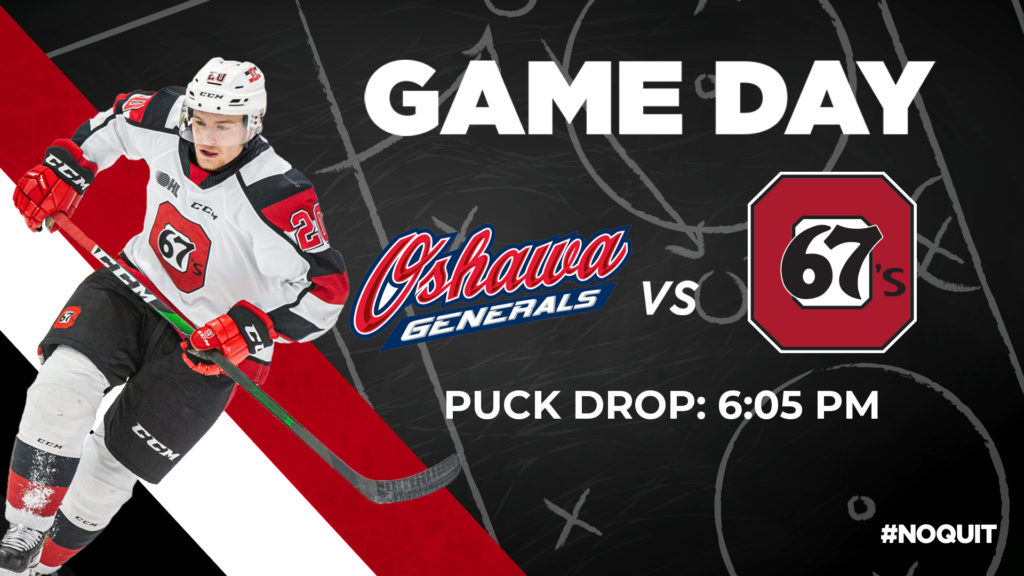 After seeing their franchise record 17-game win streak come to an end last Saturday in Peterborough, the Ottawa 67’s bounced right back with a win the very next day against the Owen Sound Attack by a score of 7-4.  Heading into this upcoming three in three week-end, the Barber Poles will look to carry on the momentum gained from that last win and following a good week of practice, are looking ahead to what won’t be an easy triple header.  Kicking things off in Ottawa, where they’ll face the visiting Flint Firebirds on Friday night before they go up against the Hamilton Bulldogs once again at home on Saturday afternoon.  They’ll round out a busy three days on the road in Oshawa against their division rival, who made a huge splash at the trade deadline.

The newest member of the 67’s, Daylon Groulx, has been a welcomed addition to the team, bringing in tons of energy, feistiness and production since coming in.  Groulx was able to find the back of the net against his old team, the Owen Sound Attack, last Sunday, while putting up two assists since joining, giving him a total of three points in three games with his new team.  Groulx has adapted well and even took Austen Keating’s spot on the first line next to Marco Rossi and Joseph Garreffa, as Keating was out for the Sunday contest and could be for this week-end as well.  Having won 9 out of their last 10 games and 19 of their last 21, the 67’s success can be explained by many things; it could be the OHL-leading 183 goals for, or it could also be the OHL leading 105-goals against.  It could also be because of the team’s lethal power play, who is the OHL’s best unit with41 goals on 134 occasions, good for 30.6%.  It could be because of the Keating-Rossi-Garreffa line combining for a total of 187 points, just like it could be because of Cedrick Andree’s league-leading 22 wins and league second-best three shutouts.  You’ll understand by reading these last few lines that there’s layers that explain the Barber Poles’ success, and it’s because they play as a unit.  The 67’s will look to maintain the good habits they’ve built so far this season by tackling this upcoming three-in-three head on, but they’ll need the help of their fans to do so, as they get ready to play back to back games inside The Arena at TD Place.

The Generals made some moves at the OHL Trade Deadline, dealing forward Serron Noel to the Kitchener Rangers for draft picks, before acquiring Philip Tomasino from the Niagara IceDogs in a blockbuster trade.  Tomasino has already conquered the hearts of Generals fans with 6 goals, 4 assists for 10 points in only three games in a Generals uniform, giving them an additional threat upfront and a huge boost ahead of this clash between two of the East’s powerhouses.  In addition to Tomasino, 67’s fans are very familiar with the Generals’ firepower; Brett Neumann, Ty Tullio, Kyle MacLean and a player who always seems to be on when facing the Barber Poles, Allan McShane.