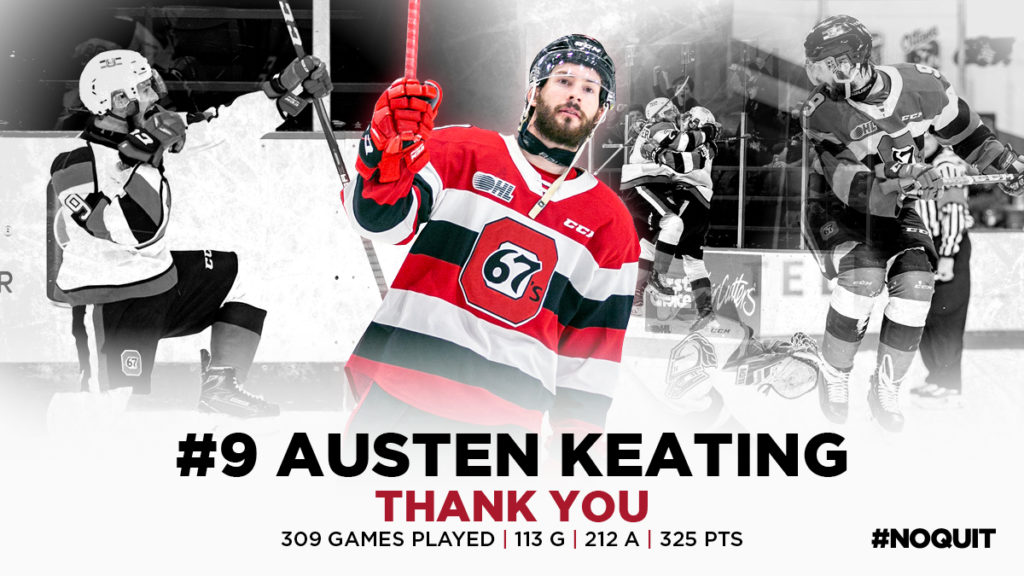 The first of a few tough goodbyes after the season came to an end earlier this week. Austen Keating finished his OHL career playing in 309 games, scoring 113 goals, 212 assists, and 325 points.

Keating collected his 300th point earlier this season on January 31st in Hamilton. Doing so, Keating became the thirteenth player in team history to collect 300 or more career points. Some of the most prestigious names in Ottawa 67’s history have hit that mark; Peter Lee (444), Bobby Smith (385), Andrew Cassels (377), Tyler Toffoli (333) and Denis Potvin (330), among others. None, however, had gotten to the 300-game mark. Prior to Keating, only two players in franchise history were able to play 300 games with the Barber Poles; Cody Lindsay and Thomas Nesbitt, who had both played 331 OHL games.

Austen Keating was drafted in the first round, 15th overall in the 2015 OHL Priority Selection Draft. Thus far, in 299 career OHL games, Keating has collected a total of 311 points, which has him only one point behind Corey Locke’s 312, which is good enough for twelfth in franchise history.

“It’s pretty exciting. When I first started out as a sixteen year old, I didn’t think I would’ve ever been able to accomplish that, a lot of it goes back to my teammates, the medical and coaching staff, who’s done a great job making sure I’ve been healthy and successful throughout my five years here, so it all goes back to them,” said Keating on hitting 300 games earlier this season.