The 67’s are confident heading into the weekend 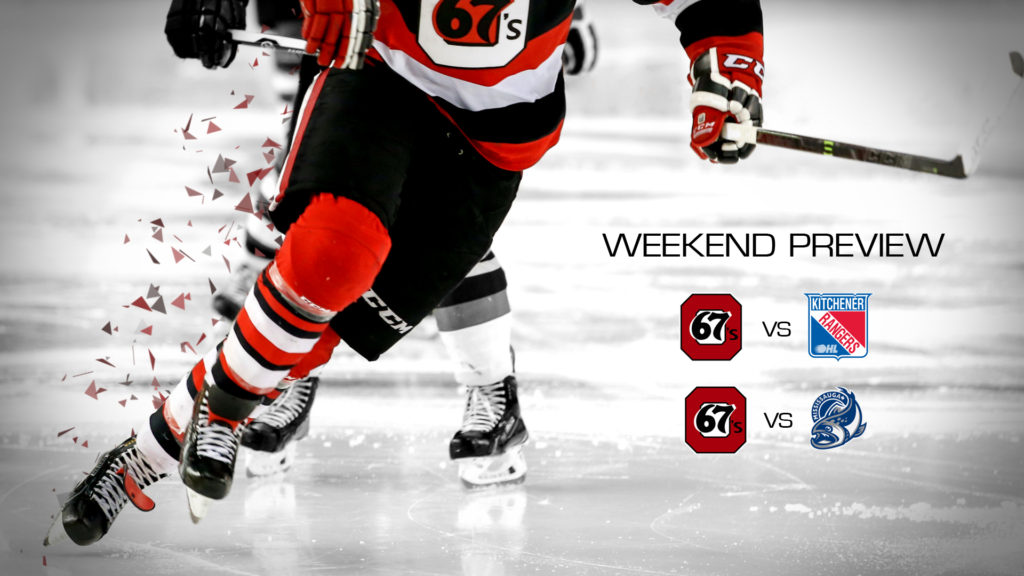 After picking up five points out of eight in their last four games and grabbing a crucial point in an overtime loss in Kingston Wednesday, the 67’s will wrap up their busy week with a pair of home games this weekend.

The Barber Poles will face Kitchener Saturday afternoon in a game where they will also celebrate the Grey Cup Winning Ottawa REDBLACKS, as players and coaches plus the Grey Cup will be at the game. Following that game, the 67’s will face Mississauga Sunday afternoon.

It’s a confident 67’s group that will enter this weekend’s contests and assistant coach Mike Eastwood expects his team to keep the recent form going.

“Last time we played at home, we found a way to win the hockey game, which is definitely a step in the right direction,” said Eastwood. “The guys are playing for one another and we are finding ways to win games, which gives us confidence going forward.”

In the past three games three 67’s defencemen scored their first OHL goals; Carter Robertson Kevin Bahl, and Ryan Orban all lit the lamp for the first time in the last week. While they were all pleased to finally get that goal, Orban believes that in order to have success the 67’s need to produce goals from the blue line.

“It was a huge load off of my shoulders, it maybe took a lot longer than I would have liked but still felt amazing,” said Orban. “To get scoring from the back helps a lot. We have a guy like Hoefenmayer doing a lot of the heavy lifting for the offensive side in the back, but it was nice for us to chip in and hopefully we can contribute a little bit more.”

Wednesday against Kingston, first-year goaltender Olivier Lafreniere had another stellar performance, stopping 31 of the 33 shots he faced, earning the third star of the game.  The 18-year-old netminder hopes to keep things going.

“As long as we win games, it doesn’t matter if I get 100 or 200 shots per game because all I want are the two points,” said Lafreniere. “We expect two tough games against Kitchener and Mississauga as they both have good teams.”

“We are looking for two good hard-fought battles and try to keep the shots below 45 a game, keep it simple for ourselves and get some points out of those games,” added Lafreniere.

Saturday, the 67’s will face a strong Western Conference team, as the Kitchener Rangers won six of their last ten games and are sitting fifth in the standings. This game will be the first of two between the two teams this season.

Sunday, the Barber Poles will wrap up their weekend with a clash against the Mississauga Steelheads and they will be looking to carry momentum from the last game against them, as Ottawa defeated Mississauga 5-4 in overtime three weeks ago.

Fans at Saturday’s 67’s game will have an opportunity to get their picture taken with the Grey Cup starting in the first intermission.