The Petes are in town for a rare midweek clash 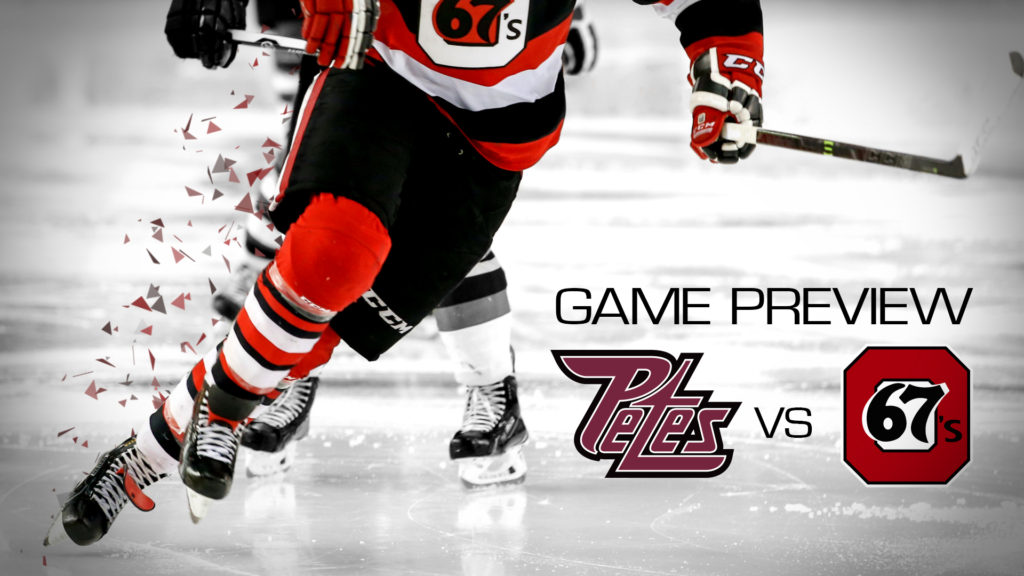 The Ottawa 67’s will look to get back into the win column on Wednesday night when the Peterborough Petes come to town for a rare midweek clash.

The 67’s will need these two veterans to continue their scoring ways in order to move up the Eastern Conference standings, starting with the Petes.

“We have to keep working on all the details of our game,” said Associate Coach Mike Eastwood. “We need to play great defence and pay attention in our own end.”

Currently sitting seventh in the Eastern Conference, they 67’s are three points behind the Sudbury Wolves. Eastwood knows his team has the firepower to score the goals they need but stressed the importance of “improving defensively to come together as a team.”

The Petes are coming off a 3-2 overtime loss to the Oshawa Generals, but have only lost once in regulation in their last eight games.

“They have loaded up this year and they’re going for it,” said Eastwood of the third-place Petes, though he pointed out Ottawa and Peterborough always seem to play tight games against each other. “They are a hardworking team and they’re well-coached.”

Among the weapons at Peterborough’s disposal is Toronto Maple Leafs prospect Nikita Korostelev, who has 20 points in 14 games for the Petes this year.

After Wednesday’s game, the 67’s have two home games on the weekend including the Red and Black game on February 12th as the 67’s take on the Sudbury Wolves. The will feature REDBLACKS players including Jon Gott and Brad Sinopoli and the entire Fury FC roster will be on hand. The Grey Cup will be on site for photos and there will be an autograph session during the game that will feature both Fury FC and REDBLACKS players. The game marks one of the last public appearances for the Grey Cup in Ottawa this off season.

Tickets for the Red and Black game and all other 67’s games this season are available by clicking here, calling 613-232-6767 x1, or in person at the Box Office at TD Place.