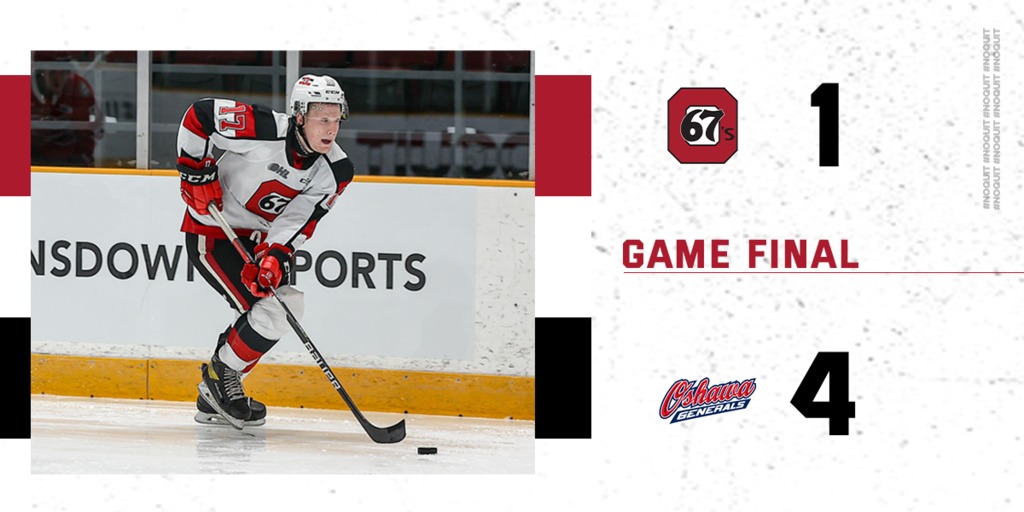 The Ottawa 67’s got out to another solid start, Friday, but just couldn’t put the finishing touches on their third consecutive win.

A Brenden Sirizzotti powerplay goal near the midway point of the second drew Ottawa even with the Oshawa Generals, but the visiting squad found two goals in the third, and added an empty-netter, to best the Barber Poles by a final score of 4-1.

Lost in the game’s final score was a lights-out performance by Ottawa netminder Will Cranley, who turned aside 28 Generals shots to keep his team in it, including a remarkable Save of the Year candidate in the second period.

The 67’s came storming out of the gate for the third consecutive game, carrying the play to the Generals early. 11 minutes into the first period, Ottawa held an 11-2 advantage in the shots on goal totals, with some big saves by Generals goaltender Patrick Leaver keeping the game even.

Oshawa responded from there, narrowing the shots on goal deficit, but Cranley was equally up to the task, highlighted by a sizzling glove save on a Thomas Stewart point shot.

Despite a later powerplay for the Barber Poles, it would be Oshawa that took a 1-0 lead into the second frame. A miscommunication at the Ottawa blue line resulted in a breakaway for Ryan Stepien, and he made no mistake on a backhand move to open the scoring.

Though they led the shots on goal totals 13-8, the 67’s headed to the second period down by one.

It didn’t take long, however, for the Barber Poles to get on the board and tie the game. On the powerplay, 7:04 into the frame, Adam Varga found Sirizzotti with a cross-ice pass at the top of the circle, and Sirizzotti let go a scorching wrist shot that beat Patrick Leaver up high.

Taking nothing away from Sirizzotti’s goal, Cranley was unquestionably the star of the second. After the puck took an odd bounce from behind the 67’s goal, Calum Ritchie was alone in front of a wide-open Ottawa net, before Cranley came diving across the crease á la Superman, for an incredible Save of the Year candidate.

The Barber Poles’ netminder continued his stellar performance from there, with a series of remarkable saves on the penalty kill, keeping the game tied at 1-1 heading into the second.

A valiant effort by Cranley unfortunately wouldn’t be enough in the third. Oshawa retook the lead 3:28 in, when Ryan Gagnier converted on a three-on-two chance, and Ritchie buried a one-timer that Cranley had no chance on just over eight minutes later, giving the Generals a 3-1 lead. Stepien would add an empty-netter in the dying minutes, handing the 67’s a 4-1 defeat.

Up Next: The 67’s are at home once again, Sunday, for a 2:00pm EDT puckdrop with the Sudbury Wolves.