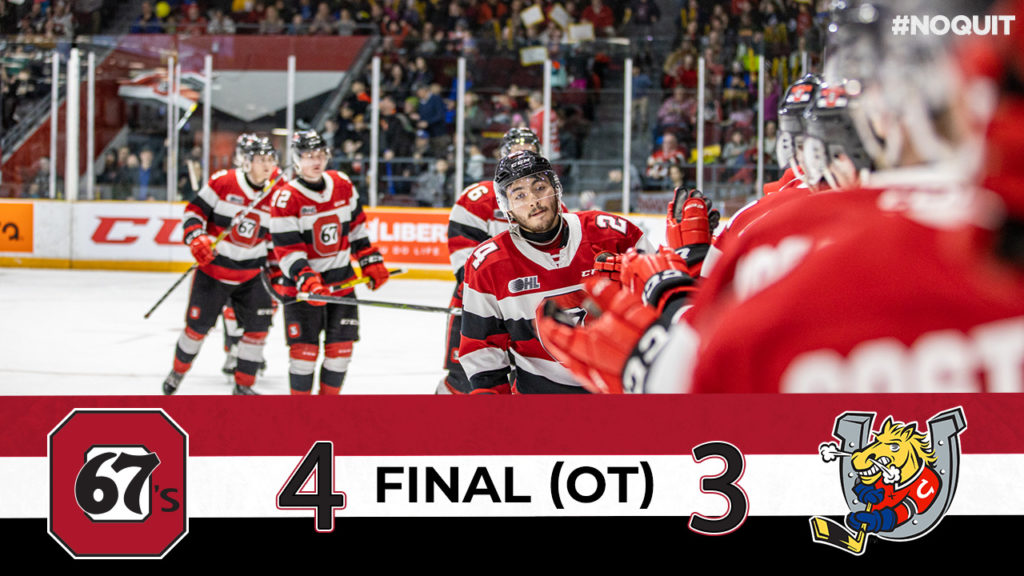 It was on a national broadcast game that the Ottawa 67’s defeated the Barrie Colts in thrilling fashion, defeating the by the score of 4-3 in overtime Saturday afternoon.  Jack Beck, Daylon Groulx, Joe Garreffa were the goal scorers for Ottawa in the first period, while Cam Tolnai threaded the needle in overtime with his seventh of the season.

The 67’s came out hard in this one and scored twice in the opening period.  First off, rookie Jack Beck made his presence felt on the national broadcast with his sixth goal of the season when he and Mitch Hoelscher broke out on a two on one.  Beck finished off a nice passing play by tapping the puck in an empty net just about six minutes into the game.  Daylon Groulx doubled Ottawa’s lead with a shot from the back of the net.  The puck had eyes and was able to trickle past goaltender Arturs Silovs for Groulx’s 15th of the season, giving the 67’s a 2-0 lead heading into the second period.

Evan Vierling and Tyson Foerster combined their efforts midway through the second period to score two goals in just over four minutes between the 8:24 and 12:45 minute marks, tying things up for the Colts at two goals apiece.  The tie didn’t last very long, however.  A minute and twenty seconds after Foerster’s tying goal, overage player Joe Garreffa gave his team the lead once again by picking up a loose puck in front of the net and slipping it between Silovs’ legs, making it 3-2 in favour of the Barber Poles with only twenty minutes left on the board.

Barrie tied the game once again in the back half of the final period, when Josh Nelson tipped a shot from the point that found a way past Will Cranley to even things up at three with 6:30 left on the board, sending the game to overtime.

With family and friends watching on the Sportsnet national broadcast from home, Cameron Tolnai gave the 67’s the win with a snipe over Silovs’ shoulder, lifting the crowd to its feet and giving the 67’s their 46th win of the season.

“I liked our third period, I think we played with more attention to detail.  We were on the right side of the puck, we battled and we had urgency, so I like the way we played in the third and we found a way.”

On Cam Tolnai’s play as of late…. “The last two weeks, he’s been playing really good hockey.  He’s holding on to the puck, he makes plays with it.  Cam’s always had the brain, it was a matter of making plays.  He was always able to play smart and play fast defensively, now he’s starting to do it offensively, so he needs that little swagger to try plays and make plays.  That was a hell of a shot.”

On playing with Joe Garreffa and Graeme Clarke… “Graeme and I had a bit of chemistry already from last year when we played on the same line, I know he has a great shot so I just have to feed him.  Joey’s got lots of speed and he’s a smart player, so I just need to find them, work hard in the corners and get the pucks for them and it’s working well.”

On scoring the OT winner on a national broadcast…. “It’s pretty nice, I know friends and family were watching back home so it was nice to score that one and have an interview on Sportsnet after.”