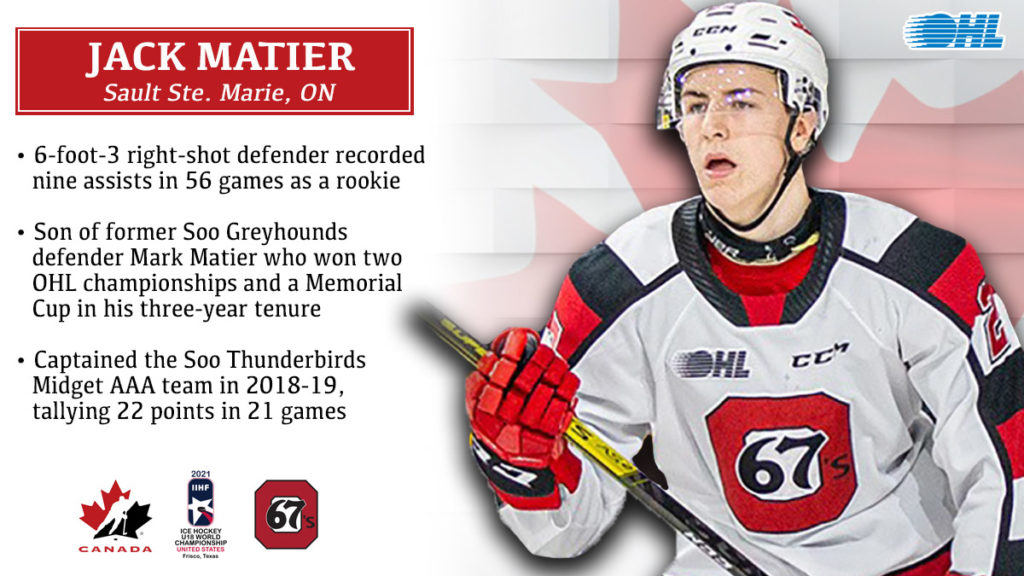 One of three OHL defencemen preparing to don the maple leaf in Texas later this month, 6-foot-3 Ottawa 67’s rearguard Jack Matier will be ready to go for his first action of the 2020-21 campaign.

TASTE OF SUCCESS
Ottawa’s first round (21st overall) pick in the 2019 OHL Priority Selection, Matier manned the blue line for the first place 67’s in his rookie season, recording nine assists over 56 games. He also finished with a plus-11 plus/minus rating on a back end that featured OHL Defenceman of the Year Noel Hoefenmayer along with New Jersey Devils farmhands Kevin Bahl and Nikita Okhotyuk.

NORTHERN ROOTS
Hailing from Sault Ste. Marie, Matier’s father Mark Matier was a mainstay on the Soo Greyhounds’ blue line from 1990-93, playing in three consecutive Memorial Cup tournaments. During his tenure, Matier’s Greyhounds won OHL championships in 1991 and 1992 before falling to the Peterborough Petes in 1993. The Hounds would have their revenge as tournament hosts though, defeating the Petes in the Memorial Cup Final.

FIRST TOUR OF DUTY
Matier, who didn’t participate in the World Under-17 Hockey Challenge, will be representing Canada internationally for the first time. He’ll have a chance to do it under the coaching of Canadian assistant Mike Stothers, a former Owen Sound Attack bench boss who was a big stay-at-home defender over the course of his professional career.

Matier and 12 other OHL players will hit the ice in Plano and Frisco, Texas  on April 27th when Canada opens its tournament schedule against Sweden.