Weekday Match Up vs Kingston 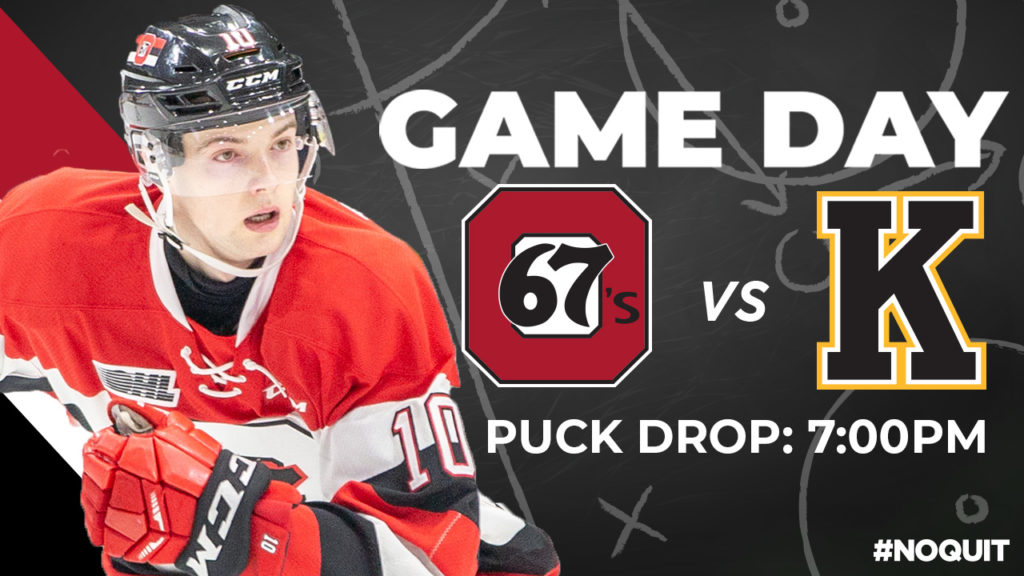 The Ottawa 67’s are currently riding a wave, with wins in their last four games and having won eleven of their last thirteen, it seems that the Barber Poles are back to their winning ways of the 2018-19 campaign, while counting on a much more different and younger lineup.  It’s no secret now that Marco Rossi is one of the best players in the Ontario Hockey League; the Austrian forward has put up a whopping 38 points (10G, 28A) in only eighteen games thus far.  Rossi’s line completed by Joe Garreffa and Austen Keating is looking like one of the more dominant lines in the circuit and has been leading the Barber Poles in this recent successful stretch.

Looking for their third win in as many games against Kingston this season, the 67’s still have very fresh in their memories the last game they played against the Frontenacs on October 14th, when it went all the way to overtime in a crazy 8-7 game, where Kevin Bahl scored the winner after Ottawa came back from a 5-1 deficit past the first period.  The first meeting between both sides was the 67’s third game of the regular season, a 3-2 overtime win once again, with the winning goal coming from the stick of Jack Quinn.  Ottawa will look for their first regular time win over the Frontenacs on Wednesday night on the road.

A team that has already battled against Ottawa twice this season, Kingston may be at the bottom of the OHL’s standings, but they definitely do have the respect of the 67’s, as both games played between the two sides this year have gone to overtime, including an 8-7 goal fest in mid-October that saw the Barber Poles come back from a 5-1 deficit.  Kingston, although they are probably not having the season they would want to have, count on some very talented and young pieces that will be the core group for this team for years to come.  Sophomore forward Zayde Wisdom has been showing some great things this season so far, with 20 points in 23 games, including 10 goals.  His 20 points area already double the amount of points he had last year (10 in 60 games).  It’s rookie forward Shane Wright, however, who was given exceptional status and granted permission to play in the OHL at 15 years old, who is  the main topic of conversation when Kingston is brought up.  Wright has been impressive in his rookie season thus far, with 18 points in 19 games (10G, 98A).  In nets, Christian Propp was acquired from the Soo back in mid-November and has been solid in his first three games, with a record of 2-0-0-1, a GAA of 2.59 and a save percentage of .922.