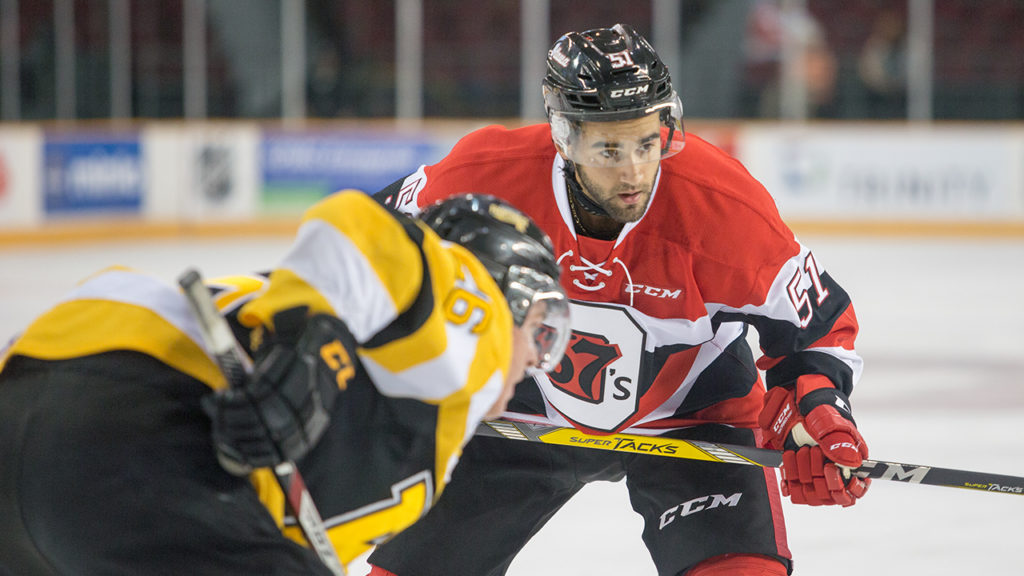 The Ottawa 67’s got over a heartbreaking loss from the night before the best way possible on Sunday, thanks to Patrick White’s overtime winner over the Kingston Frontenacs.

The 5-4 road win will make Thanksgiving just a little sweeter for Ottawa, who battled hard but came up short at home Saturday afternoon against the Saginaw Spirit.

On Sunday, the 67’s battled once again, coming from behind three times before two quick goals by forward Austen Keating gave Ottawa the lead, only to have Kingston come back and force overtime.

White, the Ottawa native and overage forward acquired by the 67’s during the off-season, picked a fine time – 3:03 into overtime, to be exact – to score his first goal in 67’s colours. Leo Lazarev made 35 saves to pick up the win, while Russian forward Artur Tyanulin had a goal and three assists to put him second in OHL scoring with 16 points. Keating, whose 13 points in eight games put him fourth in league scoring, Travis Barron and Sasha Chmelevski all had two-point afternoons.

The 67’s got off to a tough start midway through the opening period when Kingston’s Jason Robertson scored his third of the season to put the Frontenacs up 1-0. That lead would carry over to the second period, but just barely, as Chmelevski scored his fourth of the 2016-17 campaign before the second was two minutes old to even things up.

Just over three minutes later though, Ted Nichol put Kingston back on top before Tyanulin evened things up once again with his third of the year.

The Frontenacs would again take the lead in the third when Stephen Desrocher scored five minutes into the final frame, but a pair of goals from Keating in a two-minute span midway through the third gave the 67’s their first lead of the game.

Nathan Dunkley’s second of the season with less than three minutes to go in regulation forced overtime at the K-Rock Centre.