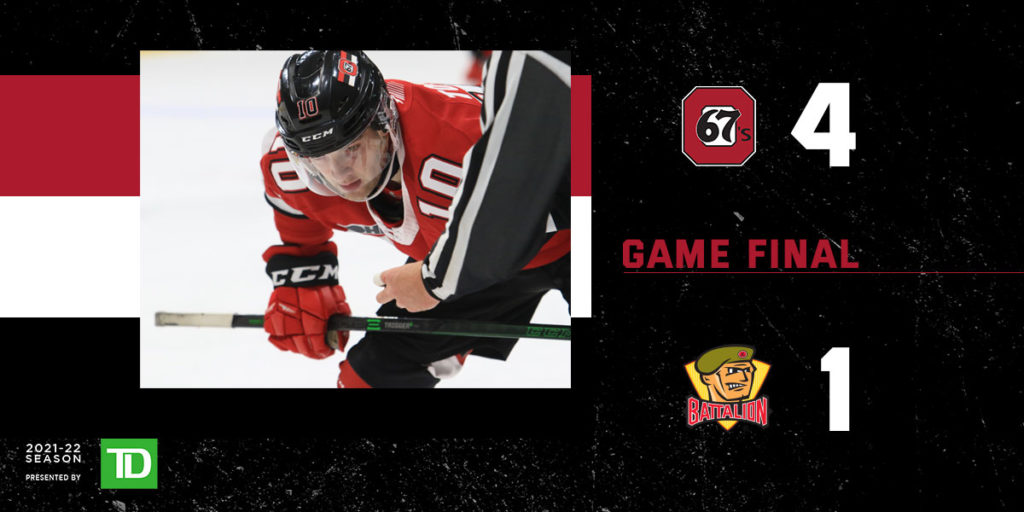 Those who laugh last, laugh best.

Rebounding from last night’s 3-2 defeat to the North Bay Battalion on home ice, the Ottawa 67’s responded with a win in enemy territory, downing the Troops by a final score of 4-1 from North Bay Memorial Gardens.

It was an afternoon of continuing streaks, for the Barber Poles. Brenden Sirizzotti opened the scoring in the second period, with his second point in as many games. Brady Stonehouse added another, giving him goals in back-to-back contests, before Vsevolod Gaidamak’s powerplay marker late in the frame gave him goals in three straight. Dylan Robinson added another in the third, giving the 67’s more than enough cushion to skate off with the win, coupled with a 26-save performance by Collin MacKenzie.

Dalyn Wakely had the lone marker for the Battalion.

After a first period wherein the two teams traded some quality chances but remained scoreless, things hit a fever pitch in the second. Just 1:32 into the frame, Sirizzotti took a shot from the point, and the puck found its way through traffic, past netminder Reece Proulx to make it 1-0 67’s.

Moments later, though, Wakely took a pass from Owen Outwater on a two-on-one and tied the game.

Not to be outdone, just 33 seconds after the score was tied, Adam Varga fed Stonehouse in the slot, and his bullet of a shot restored his team’s one-goal lead. It would be all 67’s from there, with Gaidamak’s power play one-timer at the 18:43 mark sending the Barber Poles to the third up by two.

Robinson deflected a Thomas Sirman shot past Proulx 11:02 into the final frame to make it 4-1, and that would be all for this afternoon.

Up Next: The Barber Poles return home for their second-last preseason game of 2021, hosting the Kingston Frontenacs on Wednesday, September 29. Puck drop is scheduled for 7:00pm EDT.