Will Cranley: Year in Review 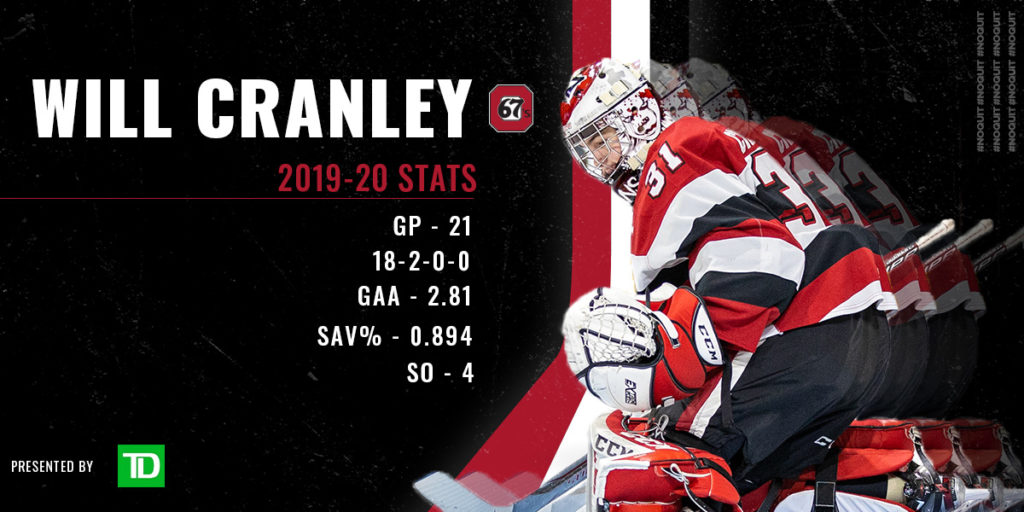 It was a very good sophomore season for 6-foot-4, 185 pound goaltender Will Cranley, which also happened to be his NHL Draft year.  The Peterborough native initially joined the 67’s during the 2018 OHL Priority Selection Draft, when the 67’s brass made him the 35th overall pick in the second round of the draft.  Since then, Cranley spent split his time between the 67’s and the CCHL during the 2018-19 campaign, but this past season was his true rookie year.  Cranley made great strides throughout the season and opened the eye of many NHL scouts with his big frame, his athleticism and his calmness in the crease.  His work with 67’S goalie coach Charlie MacTavish payed off big time, as he was ranked fourth best North American goalie by NHL Central Scouting in their final rankings, a huge jump from his midterm rank of 16th.  Let’s take an in-close look on what caused this jump up in the rankings and why Cranley has a great chance to hear his name called on Draft day in October.

As a 16-year old, Cranley appeared in 11 games with the 67’s during the 2018-19 season, backing up Cedrick Andree before the acquisition of OHL standout Mikey DiPietro, who would also go on to be the starting goalie for Team Canada at the World Junior Championships that year, on top of spending a full week with the Vancouver Canucks as an emergency backup, allowing Cranley to spend more time with the Barber Poles.  It was a learning and an adjustment year for the young rookie, but with the help of Andree, DiPietro and MacTavish, Cranley learned the ropes, as he spent the rest of that season with the Navan Grads of the CCHL.  He also went on to follow the 67’s on the road during their playoff run to the OHL Finals, watching and learning (even dressing after DiPietro went down to injury), which is a wealth of experience for a young first-year player.  Coming into his second season, Cranley was ready to be Cedrick Andree’s full time back up, and he did not disappoint.

Cranley played 21 games for the 67’s in 2019-2020, earning a standout record of 18-2-0-0, a goals against average of 2.81, a save percentage of .894 % and an impressive total of four shutouts.  On top of those numbers, which were enough to open the eyes of scouts, Cranley has the frame of a professional goaltender at 6’’3, 185 pounds, with still room to grow.  His athleticism for a player his size also stands out.

Cranley will have to patiently wait until early October, to hear his name called by an NHL team, as the Draft will be held on October 9 and 10.  Ranked the fourth best North American goalie, with still lots of untapped potential, some team may hit the jackpot by putting their hands on Cranley, who could turn out to be one of the better goalies in the OHL as his junior career advances.  Ottawa’s number 31 will certainly be looking to keep improving as he did last season and take his game to a new level in 2020-2021. 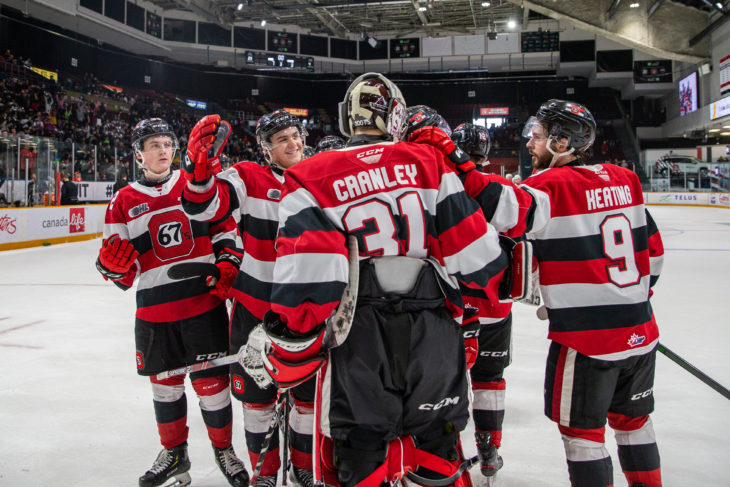