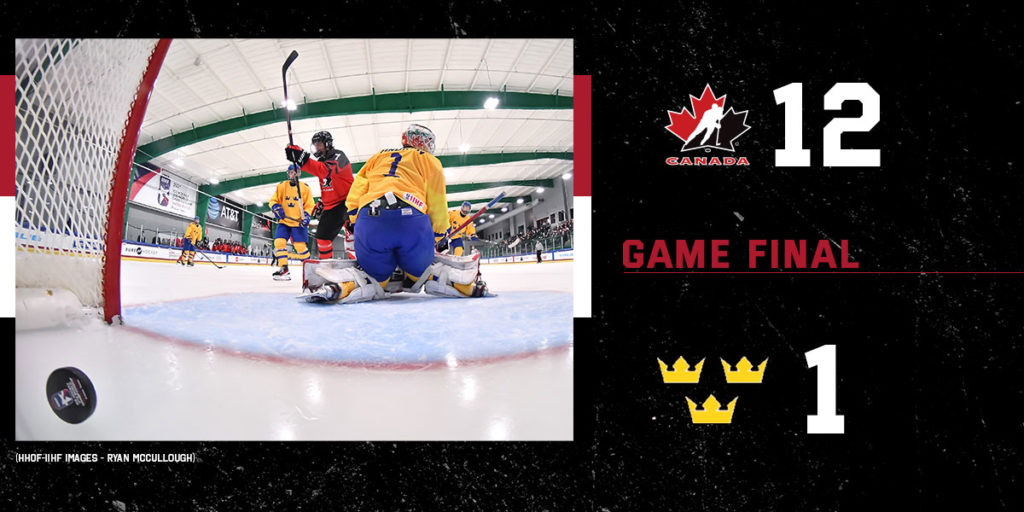 Captain Wright capitalized on his team’s first power play to open the scoring at 5:19 with help from Clarke and Dylan Guenther (Edmonton Oil Kings) before Clarke snapped the puck short side for a 2-0 lead midway through the first with an assist from Brennan Othmann (Flint Firebirds). Exceptional 15-year-old star Connor Bedard (Regina Pats) found Brett Harrison (Oshawa Generals) just over a minute later and Francesco Pinelli (Kitchener Rangers) rounded out the opening period with a fourth goal for Canada.

Shane Wright picks up a hatty and it’s 8-0 for @HockeyCanada #U18Worlds ?pic.twitter.com/vPNYCxAfXQ

Mason McTavish (Peterborough Petes) sniped early in the third to make it 9-0 and Clarke potted his second of the night to help Canada reach double digits as Chase Stillman (Sudbury Wolves) and Pinelli tacked on helpers. Simon Forsmark brought the Swedes on the scoreboard at the 11:17 mark before markers from Wyatt Johnston (Windsor Spitfires) and Logan Stankoven (Kamloops Blazers) brought Canada up 12-1.

“We know we are not going to dominate every game, but I think we followed our systems very well tonight,” said Pinelli, who finished the game with a goal and two assists. “We need to stick to our game plan, keep playing well and communicating with each other, and that will go a long way. We did that tonight, and we are going to have to continue doing those things game in and game out.”

“It was a big win for our team and a lot of things went right for us tonight, but not every game is going to go this way,” added McTavish. “We are going to dissect the stuff we didn’t do well and [head coach Dave Barr] will take us through some video, but we know there is a lot of work that still needs to be done in order for us to be successful.”

Canada outshot Sweden 47-29 and Thomas Milic (Seattle Thunderbirds) was good for 28 saves in the victory. Clarke was recognized as Canada’s Player of the Game.

The Canadians step right back into action Wednesday night against Latvia at 9:00 pm ET on TSN.